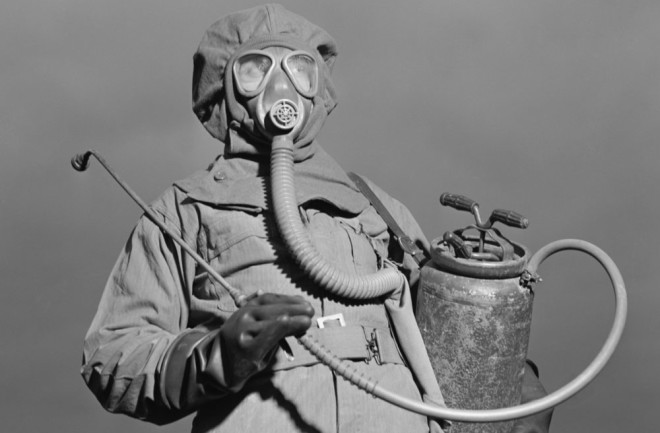 A World War II-era contamination suit. (Credit: Shutterstock) In January 1958, two medical officers at Porton Down, Britain’s military science facility, exposed their forearms to 50-microgram droplets of a substance called VX, which was a new, fast-acting nerve agent that could kill by seeping through the skin. VX, short for “venomous agent X,” is tasteless, odorless and causes uncontrollable muscle contractions that eventually stop a person’s breathing within minutes. That experiment in 1958, according to University of Kent historian Ulf Schmidt, was perhaps the first human test of VX in the Western world. Though VX is outlawed under the 1997 Chemical Weapons Convention, it was used to kill North Korean leader Kim Jong-un’s half-brother, Kim Jong-nam, in Malaysia last week. North Korea maintains the third largest stockpile of chemical weapons, trailing only the United States and Russia, according to the Nuclear Threat Initiative project. As such, South Korea has pinned blame for the attack on the North Korean government, and the use of a banned weapon may increase pressure on the international community to formulate a response. Given these recent developments, it shouldn't come as a surprise that this lethal chemical agent has a checkered, infamous past. In the mid-1990s, the Japanese cult Aum Shinrikyo used VX in attempts to kill three people—one was successful. In 1969, the U.S. Army admitted that VX was responsible for the deaths of 6,000 sheep in Utah. But VX was trouble from the very start. You see, that first first-of-its-kind human trial in 1958 at Porton Down was actually an unauthorized experiment conducted in shadows, as Schmidt revealed in his 2015 book “Secret Science”.

In 1952, researchers at the British Imperial Chemical Industries (ICI) and Sandoz Ltd., a pharmaceutical company headquartered in Germany, discovered a collection of organophosphorus compounds that could serve as powerful insecticides. Two years later, ICI actually went to market with one of those compounds in a product called Teteram, but it was pulled in 1958 after it was deemed far too toxic for use in commercial agriculture. However, the toxicity of these compounds caught the attention of military scientists in Britain, Sweden, Germany and the Soviet Union, and scientists started experimenting with these so-called V-agents. In the early 1950s, Britain was phasing out its chemical weapons program, but the power of V-agents rekindled interest, and British military scientists went on to develop their own V-agent variant, called VX. According to Schmidt, Britain believed developing expertise in this chemical weapon would give its government a leg up in negotiations with the United States “over urgently needed nuclear weapons technology.” Not only did scientists hope to develop offensive capabilities with V-agents, they also wanted to develop countermeasures. So, to maintain Britain’s strong bargaining position, scientists in Porton Down’s Medical Division in 1958 pushed hard to obtain permission to inject diluted samples of V-agents into humans in order to assess their toxicity and learn more. The proposal was met with a wall of resistance. The British government and scientific community was still shaken following the death of 20-year-old Leading Aircraftman Ronald Maddison, who died after taking part in sarin nerve agent toxicity tests at Porton Down a few years prior in 1953. On May 6 of that year, 200 milligrams of sarin was dripped onto his arm, knocking him unconscious within 30 minutes. Maddison would die before the end of the day. A coroner’s examination was held in secret, for reasons of national security, and his death was attributed to “misadventure.” In the wake of Maddison’s death, the British government’s concern over the safety of toxicity experiments was at a fever-pitch, which in turn yielded a long and complicated approval process for human toxicity experiments. Fearing the Soviets might already have their own V-agent, Porton scientists ignored the slow-moving, bureaucratic process and went ahead with unauthorized experiments.

According to Schmidt, William Ladell, assistant director of the Porton Medical Division, and a colleague were the likely voluntary subjects of that first VX test in 1958. They survived the test with no apparent side effects—it was half the lethal amount. When officials found out, Laddell argued that he and his staff were “at liberty to use their own skin” for experiments, Schmidt writes. Officials were growing concerned that Porton's scientists were all too eager to go rogue. As a result of insubordination, scientists at Porton were instructed to cease all human experiments, and for 15 months following, tests were restricted to pigs. Details of VX were eventually passed onto the U.S., and by the end of the 1950s, Van M. Sim, the director of human research at the Edgewood Arsenal in Maryland, began his own self-experiments with the chemical. He followed this work with a wider experimental program that included hundreds of research subjects, most of them servicemen. By 1962, the United States began mass production of VX at the Newport Chemical Plant in Indiana, pushing out nearly 10 tons of the substance a day. In all, nearly 7,000 troops took part in chemical research programs at Edgewood from 1955 to 1975, where other chemicals like LSD and ketamine were also tested.

Decades later, a lot has changed. Following the Chemical Weapons Convention, the U.S. began incinerating its stock of VX, disposing of the final batches by 2012. In 2002, the United Kingdom’s High Court quashed the verdict that Maddison’s death was caused by “misadventure,” and ordered a new inquest. By 2004, the court ruled that Maddison was unlawfully killed at the hands of the state, concluding his life was taken by the “application of a nerve agent.” It was a landmark case that opened the door for the claims of other servicemen who were exposed to toxic chemicals during Cold War experiments. In 2009, eight Edgewood veterans joined together with the Vietnam Veterans of America and filed a class-action lawsuit seeking medical benefits from several defense agencies. The lawsuit also required Department of Defense officials and the Department of Veterans Affairs to track down veterans involved in those experiments and provide them with details of the chemicals they were exposed to and their health risks.

In 2015, the Ninth Circuit Court of Appeals ruled that the Army must keep Edgewood vets apprised of health concerns and provide them with any updated health information. The Department of Defense, as detailed in a three-volume set of studies by the Institute of Medicine, argued that the experiments did not cause any long-term health effects in test subjects.

One of the most sinister characteristics of VX is that it has the consistency of motor oil, which means it tends to stick around in the environment wherever it's deployed. Given the recent news from Malaysia, it seems VX, in a different sense, is just as sticky.