Vital Signs: Why Is He Limping?

The injury seemed recent, but its origins were not. 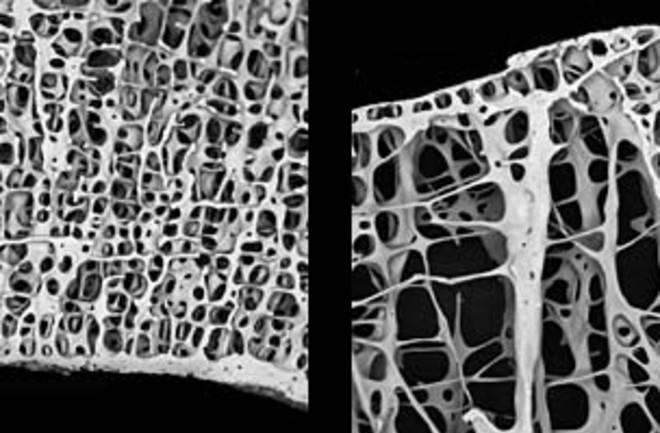 Healthy bone structure of a 41-year-old male (left) compared to a 75-year-old male's osteoporotic bone (right). Both images taken at a magnification of 8X. | Alan Boyde

My patient, a pastor, was visiting a prison several months ago when a sudden, severe pain in his left hip pulled him up short. Had he been attacked by an inmate? He glanced around and then down at his hip. Everything looked fine, but the ache was intense. When I saw him in my office a week after it happened, he was concerned that his hip might be broken. I didn't believe that anyone could be walking around on a broken hip, certainly not for a week. Still, based on what I knew of his history, I was worried.

When we first met several years earlier, he was only 57, but he had the severe forward bend in his back of an older man. The curvature in his midspine had evolved painlessly, he said, over the previous 5 to 10 years. As we shook hands, I noticed something else: His palms were yellowish orange. Excessive carotene, which comes from eating too many carrots or other foods rich in carotenoids, can cause this discoloration.

That vegetable is another plentiful source of carotene. I told him that he could correct this innocuous problem by changing his diet. The problem in his spine was harder to address. I suspected it was the result of severe osteoporosis and multiple compressed vertebrae; X-rays had confirmed it. Yet why would a man in his mid-fifties have such severe bone loss?

Building a sturdy skeleton begins with adequate nutrition and exercise during childhood and adolescence. As calcium accumulates in the bone matrix over time, the skeleton hardens. By the time people reach their midtwenties, their bones are as dense as they're ever going to be. Although osteoporosis is much more common among women as they age, men still account for 20 percent of the cases. But when men's bones grow brittle, the cause is often something other than age-related osteoporosis.

Twenty different conditions crossed my mind. My patient said he had no serious illnesses as a child, so I quickly ruled out many rare, congenital causes. What about steroid use? These drugs can hasten bone loss if they're taken for a prolonged period. But my patient denied using them. My suspicions then turned to hormone disorders that can affect bone metabolism, certain diseases of the bowel that disrupt the gut's ability to absorb calcium, and kidney disorders that can thin the bones. I therefore arranged for him to have blood and urine tests.

When the lab results came back, they were completely normal. I was perplexed. I flipped through the reports, wondering what I was missing. Gradually that question gave way to a new question: What was he missing?

After reviewing the test results with him, I asked, "What else do you like to eat besides brussels sprouts?"

"That's about it. Almonds, brussels sprouts, and water."

When I asked about meat, dairy, and fish, about other foods, he replied: "Oh, my system can't take that. They all give me cramps, and I just feel terrible." When asked how long he'd been living on just almonds, brussels sprouts, and water, he answered: "Oh, years. Many years."

There it was—a diet so deprived of calcium that his body had spent the last decade stealing the vital mineral from his skeleton and delivering it to the bloodstream to support critical functions throughout the body. He was now paying the price for his calcium deficiency with multiple vertebral compression fractures.

The severity of my patient's diet made me suspect that he was living with an eating disorder. When I suggested that he see a psychiatrist or other specialist, he said he felt no need to consult one. He politely turned down my prescription for a bone-strengthening drug, certain it would upset his stomach horribly. I explained that a simple increase in his calcium intake would halt the progressive dissolution of his bones and forestall any more fractures. He said he had no plans to change his lifestyle or eating habits.

After many years in practice, I was familiar with the feelings of frustration that may be evoked by patients who refuse to do what you believe is in their best interests. As a fledgling practitioner, I was often tempted to give in to those feelings, to try to coax or browbeat the patient into doing "the right thing." But a doctor does his patients no favor by pushing them away when they disagree with his recommendations. Ultimately, the patient must make choices and then live with the consequences. And the doctor must continue to provide care and support.

Year after year I continued to see the patient for his annual checkup. I was always glad to see him, even though whenever we discussed expanding his diet, he remained convinced that any change would "do him in."

So when he limped into my office that day with his weakened skeleton and told me about the terrible hip pain, I feared the worst. I sent him straightaway for X-rays. The results left me flabbergasted. The femur, or thighbone—the largest bone in the body—had lost so much calcium that it had fractured spontaneously, near the top, where it makes up part of the hip, while he was walking. He indeed had been limping around for a week on a broken hip. Apparently, this man of the cloth was also a man of steel.

He agreed to hip surgery, and it went without complication. Visiting him post-op one day I noticed that some of the food on his breakfast tray appeared to have been eaten. I turned to him with a wry smile. "Did you eat this?"

He sheepishly admitted that he had, adding that the food was "not bad." I encouraged him to keep it up.

hree months later, he came to see me after his physical rehabilitation. He didn't even need a cane as he stepped onto the scale. I pointed out that he'd gained six pounds since his last visit, when he'd hobbled in on a broken hip.

"Oh, yes. I've been eating more. There's a diner across the street from my church that sells wonderful cheeseburgers."

He was smiling. So was I.

H. Lee Kagan is an internist in Los Angeles. The cases described in Vital Signs are real, but the authors have changed the patients' names and other details to protect their privacy.

More From Discover
Health
Hugging Is an Evolutionary Tool for Survival
Health
The Other Magic Mushroom: Why a Canadian Startup Is Suddenly Interested in the Fungus From Super Mario
Health
How To Avoid Food-Borne Illness
Sponsored
Health
Leptitox Reviews - Is It Worth the Money? (Cheap or Legit?)
Health
What Are The Effects of Delta 8 THC? Here’s the Ultimate Guide
Health
Were Humans Born to Walk Barefoot?
Recommendations From Our Store
My Science ShopCosmos: Possible Worlds
My Science ShopStrange Science
My Science ShopEinstein's Universe
My Science ShopElements Flashcards
Shop Now
Stay Curious
Join
Our List