A sore hip launches a patient on an odyssey through the world of medical care before giving way to a surprisingly simple conclusion. 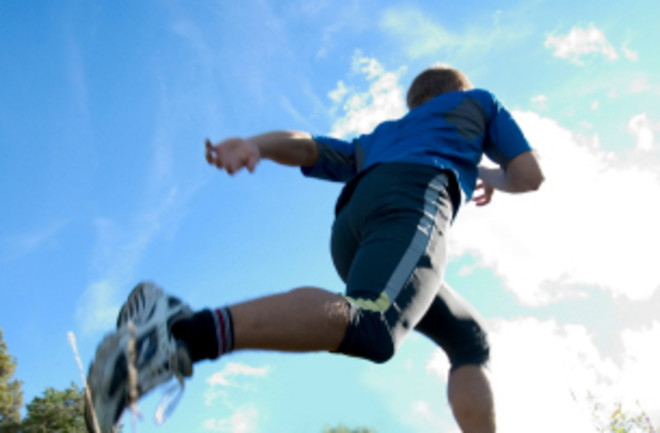 Forty-two-year-old Russell McCoy was energized and sweaty as he finished a three-mile run around his neighborhood. He headed straight for his refrigerator and cracked open a diet soda, downing it in a couple of swigs. Holding the empty can, he backed toward the garbage pail, pivoted, shot, and scored. Then pain, sudden and excruciating, lanced through his left hip. He bent over, aware that he had twisted something the wrong way. Breathing deeply, he felt a little better. A few hours later, though, he tried to run a few strides and almost yelped from the pain. For the next two weeks, he took it easy. But the hip didn’t get better.

I first saw Mr. McCoy in June, two months after the soda-can episode. He had already been to another doctor, who was convinced this was “referred pain”—in other words, pain in one body area that is actually the result of a problem in another. According to that doctor, Mr. McCoy had strained his lower back muscles and was experiencing it as hip pain. A week of an anti-inflammatory medicine and stretching exercises for the lower back had not helped, however. An X-ray of the hip a month later showed no sign of arthritis or fracture, and an MRI of the lower back hadn’t revealed much either, just a small disk bulge that seemed unrelated to the pain.

Over the two months since the injury, my patient told me, he had gained 10 pounds. He wasn’t exercising because it hurt too much. He wasn’t sleeping well, either; the hip ached when he lay on his left side. He sucked his breath in sharply when I pushed on the greater trochanter, the bony outer part of his upper left thigh.

His main symptom—the sore spot on his hip that hurt when pressed—was typical for trochanteric bursitis, inflammation of the greater trochanter’s bursa. A bursa is a fluid-filled sac that allows adjacent tissues to glide over each other. When injury or overuse irritates the bursa, any pressure or movement around it will cause pain. I recommended treating the inflammation with a cortisone injection.

My patient cringed at the thought of a needle poking into the painful area. Instead, he decided to seek yet another opinion, this time from an orthopedic surgeon. Like the first doctor, the surgeon believed the symptoms originated in the lower back. He had Mr. McCoy see a physical therapist, who thought the back had nothing to do with it and that he had strained a muscle in his hip. The next stop was a chiropractor, who worked on both hip and back with no improvement.

Finally, four months after our first visit, Mr. McCoy was back in my waiting room. His belly now bulged over his belt, and he grimaced each time his left foot hit the floor. “I’m ready for the injection,” he said. “Let’s go for it.”

I had him lie on his right side, located the most tender area on the top of his left thigh, and injected a mixture of anesthetic and cortisone. Injections like these are among the few procedures that can give almost instant relief. The anesthetic numbs the sore area immediately, and the steroid kicks in within two days. If the anesthetic helped, it would support my diagnosis, and we could be pretty sure that the steroid would work. If the anesthetic didn’t help, then it probably wasn’t trochanteric bursitis after all.

I held my breath as he took a few steps. He winced. The injection had not worked.

It had been six months since Mr. McCoy first hurt his hip, and now we were right back where we started. I had run out of ideas. The physical exam, the X-ray results, and the injection had ruled out the common causes of hip pain—arthritis, bursitis, fracture, referred pain from the lower back—but he still couldn’t run. In many situations, the search for a cause of pain ends without an answer, and we change our focus to pain control. But I was not ready to give up.

Apologizing for adding yet another doctor into the mix, I suggested a rheumatologist—a joint specialist—who then sent Mr. McCoy for a procedure in which an anesthetic, followed by cortisone, was injected directly into the ball-and-socket part of the hip joint. This, too, failed to relieve the pain.

We had not yet addressed the slight disk bulge that appeared on the MRI of Mr. McCoy’s lower back. I didn’t think it was the culprit, but we had no other leads. Disk bulges are notoriously tricky to interpret because they are common in people both with and without pain; in fact, they appear on MRIs of people without back pain roughly 50 percent of the time. So it isn’t easy to decide whether a bulge justifies the discomfort, expense, and radiation exposure of additional tests, or even surgery.

Mr. McCoy’s neurosurgery appointment wouldn’t happen for another two months. While he waited, I suggested he return to the physical therapist for a cane and some hip exercises.

When I saw him a month later, in January, I had to blink a couple of times. He wasn’t limping. He wasn’t using a cane. He was smiling.

What he told me was so utterly unexpected, so simple, that I was at a loss for words. “I have a short leg,” he explained. “The physical therapist measured my legs, and my right one is about half an inch shorter. He gave me a heel lift and it’s working like a charm.”

I had not learned about leg length discrepancy (LLD) in my training, and it seemed that none of the other clinicians Mr. McCoy saw had considered it either. But leg length discrepancies are common. According to some studies, up to 70 percent of people have a slight difference in the length of their legs; one person in a thousand has a difference of nearly an inch. In most cases, the difference goes undetected.

There are two kinds of LLD. Structural discrepancies, which can be congenital or the result of a fracture or hip replacement surgery, involve an actual difference in the length of the bones. Functional discrepancies, on the other hand, are caused by muscle weakness or stiffness in the pelvis, ankle, or foot—the legs are the same size but function as if one is longer. Mr. McCoy probably had a lifelong mild leg length discrepancy that never bothered him until he hurt his hip. The pain changed the way he walked, and all of a sudden the discrepancy mattered.

My patient’s LLD was small enough that it had never caused an obvious limp, at least until now. But there was another clue that nobody had noticed. “I looked at the soles of his shoes, and one was more worn,” the physical therapist told me. “If the right leg is shorter, you tend to walk on the outer part of that foot, to extend the leg. On the other side, to make the longer leg feel shorter, you flatten out that foot. You can learn a lot from the soles.”

One common method used to check for a structural leg length discrepancy involves running a tape measure from a point on the pelvis to the ankle bone several times and then averaging the numbers. To check for a functional discrepancy, a physical therapist will measure from the belly button to each ankle bone. Some doctors recommend taking a special X-ray to verify the measurement; others believe that the degree of accuracy achieved with an X-ray is not worth the radiation exposure and is not necessary with small discrepancies.

Physical therapists often give a patient with hip pain and a small LLD a heel lift or even an insert from a sneaker to try for a week or so. What makes the treatment tricky is that a heel lift doesn’t always work. As with those incidental disk bulges on MRIs, a leg length discrepancy may have nothing to do with the pain; since a slight difference in leg lengths is so common, it would be easy to make the mistake of treating the pain with a heel lift when there is another reason for it, like arthritis or bursitis. And some people have had an LLD for so long that they’ve compensated by holding their pelvis at a certain angle. In those situations, a heel lift that is used for more than a week may end up causing pain rather than relieving it.

For some people, the search for relief from hip pain never ends. Luckily, that wasn’t the case with my patient. The heel lift did more than match the length of his legs. It lifted his spirits.

Anna Reisman is an internist in West Haven, Connecticut. The cases described in Vital Signs are real, but names and certain details have been changed.