A boy is rushed to the ER after falling and  rupturing his kidney. With no pediatric surgeon  on staff, his doctor faces a difficult decision. 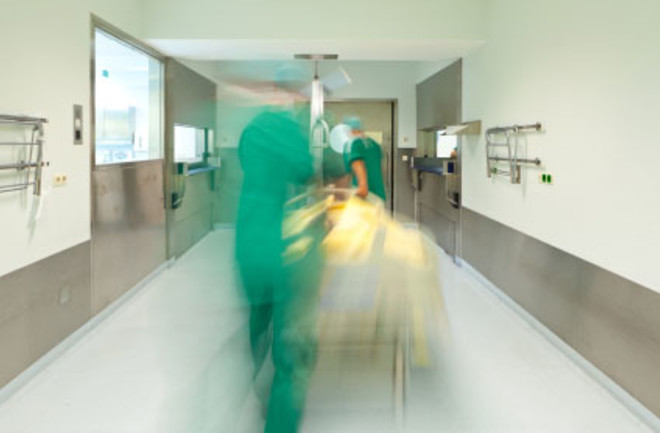 He burst into my emergency room and hurried toward me: a tall, square-shouldered man with his young son squeezed tightly to his chest. “This way,” I said. “You’re OK, pal; you’re OK.” The child looked about 6 and appeared unhurt.

“We don’t know what happened,” the father began as he eased his boy onto a stretcher. “He and his friends were playing on the sidewalk. It was getting dark. They said he fell through a metal basement-delivery door in front of a store.”

“Did he hit his head?” I asked. “Any loss of consciousness?”

The father seemed unsure, so I turned to the boy. “Did you slip, buddy? Do you remember what happened?”

“Did you hit your head? Your belly?” His eyes were fixed on his father. He said nothing. The nurses undressed him. His vital signs were excellent: blood pressure a robust 120/86, heart rate a tad high at 106.

“Tell me if anything hurts, OK?” The boy seemed dazed, wondering whether he was hurt, in big trouble, or both. He was thin and bony, his skin almost translucent—there seemed no place for an internal injury to hide. While listening to his lungs, I noted a scrape on the boy’s rib cage, but that was it. He vaguely pointed to his left abdomen, but when I pressed there, no response.

The mother arrived. Wide-eyed but silent, she kissed him on the head. “So nothing hurts, right, pal?” I asked again. Was this a simple case of the wind getting knocked out of him? The boy stared mutely at his parents. He was lying too still.

The scrape was over the lower left rib cage, where the spleen lies. Children’s ribs bend more than adults’ ribs do; they tend to transmit, not absorb, a blow. I needed a look inside. I wheeled an ultrasound machine over and placed the probe over the boy’s left flank. A bright arc floated onto the screen—the diaphragm. I angled lower, and the spleen, gray and oval, emerged into view. Carefully scanning its contour, I saw no pools of black, the signature of leaking blood. All was well. Last landmark: the kidney.

Here, a maelstrom of black and gray filled the screen. What the—? I almost sputtered. Scanning quickly, I hunted for the kidney’s contour. Nothing. On the right flank, though, its counterpart popped right up. “I’m not sure,” I hedged to the mom and dad, “but there may be a problem with the kidney. We need a CAT scan.”

Their breath drew in.

The overhead monitor showed a steady blood pressure, but in bleeding children blood pressure does not drop gradually the way that of adults does. Their vascular systems constrict furiously to keep blood pressure up—until, suddenly, nothing.

A nurse and I hooked the boy to a portable monitor and quickly wheeled him to the emergency room’s CAT scanner. “I know it’s a little scary,” I told him as we laid him on the scanner gurney, “but we’re going to make you better, OK?” He nodded. Still a man of few words.

The scanner hummed. I huddled next to the technician to see the monitor as the first images came up.

“Jesus,” I muttered. The ultrasound had not lied. A huge, dark mass of blood—a hematoma—stretched from diaphragm to pelvis and appeared to represent half the boy’s total blood volume. A fragment of kidney materialized, its ragged edge showing where the organ had split.

“Fractured upper kidney,” the radiologist called. “Huge hematoma. Looks like he’s still bleeding.” A pulse of fear shot through me.

The management of solid-organ trauma has evolved over the past 20 years. The old attitude was, “when in doubt, cut it out.” Since then, trauma studies have shown it is often safe to wait and trust in the body’s clotting ability; clotting can preserve the organ and avoid the complications that might result from an operation. But this kidney looked like a goner, and the bleeding wasn’t stopping. A nephrectomy, the complete removal of the kidney, might be necessary to stop the massive blood loss.

My immediate problem: We had no pediatric surgeon.

The Berger commission—a new York State initiative to cut excess hospital capacity—had recently shut my hospital’s pediatric floor, which meant we no longer performed surgery on children. Any child requiring hospitalization is now stabilized by our pediatricians and transferred uptown to New York Presbyterian Hospital. City ambulances automatically take injured children to trauma centers, but my patient had been carried in by his dad. Had he been in critical condition, our adult trauma surgeons would have pounced. However, the normal blood pressure meant we theoretically had time to transfer him to a pediatric surgeon. But I had never seen an abdominal hematoma that huge. Would the blood pressure hold?

I bolted out of the control room. “We need to get him uptown now.” The mom overheard me and sagged against a wall. Kicking myself, I grabbed the nearest phone, turned to my nurse, Pilar, and said, “Tell blood bank we need two units O negative right now.” We didn’t have time to crossmatch his blood type. If his vital signs budged, type O negative blood—the universal donor—would have to go in.

The transfer center came on the line. “Our pediatric transport team is in the Bronx,” they said. “How long till they’re free?” I asked.

Our hospital has its own ambulance, but it operates under New York City’s 911 system. To pull an ambulance for a transfer, you’re supposed to call the 911 dispatcher, then wait for the request to go through channels. I punched the phone again. “Tony?” I said.

“What can I do for you, Dr. D.?” Tony Suarez is our ambulance director. All he had to hear was, “Six-year-old. Shattered kidney. Needed to be uptown 10 minutes ago.” “You got it,” he said.

The hospital has a separate ambulance crew that transfers patients during the day. It was after hours, but Tony called the crew and got them right in. Pilar came down with two units of blood. Richie and Norman, two seasoned paramedics, rolled in a gurney: “Where we going, Dr. Dajer?”

“Uptown.” I introduced them to my patient. “Bravest kid in the city.” Mom and Dad clutched a hand each. The boy stared like he was sizing up a roller-coaster drop.

“Don’t worry about vital signs and IVs,” I told the medics. “Pilar’s on it, and she’s coming with. Let’s go.” I was not letting this kid out of my sight. If his pressure dropped en route, it would be up to me to pump the blood in and resuscitate him.

A unit of O negative blood in one hand, I took the head seat. Boy and stretcher followed. Richie came next and set up his blood pressure monitor. Pilar held the blood transfusion tubing; Mom and Dad piled in. “Go, Norman,” I shouted.

The ambulance jounced out of the driveway. Thirty seconds later, I asked Richie, “Blood pressure?”

Cradling his head, I asked the boy, “How we doing, buddy?”

“OK,” came the soft reply. My hands stayed on his head. As we sped up FDR Drive, the lights of the city seemed very far away.

Then came some turns, bounces, and an ambulance bay. A half-dozen doctors and nurses swarmed. “Last blood pressure, Richie?” I asked. He flashed a thumbs-up. “120/78.”

Dad shook my hand hard; the color returned to Mom’s face. Smoothing the boy’s hair one last time, I declared, “You can ride with me anytime, big guy.”

A week later, the head pediatrician called. “We almost took him to the OR. Lost half his blood volume, but we kept up with blood transfusions and the kidney stopped bleeding on its own. The amazing thing is, the kidney still works.” “Wow,” I said.

“Yeah. Six years old is sometimes a very good thing to be.”

Tony Dajer is chairman of the department of emergency medicine at New York Downtown Hospital in Manhattan. The cases described in Vital Signs are real but names and certain details have been changed.