An embryo that lands short of the womb can cause fatal complications. 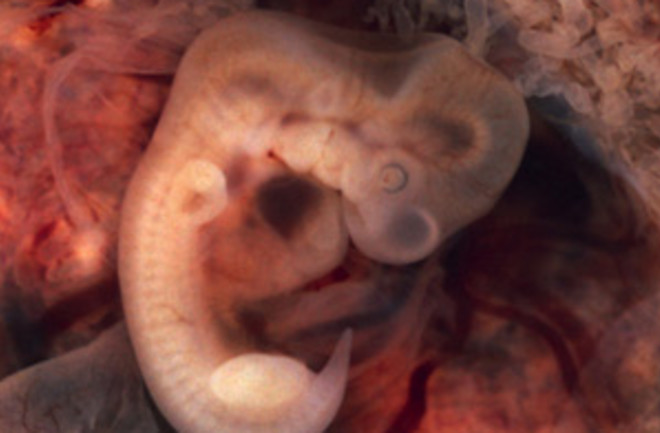 (Click on image to enlarge) | Ectopic pregnancy: an embryo less than half an inch long implanted in an oviduct.

Janetha Richards was terribly excited to be pregnant, but that wasn’t the reason she fainted.

She loved kids so much that she had signed on as a teacher’s aide a their local kindergarten, and she had always wanted her own. She had been trying to conceive for six years, but until seven weeks ago, she had gotten nothing from her efforts except a chlamydial infection from a cheating boyfriend. She had been thrilled to see the pink stripe on the home pregnancy test kit. But she was deliberate and more than a little superstitious, so she had waited to call for an obstetrician’s appointment for fear she would miscarry. After all, she’d had an episode of spotting a month after missing her period, and she’d had worsening cramps over the last three weeks. Then, too, she was 32, older than most of the first-time mothers in her neighborhood in south Chicago.

Janetha still hadn’t called her doctor that afternoon when she felt a ripping pain in her pelvis. She had struggled to keep smiling for the children, but she was frightened that she was losing her baby. She kept a smile on her face right up to the moment she lost consciousness.

When her ambulance pulled up to the emergency department doors at Cook County Hospital, it was clear even to the medical students that Janetha was in serious trouble. She was barely conscious, despite the intravenous fluids the paramedics had poured into her on the ride from school. Her smooth dark skin was ashy gray. Her pulse was racing. The nurse couldn’t find a blood pressure reading with the automatic cuff, and when she checked with her stethoscope, it was only 70/40. Janetha was in shock.

She hadn’t told anyone she was pregnant, so it took a while for the emergency room doctors to figure out why she was dying, but only a limited number of conditions cause shock in an otherwise healthy woman. After infections are ruled out, pregnancy complications lead the list. A urine pregnancy test, drawn with the help of a bladder catheter, confirmed that diagnosis, and I was called down with the gynecologic surgery team.

Our initial examination confirmed that Janetha was in grave condition. I could tell from the way her belly felt that it was distended from blood, not from the pregnancy. Every time someone touched her abdomen, she winced, a reaction to the blood irritating herperitoneal lining. When the emergency department staff ran blood into her veins, she would come to, only to fade away again every time the transfusions stopped for another bag to be hung. All the signs added up to a ruptured ectopic pregnancy.

Pregnancies are ectopic when the fertilized egg implants outside the lining of the womb, usually in the fallopian tube. The surface of the tube is normally velvety, lined by fronds that sweep the egg toward the uterus and ascending sperm. Other cells nourish the egg and provide compounds that help it mature. But endometriosis or infections like chlamydia or gonorrhea can cause some of the fronds to scar together,forming pouches that trap the egg. If fertilized, the egg grows in place, supporting itself via placental tissues that eat into the wall of the tube and by releasing chemicals that stimulate the formation of new blood vessels. Unlike the uterus, the tubal wall is inelastic. As the embryo grows, the wall stretches until it ruptures, usually after 6 to 10 weeks. Dilated blood vessels break, pouring blood into the abdomen. Without treatment, women often die.

A close-up of an oviduct seen through a microscope. | (Courtesy of Jagiellonian University Medical College)

Ordinarily, ectopic pregnancies are diagnosed when a pregnant woman has spotting or pain. An ultrasound scan will show an empty uterus, sometimes fluid in the pelvis from leaking blood, sometimes a mass in one tube where the pregnancy has implanted. When the ultrasound scan isn’t clear, levels of pregnancy hormones are checked for clues. Because ectopic pregnancies occur in tissue that isn’t made to feed an embryo, growth is slow, and hormone levels fail to rise normally,usually allowing diagnosis within the first eight weeks. In these cases, the pregnancy is terminated noninvasively with methotrexate, a chemotherapy drug highly toxic to growing fetal tissues; the procedure usually doesn’t preclude conceiving again. In equivocal cases, laparoscopy—a procedure in which a tiny camera and tools are inserted into the patient—can be used both to diagnose the site of the pregnancy and to treat it. A surgeon would then open the fallopian tube to aspirate the pregnancy-related tissue and seal the blood vessels with heat to control the bleeding.

Janetha’s ectopic pregnancy was neither early nor equivocal—but it was a Friday evening, and when we called the operating suite to get a room, all the teams were busy with trauma cases. To illustrate the urgency of the case, we did a culdocentesis, passing a needle through the thin layer of vaginal muscle behind the cervix where blood pools when ectopic pregnancies bleed. The syringe filled with blood. That persuaded the surgical nurses to free an operating room for us.

When we opened Janetha’s abdomen, at first we saw nothing but clots.We took out three quarts of blood, more than half her blood volume.With that cleared away, we pulled her uterus into the surgical field and saw the problem. Most ectopic pregnancies implant in the thin wallof the fallopian tube between the ovary and the uterus. In Janetha’s case, the egg had almost reached the interior of the uterus but had implanted within the muscular wall of the uterus itself. The muscle there was ragged, blown open by the pressure of the growing embryo, and the uterine artery was bleeding.

The surgical solution was straightforward. We cut out the torn muscle and the bits of embryonic tissue and placenta, then sewed the right corner of the uterus back together. The stitches pinched the artery shut, and the bleeding stopped. Unfortunately, the surgical stitches also abolished the connection between the end of the fallopian tube and the uterine cavity, just as a tubal ligation would. In someone else, conception would have remained possible via the left fallopian tube. Not for Janetha. The open end of a fallopian tube is usually soft and spongy to collect eggs after ovulation, but Janetha’s left fallopian tube was scarred shut, probably because of inflammation from a chlamydial infection.

Janetha would never be able to conceive without in vitro fertilization techniques, which public insurance rarely covers. Butwithin two months she was back at kindergarten, caring for her kids.

Stewart Massad is chief of the gynecologic oncology division at the Southern Illinois University School of Medicine in Springfield. The cases in Vital Signs are true, but names and other details have been changed.