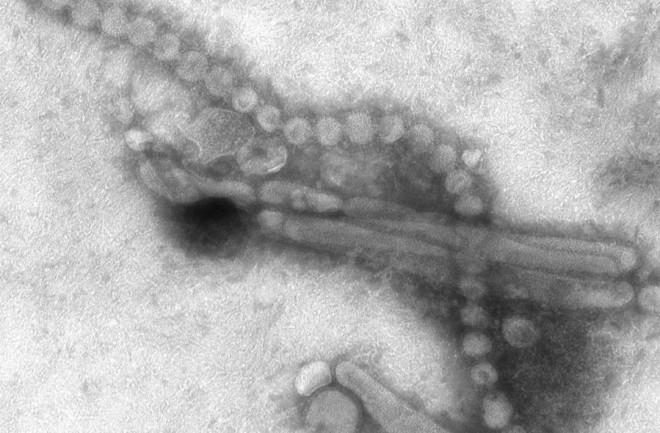 Influenza H7N9 as viewed through an electron microscope. Credit: CDC The devil is in the details when it comes to predicting the next viral killer. As a candidate for the next virus most likely to cause a pandemic, influenza virus H7N9 has gotten attention. Earlier this year, the previously unknown avian virus emerged from the poultry markets of eastern China to infect more than 130 people, killing at least 39. Now researchers report that a DNA sequence H7N9 has appropriated from another virus, among other factors, make it particularly worrisome. To understand how H7N9 might evolve into a pandemic-ready pathogen, the scientists summarized unusual characteristics of the virus, as well as the entire H7 family, in a review published today in mBio, the online, open-access journal of the American Society for Microbiology.

The eight genes of the H7N9 virus are closely related to other avian influenza viruses. As the diagram shows, the virus likely obtained its HA (hemagglutinin) gene from domestic ducks, its NA (neuraminidase) gene from wild birds, and its six remaining genes from multiple related H9N2 influenza viruses in domestic poultry. Credit: CDC Chief among concerns raised in the review is that H7N9 contains an internal gene cassette — essentially a piece of DNA — from the avian virus H9N2. One virus having a piece of DNA from another is not unusual: wild birds, the natural hosts of avian viruses, often are infected with multiple strains, which frequently results in gene-shuffling amongst them. H7N9's filching from H9N2 is of concern because the H9 virus family has caused widespread human infection in the past and can move rapidly between avian and mammalian hosts. If H7N9 were to adapt to have these characteristics it would significantly increase the risk of pandemic. H7N9, like some other H7 viruses, also shows a tendency to infect human conjunctival cells lining the white of the eye and inside of the eyelids. This infection route results in early symptoms like conjunctivitis more frequently than the respiratory symptoms typically associated with influenza, which could cause health practitioners to miss the earliest signs of an outbreak. Conjunctivitis sufferers also often wipe or rub their eyes, which could heighten risk of person-to-person transmission.

Researchers also point to a long history of viruses in the H7 family causing large outbreaks in poultry populations that sometimes spread to humans, such as in the Netherlands in 2003, when roughly 450 people were infected with H7N7. The H7 family, including H7N9, poses particular concerns because it has demonstrated an ability to infect numerous mammals. Researchers found a strain of H7N7 that adapted to live stably in horses for decades before apparently dying out in the 1970s, and pigs have been infected experimentally with H7N9 to determine its transmissibility. Today's review noted that H7N9's ability to infect pigs, shown in previous research, is a particularly important finding because the animals are widely considered to be optimal “mixing vessels” for virus mutation and gene-shuffling between strains. Today's report sums up many of the reasons public health officials are watching H7N9 with concern, but other studies have shown the virus may be less of a threat: A study published earlier this month in Nature, for example, noted that the virus appears to replicate more easily in the lungs than in the trachea. While that’s of little comfort to someone already infected, the reduced tracheal viral load could make human-to-human transmission — and the risk of pandemic — less likely.