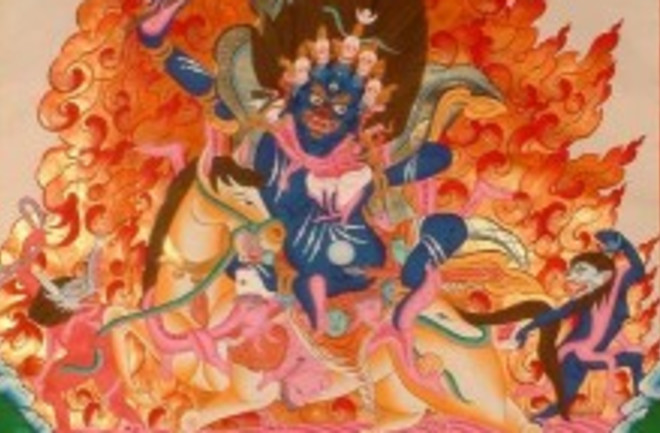 Nick Wade in The New York Times is reporting on a new paper which will come out in Science tomorrow which investigates the evolution of genes implicated in adaption to higher altitudes among Tibets. I've posted on the genetics of this topic before, it obviously is of great interest. The major new finding is that these adaptations seem to have spread among Tibetans very recently, on the order of 3,000 years or so. Here's the relevant section on the genetic architecture:

The Beijing team analyzed the 3 percent of the human genome in which known genes lie in 50 Tibetans from two villages at an altitude of 14,000 feet and in 40 Han Chinese from Beijing, which is 160 feet above sea level. Many genes exist in a population in alternative versions. The scientists found some 30 genes in which a version rare among the Han had become common among the Tibetans. The most striking instance was a version of a gene possessed by 9 percent of Han but 87 percent of Tibetans. Such an enormous difference indicates that the version typical among Tibetans is being strongly favored by natural selection. In other words, its owners are evidently leaving more children than those with different versions of the gene. The gene in question is known as hypoxia-inducible factor 2-alpha, or HIF-2a, and the Tibetans with the favored version have fewer red blood cells and hence less hemoglobin in their blood.

But the more confused issue is the accuracy of the time timing:

The three new reports agree in finding the Tibetans’ version of the gene has been favored by natural selection. But the Beijing Genome Institute’s calculation that the Tibetan and Han populations split apart only 3,000 years ago is less likely to be accepted. Archaeologists believe the Tibetan plateau has been inhabited for at least 7,000 years and maybe for as long as 21,000 years. “The separation of Tibetans and Hans at 3,000 years ago is simply not tenable by anything we know from the historical, archaeological or linguistic record,” said Mark Aldenderfer, a Tibetan expert at the University of California, Merced. Dr. Aldenderfer said that there had probably been many migrations onto the Tibetan plateau, and that there was indirect evidence that pastoralists had entered the plateau from the north-northeast around 6,000 years ago. Earlier genetic studies have found that Tibetans are more similar to northern Han than to those from southern China, and have some admixtuWell, re of genes from Central Asia, he said. Geneticists have a more elastic view of dates than do archaeologists, and the estimate of a Han-Tibetan population split at 3,000 years ago could probably have been adjusted to 6,000 or later if the geneticists had taken any account of any other kind of evidence. Rasmus Nielsen, a Danish researcher currently at the University of California at Berkeley, did the statistical calculations for the Beijing study. “We feel fairly confident that something on the order of 3,000 years is correct,” he said. But in a later e-mail message he explained that “I cannot with confidence rule out that the divergence time is 6,000 instead of 3,000.”

I haven't seen the paper, but I assume that the 3,000 years figure was derived from the point at which selective sweeps started diverging the genetic architecture of adaptations related to altitude phenotypes. But there is probably a pretty large confidence interval here, and previous estimates have been revised upward (though Nielsen is one of the best in the game, and he sounds relatively confident). I don't see why the length of human habitation is that relevant, populations move, or are replaced. Archaeologists simply have a very strong bias against population movements, and tend to see cultural continuity in their interpretation of physical remains. Very similar things were asserted by archaeologists when the first genetic evidence on the exogenous origin of the Etruscans came to light. I assume there are many scholarly careers which have been based on fleshing out the cultural continuities of societies and cultures on the Tibetan plateau, and the idea that contemporary Tibetans are newcomers would overturn that. More to say tomorrow when the paper comes out. But ScienceDaily has some more details:

The widespread mutation in Tibetans is near a gene called EPAS1, a so-called "super athlete gene" identified several years ago and named because some variants of the gene are associated with improved athletic performance, Nielsen said. The gene codes for a protein involved in sensing oxygen levels and perhaps balancing aerobic and anaerobic metabolism. ... "We can't distinguish intermixing and replacement," Nielsen said. "The Han Chinese and Tibetans are as different from one another as if the Han completely replaced the Tibetans about 3,000 years ago." The Tibetan and Han Chinese genomes are essentially identical in terms of the frequency of polymorphisms in the roughly 20,000 genes, though some 30 genes stood out because of dramatic differences between the Tibetans and the Han. "We made a list of the genes that changed the most," Nielsen said, "and what was fascinating was that, bing!, at the top of that list was a gene that had changed very strongly, and it was related to the response to oxygen." The SNP with the most dramatic change in frequency, from 9 percent in Han Chinese to 87 percent in Tibetans, was associated with lower red blood cell count and lower hemoglobin levels in Tibetans. That variation occurred near a gene called EPAS1, which earlier studies suggest is involved in regulating hemoglobin in the blood as a response to oxygen levels. The mutation may be in a transcription factor that regulates the activity of EPAS1. Tibetans carrying only one allele with this mutation had about the same hemoglobin concentration as Han Chinese, but those with two mutated alleles had significantly lower hemoglobin concentration. However, they all have about the same oxygen concentration in the blood. For some reason, individuals with two copies of the mutation function well in high altitude with relatively low hemoglobin concentration in their blood. The mutation seems to provide an alternative inborn mechanism for dealing with the low oxygen levels, Nielsen said.

I'm intrigued that this seems to express recessively in terms of the trait-value they looked at. I wonder if there are other fitness benefits in the heterozygote state which allowed it to increase in frequency rapidly so that the benefits in the homozygote state could express. Image Credit: Wikimedia