In response to the Etruscan story comments like this keep popping up:

The articles in the press keep mentioning the Etruscans coming from Lydia. Lydian was an indo-european language. So, although there may be a linguistic link to Lemnos and a genetic link to Western Asia, there is no obvious link to Lydia and the classical accounts of the origins of the Etruscans. 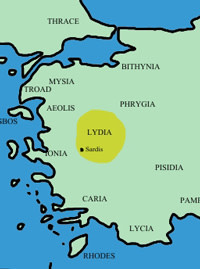 On my other blog I placed "Lydia" in quotation marks because saying that the Etruscans were Lydian is about as accurate as saying that the Wyandot (Huron) tribes who resided north of lake Superior in 1500 were "Canadian." To the left the core cultural area of the Lydian kingdom, which eventually expanded to cover most of western Anatolia, is highlighted. Herodotus, from whom we receive the legend of the Anatolian origin of the Etruscans, introduced the Lydian angle. It is important to remember that Herodotus lived about a century after the height of the Lydian empire (which was conquered by the Persians). For the Greeks of this period Anatolia as they knew it (the western regions inland from the coastal Greek cities of Ionia) was Lydia. In other words, the "Lydian" origins of the Etruscans is an anachronism today, and, it was an anachronism in the time of Herodotus. Western Anatolia during the period between 1000 BCE and 500 BCE was likely a prison house of languages and ethnicities, as much of the ancient world was. Many groups are known only through garbled recollections of a neighboring people or a few spare records. The Indo-Aryan origin of the Mitanni of Syria was established by analysis of some archaic lexical elements specialized manuals on horsemanship as well as the deities appealed to within a treaty. If not for the chance preservation of these documents we might have no extant evidence as to the presence of speakers of Indo-Aryan dialects in west Asia. I find the objection that Lydian was an Indo-European language absolutely unpersuasive because the languages we know about are those for whom we have written records. Consider this from Wikipedia:

The Etruscans had a rich literature, as noted by Latin authors. Unfortunately only one book (now unreadable) has survived, although there is always some possibility that more will turn up. By AD 100, Etruscan had been replaced by Latin.

Imagine trying to reconstruct the pattern of languages in Nigeria purely from a small fraction of government & business records! Though India has a nearly 20 "official" languages, there are over 1,000 attested languages within the country, and several with over 1 million speakers with no written tradition. The ancient world was likely no different, writing introduces stasis and homogenization to the speech pattern of ruling elites, but populations just making the transition from pre-literate to literate will exhibit the enormous variety and diversity which is characteristic of oral traditions. Additionally, prior to the introduction of an alphabet literacy was restricted mostly to a scribal class. Most of the population still lived purely within the oral domain. Within the ancient Hittite empire, which predates the Lydians in Anatolia by about 1,000 years, we know that the ruling elite spoke an Indo-European language, and termed themselves the Nesili. But, we also know that the heart of the empire (central Anatolia) was dominated by speakers of the Hatti dialects, a non-Indo-European language which influenced the Hittite tongue. To the west there were various Greek dialects, Luwian, and other languages. To the east the kingdom of Urartu was dominated by non-Indo-European speakers, but at some point around 500 Armenian emerged as the dominant language in this region. The point is that there is a lot of history hidden from view during the period when the Etruscans left Anatolia. They were established in the Italian peninsula by 800 BCE, but likely were not present before 1200 BCE. This suggest their emigration was during the chaos following the collapse of the Hittie empire and the rise of Phyrgia (the western Anatolian kingdom which preceded Lydia as the preeminent power). This whole period is shadowy, so we have to focus on the variables we know and have and allow that others may always be free ranging parameters. Which brings me back to the genetic data. I believe it is pretty strong at this point because we have multiple pieces of evidence converging to the same inference. Not only does it establish a genetic connection between Tuscans and Turks of remarkable closeness which would seem ludicrous a priori, some of the data also implies that the lineages of the Tuscans are derived from that of Anatolia (e.g., the Tuscan lineages expand from a subset of Anatolian ones). We may simply never be able to fix upon the cultural forebears of the Etruscans within Anatolia because history gives us only the thinnest slice of the full picture. Bu the migration of these people is already a rather peculiar event, so it would be unexpected to me if it was embarked upon by an obscure and marginal tribe away from the limelight of history. Note: Note that I specified cultural forebears. The ancestry of the modern Turkish population is likely ancient and deep, and Tuscan data implies that it goes back at least 3,000 years. This is the common pattern in much of the world. Cultural change after the transition to agriculture being induced by diffusion (e.g., the spread of Aramaic) or the absorption and superseding of local elites by outsiders (e.g., the spread of Arabic from above after the Islamic conquests). Because the Turks were originally a Mongolian people a non-trivial genetic component from this source can be detected within the Anatolian population, on the order of 5-20% depending on the study, but most of the ancestry is "pre-Turk."