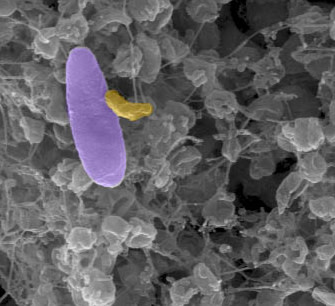 What's the news: If bacteria had blood, the predatory microbe Micavibrio aeruginosavorus would essentially be a vampire: it subsists by hunting down other bugs, attaching to them, and sucking their life out. For the first time, researchers have sequenced the genome

of this strange microorganism, which was first identified decades ago in sewage water. The sequence will help better understand the unique bacterium, which has potential to be used as a "living antibiotic" due to its ability to attack drug-resistant biofilms and its apparent fondness for dining on pathogens. Anatomy of a Vampire:

Clues From the Vampire Code: