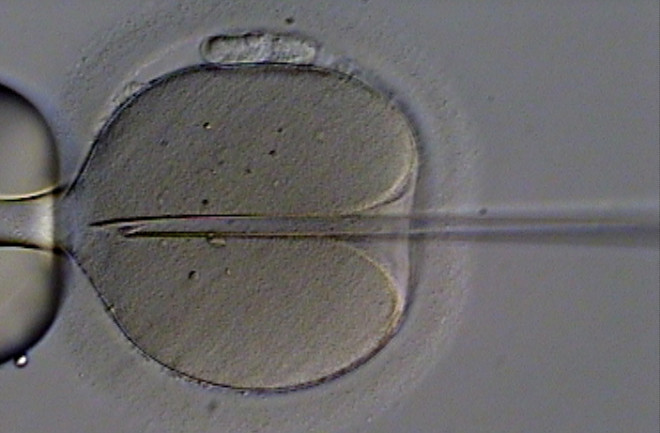 Sperm injection into a human oocyte, or immature egg cell. (Credit: Eugene Ermolovich (CRMI)/Wikimedia) Regulators in the United Kingdom on Monday approved a request from scientists to use the emerging CRISPR gene editing tool to perform experiments on human embryos. Researchers from the Francis Crick Institute in London filed a license application in September 2015 with Britain's Human Fertilisation and Embryology Authority to perform gene editing experiments to better understand the genes that help humans develop in their earliest stages of growth. Their request was granted, which marks the first time scientists have received official permission to alter human embryos.

The researchers plan to study embryos in the first week of growth, when they are comprised of between 64 and 256 cells. According to Kathy Niakan, a lead researcher at London's Francis Crick Institute, the experiments aim to better understand the initial stages of human development in order to prevent miscarriages and infertility. The team will focus on roughly 20 genes that guide the process of separating cells soon after fertilization. “The only way we can understand really human biology at this early stage is by further studying human embryos directly,” Niakan said during a press conference Monday, according to STAT News. The team will use the CRISPR gene editing tool to selectively “turn off” genes of interest and then study the results of their modifications. Niakan wants to first focus on a gene called OCT4, which is responsible for ensuring that stem cells look like their parents after they divide. The embryos used for these experiments will be disposed of after a week, the researchers say, and none will be used to start pregnancies. Embryos will come from willing donors at in-vitro fertilization (IVF) clinics, according to the Crick Institute. “I promise you she has no intention of the embryos ever being put back into a woman for development,” Robin Lovell-Badge, head of the Crick Institute's Division of Stem Cell Biology and Developmental Genetics, told TIME.

Just under one year ago, Chinese researchers were the first to genetically alter "non-viable" human embryos in the lab. Scientists at Sun Yat-sen University used CRISPR in an attempt to cure a blood disease called beta thalassemia. Their experiment yielded limited success, and researchers inadvertently caused many off-target effects — they disturbed genes they hadn’t intended to touch. Their research revealed serious obstacles that still stand in the way of using CRISPR for medical purposes in human embryos. The Chinese researcher team did not receive official approval from the government to conduct their experiment. However, Monday’s decision in the U.K. marks the first time a country has formally allowed human gene editing. Most gene editing research up to this point has been performed on animals. The United States government does not expressly forbid experiments on human DNA, but the National Institutes of Health refuses to fund any human germline research. Researchers wishing to pursue such research in the U.S. must obtain private funding.

Britain last year passed a landmark decision to allow so-called three-person IVF, which is a different procedure involving embryos. This process offers a cure for deadly mitochondrial diseases by combining the nucleus of a diseased egg with the healthy mitochondria of a second egg. By swapping mitochondrial DNA, three-person IVF represents a less-direct form of modifying the genetic makeup of an embryo. Monday’s decision, on the other hand, opens to door to directly altering the human germline, a technique which offers a powerful solution to many genetically inherited diseases, but could also be used to create so-called “designer babies.”