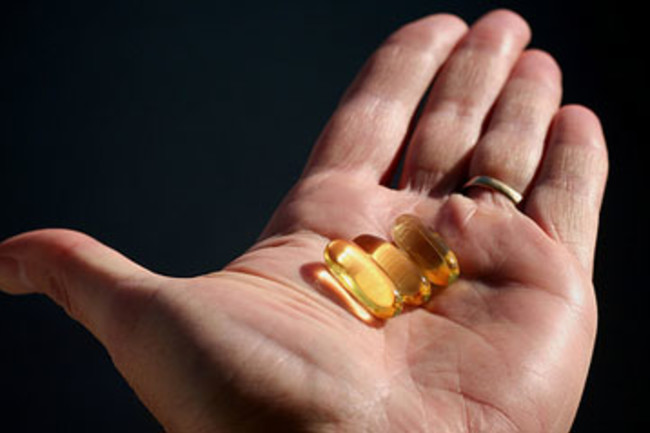 Two recent studies are refuting the claims of omega-3 enthusiasts that the fatty acid, which is produced mainly by algae and is found in the animals that eat them (like fish), is the ultimate "brain food." Anecdotal reports had suggested that these fatty acids, called omega-3 because they have a kink in their structure three bonds from the end of the carbon chain, could improve brain function for everyone from the elderly to the unborn. Vitamin supplements of fish oil have therefore been flying off the shelves.

People who eat lots of fish are less likely to develop dementia or cognitive problems late in life. Observational studies have also found that taking omega-3s during pregnancy can reduce postpartum depression and improve neurodevelopment in children. What's more, animals with an Alzheimer's-like condition are helped by docosahexaenoic acid (DHA), one of several omega-3 fatty acids. And DHA disappears from the brains of people with Alzheimer's. [ScienceNOW]

In an Alzheimer's study

published in The Journal of the American Medical Association, researcher Joseph Quinn

gave about 400 patients suffering from mild to moderate Alzheimer's 2 grams of either omega-3 DHA or a placebo each day. After 18 months, none of the patients showed improvement of their Alzheimer's symptoms.

“It’s a very solid and unfortunately negative result,” says Quinn. He thinks now that the intervention came too late, and he’s not alone. “If you’ve got big holes in your brain, no amount of DHA” is going to seal them up, says Alan Dangour, a public health expert and nutritionist at the London School of Hygiene & Tropical Medicine. [ScienceNOW]

It's possible that omega-3 might be effective if taken over the long term before the disease develops, since studies of people who eat large amounts of fish often show they are less likely to suffer from dementia in old age. But following people for a large portion of their lives under controlled dosage conditions of DHA would be an extraordinarily expensive undertaking.

“That’s been shown loads and loads of times,” [Dangour] says, and “it looks like there’s some link.” But the connection may not be in the fish, he says. Instead, it could be in what the fish-eaters aren’t consuming—for example, meats with saturated fat that have been associated with dementia. [ScienceNOW]

, published in JAMA two weeks ago, 2,300 pregnant women took either 800 milligrams of DHA or vegetable oil per day. They were tested for postpartum depression after the birth, and their children were tested for cognitive function after 18 months. The results showed no differences between the fish oil and vegetable oil groups.

“I think a lot of us have been skeptical that something as easy as taking a DHA supplement would improve neurologic development,” said Dr. William Barth Jr., chief of maternal-fetal medicine at Massachusetts General Hospital. “I wish it were so simple, that there was a pill we could take to make our children smarter.” [The New York Times]

While some may be disappointed to find that omega-3 fatty acids aren't brain wonder drugs, there is still evidence that they play an important role in heart and immune system health. And it's possible that DHA may improve cognitive function in patients who are part of a subset of the general population, like premature babies or people who don't carry a particular Alzheimer's gene, though conclusive studies have yet to be performed on those groups. Related content: 80beats: Did Dining on Seafood Help Early Humans Grow These Big Brains?

80beats: Omega-3’s in a Cow’s Diet Provide a Health Boost—to the Atmosphere

DISCOVER: I'll Have My Burger Petri-Dish Bred, With Extra Omega-3