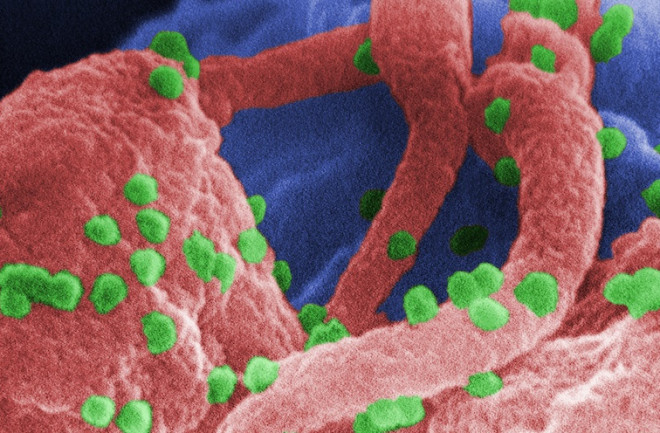 Scanning electron micrograph of HIV (green spheres) on human lymphocytes. Courtesy CDC Two HIV-positive patients who underwent bone marrow transplants have stopped taking HIV medications and have since shown no signs of the virus returning, doctors reported today. The news raises hopes that someday existing AIDS drugs, which simply manage the disease, could be replaced by a cure. But doctors caution that it's too early to gauge whether the treatment will have lasting effects. The two men had been infected with HIV for about 30 years. They both developed a cancer, lymphoma, which required a bone marrow transplant. Doctors at the Dana-Farber/Brigham and Women's Cancer Center in Boston transplanted healthy donor marrow into the patients a few years ago. Soon after, levels of the HIV virus in their blood steadily dropped until they were undetectable. Still, the men remained on antiretroviral drugs until earlier this year. One patient has now been off antiretroviral drug treatment for 15 weeks and the other for seven weeks, and no signs of the virus have been detected in either patient so far. The findings were announced today at the International Aids Society conference in Kuala Lumpur. Doctors think that the continued antiretroviral treatment kept the transplanted immune cells from becoming infected with HIV. Usually bone marrow recipients stop taking their AIDS medicines to undergo chemotherapy after the transplant. But the two men received only mild chemotherapy and remained healthy enough to continue their HIV medications during cancer treatments.

Precedent for a cure

A similar result was reported in 2007 when Timothy Brown, known as the "Berlin patient," became the first person cured of AIDS. Brown also had a bone marrow transplant to treat cancer. However his marrow came from a rare donor who was resistant to HIV due to a mutation in the CCR5 gene. The two Boston patients received cells without this mutation. Thus it may be that the marrow transplant itself, rather than the mutation, is the critical component of the cure. Bone marrow transplants are, however, not without risks. Graft-versus-host disease can develop, wherein the recipient's immune system attacks the transplanted cells. Patients face a 15-20 percent mortality rate within the first few years. Thus a transplant for the average AIDS patient is unlikely to be the best course of treatment. But with today's announcement, researchers have a new and promising avenue of investigation toward the dynamics of AIDS and thus a future cure that exploits similar tactics to beat the disease.