Type 2 diabetes, cardiovascular disease, even some mood and mental disorders ⁠— all might be helped with a little nature time. 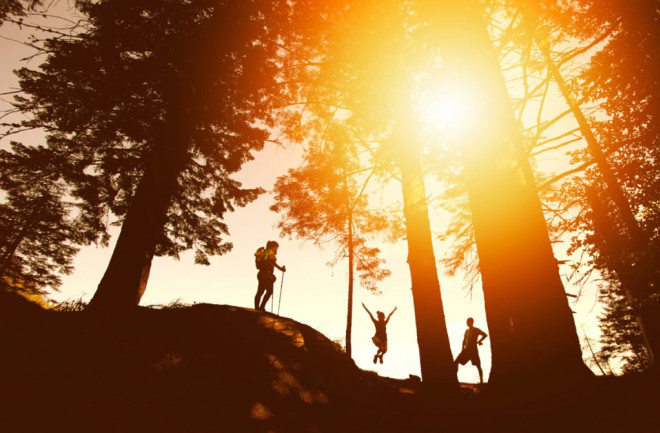 By now, you probably know that spending time in nature — hiking through a forest, walking through a park, even hanging out on a beach — is good for your health. There has been many a study on how outside time can lower a person’s risk for developing things like Type 2 diabetes and cardiovascular disease, and can alleviate symptoms of some mood and mental disorders.

Now, researchers have begun to quantify how much time you’d need to spend in nature to see such health effects.

Scientists from the University of Exeter in England and Uppsala University in Sweden surveyed nearly 20,000 British people in a study published Thursday in Nature Scientific Reports. In the questionnaire, participants estimated how much time they’d spent outside in the last week. Specifically, they had to have been in “open spaces in and around towns and cities, including parks, canals and nature areas; the coast and beaches; and the countryside including farmland, woodland, hills and rivers,” according to the paper. The only thing that didn’t count toward that tally was the time people spent in their own gardens.

People also self-reported their health as very bad, bad, fair, good or very good. Finally, they noted their well-being by answering the question “Overall, how satisfied are you with life nowadays?” with answers ranging from 0 (not at all) to 10 (completely).

It was a simple set-up, but an enlightening one. The researchers found that people who spent at least two hours a week in a natural setting tended to report better health and well-being. And that time spent getting more in tune with the Earth didn’t have to happen all at once — you could slice that time up any way you want, just so long as your weekly total amounted to two hours.

Even more good news: “The majority of nature visits in this research took place within just two miles of home,” says Mathew White, an environmental psychologist at the University of Exeter who also led the study, in a press release. “So even visiting local urban greenspaces seems to be a good thing.”

But if you’re thinking that spending more than a couple of hours each week outside will lead to even better health outcomes, it’s not quite that simple. People who indicated that they’d spent more than the two-hour minimum in nature didn’t report any better health or well-being on the survey.

Something to Shoot For

Clearly, there are some big caveats that come with a study that relies on self-reporting. But, the researchers hope that this can serve as a good stepping stone for future work. In the meantime, the results at least give people a goal to work toward. “Two hours a week is hopefully a realistic target for many people,” White says, “especially given that it can be spread over an entire week to get the benefit.”

More From Discover
Mind
Gut Bacteria's Role in Anxiety and Depression: It’s Not Just In Your Head
Mind
What Psilocybin Psychedelic Mushrooms Are Teaching Us About Human Consciousness
Mind
Try These 6 Science-Backed Secrets to Happiness
Health
Why Eating Disorders Are so Difficult to Treat
Health
Does Seasonal Affective Disorder Get Worse with Age?
Mind
Why Are Emotions Contagious?
Recommendations From Our Store
My Science ShopDiscover STEM Kits
My Science ShopDiscover 2022 Calendar
My Science ShopStrange Science
My Science ShopElements Flashcards
Shop Now
Stay Curious
Join
Our List