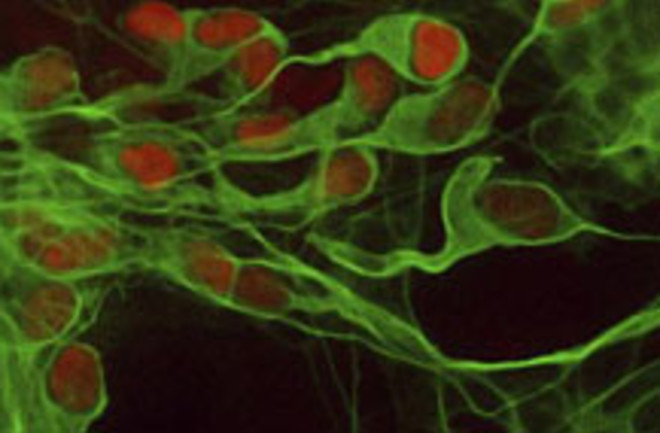 In a striking achievement, researchers have taken ordinary skin cells from two elderly women suffering from Lou Gehrig's disease, also known as amyotrophic lateral sclerosis, and have reprogrammed those cells to act like stem cells, the versatile cells that can grow into almost any kind of specialized cell. Then the researchers programmed the cells to turn into motor neurons, the type of nerve cells that waste away and die as ALS progresses. The new nerve cells won't be used in any sort of experimental treatment; instead researchers will look for flaws in these nerve cells to study the disease's mechanism.

"Now we can make limitless supplies of the cells that die in this awful disease. This will allow us to study these neurons, and ALS, in a lab dish, and figure out what's happening in the disease process," said [study coauthor] Dr. Kevin Eggan [Reuters].

This is particularly useful for ALS because the nerve cells affected by the disease are in patients' spinal cords, making it impossible for researchers to take cell samples for study. The experiment, reported in the journal Science [subscription required], used a process for reprogramming adult cells that was discovered by the Japanese researcher Shinya Yamanaka two years ago, which dodges the ethical quandaries involved in using stem cells from embryos. However, this method of cell reprogramming uses viruses to transport new genes into the cells, and

can trigger cancer and other undesired effects. Research teams around the world are now looking for alternative methods of reprogramming cells without using viruses. Unless a safer method is found, the technique can't be used to make treatments [Bloomberg].

Because the new nerve cells growing in petri dishes are a genetic match with the cells in the patients' bodies, researchers says that this technique points the way towards personalized therapies for genetic diseases.

In the long term, the new method could be applied to grow a patient's own cells and tissues which, if the underlying cause of the disease is corrected in them, could be used to create tailor-made cells to treat debilitating disease [Telegraph].

Similar work on other genetic diseases is likely to follow; at recent scientific meetings researchers have discussed reprogramming cells