Tuberculosis Resistant to All Known TB Drugs Surfaces in India 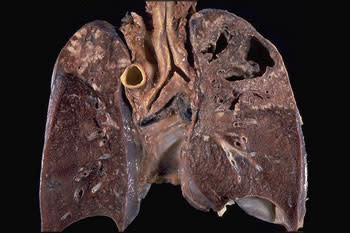 When tuberculosis kills lung tissue, it can produce gaping holes like in the lung on the right.

For a long time, tuberculosis

was a gruesome and incurable disease. Antibiotics changed that, but over the last century, as the drugs have been incorrectly used, the tuberculosis bacterium has been developing resistance to them. Multi-drug resistant tuberculosis

, which requires a cocktail of many drugs to treat it, has become common. Now Indian doctors have reported in a medical journal that a strain that is resistant to all known drugs for tuberculosis has appeared in Mumbai

. Twelve patients so far have been diagnosed with the strain

, and it's likely that they are just the tip of the iceberg in terms of those infected. At the Superbug blog, Maryn McKenna explains that this is the third time on record that totally drug-resistant TB (TDR-TB) has appeared

They were both diagnosed by local doctors and treated with repeated rounds of the normal TB drugs — three rounds each — before someone recognized that something unusual was happening. They were separately admitted to the Morelli hospital with what the paper calls “a very severe clinical picture (extended bilateral cavities),” which means the TB infection had eaten away the tissue of their lungs, leaving empty dead zones. (If you’d like to see what that looks like, here are some pathology images, not from these women.) The first woman actually caught multi-drug resistant TB from her mother and gave it to her 14-year-old daughter (who is not the second case in the paper — more on her below). She was treated in three different hospitals, with 17 different antibiotics, for 422 days, or 14 months — and took TB drugs for 94 months before her untreatable disease killed her. The second woman — whether she was related to the first, or lived near her, is not made clear — was in one other hospital before being admitted to the TB specialty institution in Sondalo. Her inpatient treatment took 625 days and also involved 17 different drugs. After she was discharged, she was on a drug regimen for 60 months before untreatable TB killed her also.

The first woman's daughter survived her TDR-TB...but only after 3 years of constant treatment and having part of a lung surgically removed. These cases, and those in Iran and India, are reminders of how important it is to treat tuberculosis correctly; thoroughly wiping out the bacterium from each patient can prevent yet more resistant strains from arising. As McKenna writes, the World Health Organization said last year that a third of the countries harboring strains resistant to any of the drugs, let alone all of them, do not have the technology to detect the resistance.