TreeMix: Who were the West Eurasian ancestors of Ethiopians?

One of the primary concerns/questions I had about Luca Pagani's paper on the genetic origin of Ethiopians is that he found that their West Eurasian ancestor was closer to Levantine than Arabian. I was confused by this because on model-based clustering (e.g., Admixture) when you push down to a fine level of granularity you always see that the Ethiopians cluster with the Yemenis for their non-African ancestry. More precisely, Yemeni Jews are often ~100% component X, which ~50% of the ancestry of Ethiopians. From what I recall Pagani et al. used haplotype windows which they assigned to Eurasian or African ancestral components, and they compared these to the populations related to the putative ancestral groups. Because Pagani et al. used blocks of the genome, rather than just on specific genotypes, I weight their finding more strongly. But I wanted to double check with TreeMix if the finding in Admixture was peculiar. So again, I took a ~150,000 SNP set ran it on TreeMix with migration = 5. 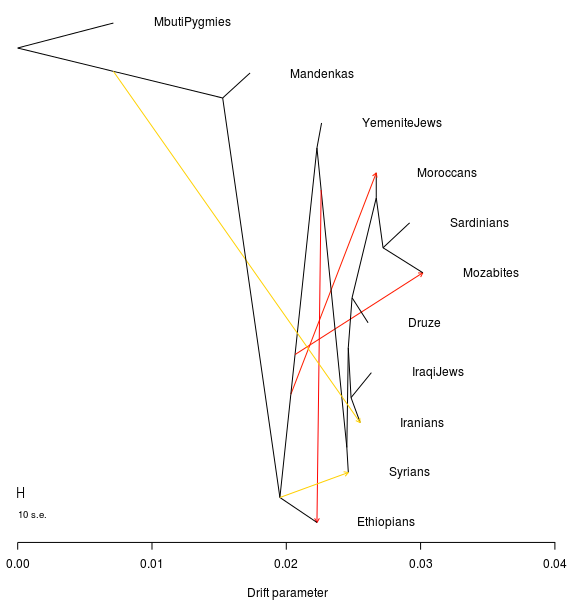 Again, you see that the gene flow to the Ethiopians is coming from a position on the tree rather close to Yemenite Jews. One model which may explain this, and still align with Pagani's findings, is that Arabians themselves are a synthetic population. A "pure" Yemenite Jew may have ancient admixture of African affinity beneath an intrusive element from the north. The parallelism between Ethiopia and Arabia in this model is clear, with the major difference being magnitude of the source population admixture (greater in Arabia), as well as some differences of the target population. This again reiterates us to be careful of trust first-blush summaries.