Treating the Brain With Ultrasound and a Ceramic 'Window' 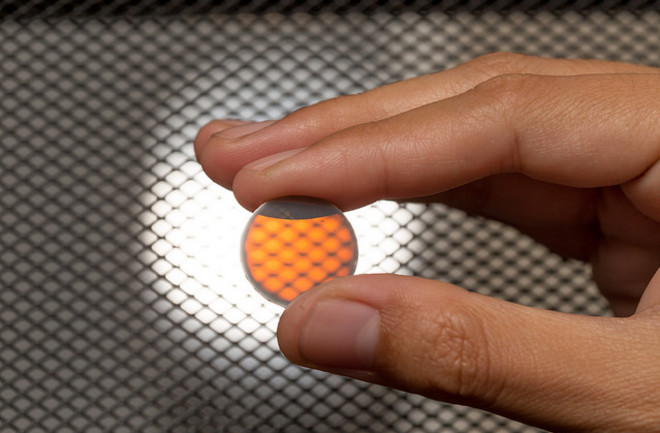 The transparent ceramic "window." (Credit: David Baillot/UC San Diego Jacobs School of Engineering) One of the biggest problems in neuroscience is very simple — access. The brain is encased in the bony cranium, and many regions are buried beneath layers of brain tissue, making any intrusion potentially dangerous. Physically probing into the brain is also extremely difficult, and because you can't just cut it open and sew it back up afterward as you might another organ, surgeons would benefit from less invasive methods. Now they might have one. With a special kind of ceramic, researchers from the University of California-Riverside have created a small "window" that can be implanted in the skull to allow for ultrasound therapies. Bone doesn't allow the ultrasonic sound waves through, but this special blend of yttrium and zirconium does. Small patches of the ceramic could be surgically inserted into the skulls of patients undergoing ultrasound therapy to allow them to receive treatments without invasive surgeries to expose the brain itself, the researchers say. The material is already used for dental crowns and hip implants, and is both biocompatible and tends not to shatter. The same team has already used them for laser-based treatments, and experimented here with different formulations of the ceramic to find a composite that works best for ultrasound waves. They found that materials with low porosity — the number of bubbles or tiny spaces inside — tended to work best for allowing ultrasound through. They were able to achieve up to an 80 percent transmission rate, far better than the nearly total impermeability of bone. They published their work Wednesday in Advanced Healthcare Materials. Once they're past the skull, low-frequency ultrasound waves can physically manipulate the electrical signals that pass through our neurons. This, along with the fact that it doesn't harm tissues or require invasive electrodes, makes it a promising avenue for researchers attempting to treat a range of neurological diseases like Parkinson's and Alzheimer's. First, the waves need to be able to reach the brain itself, however, something only previously possible with surgery. With a new window into the skull, however, treatment may be as simple as holding an ultrasound probe to a patient's head.