What are fecal bacteria doing on our leafy greens? 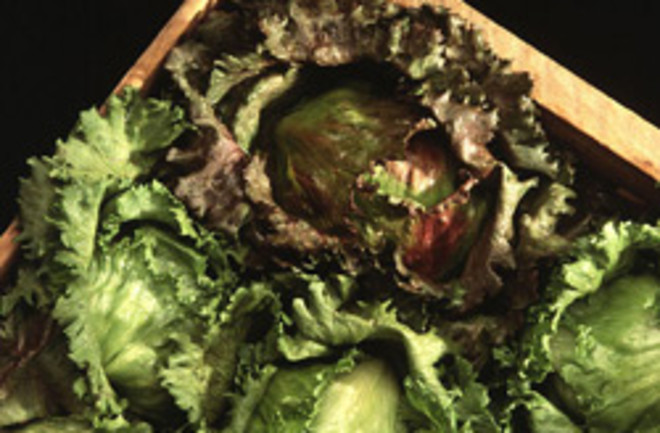 E. coli congregate on leafy greens around the stomata—holes through which the plant respires—small populations can survive even a triple-wash in chlorinated water. | Courtesy of USDS/ARS

A pig, a bug, a bag of spinach: It sounds like the answer to a riddle, and in a way, it is. Sometime late last summer, a wandering band of wild pigs trampled a fence and trotted into a spinach field in California’s Salinas Valley. As they rooted around in the leafy greens, they most likely left behind feces infested with a virulent strain of the intestinal bacterium Escherichia coli—picked up, it appears, from a nearby cattle pasture. The hardy breed of E. coli, dubbed O157:H7, normally lives harmlessly by the billions at the rear end of a cow’s gut. But in this case, the bacteria nestled craftily in the crevices of the spinach leaves, sticking to the vegetables as they were harvested, chopped, washed, bagged, and then transported across the country to states from Oregon to Maine. In September and October, nearly 200 people who dined on the infested spinach became ill with bloody diarrhea. Thirty-one developed severe kidney disease, and three people died.

Scientists at the Food and Drug Administration traced the toxic strain of E. coli to the California ranch after testing bacteria-tainted spinach leaves and matching them to fecal samples from a wild boar that had been killed on the farm—the first time an outbreak of E. coli poisoning from produce had been tracked directly to its source. This spate of illness was just one of at least three major produce-linked outbreaks of E. coli O157 that occurred in 2006, triggering a nationwide fear of fresh vegetables. In November and December, 71 people in five states became sick after eating at Taco Bell outlets, an epidemic that was later traced to contaminated iceberg lettuce, and another 81 in three states became sick after eating tainted lettuce at a fast-food chain called Taco John’s.

The wave of salad-linked sickness highlights an alarming twist in the history of an infection originally known as “hamburger disease” when it popped up in 1982. Now a bug that is famous for lurking in undercooked beef is hitching rides on greens like lettuce and spinach. The question is, why? And how can we stop it?

Contamination of fruits and vegetables by rogue E. coli is not new: Since 1991, small outbreaks have been linked to melons, grapes, coleslaw, sprouts, and apple juice. By 1998, mandatory warning labels on unpasteurized apple juice led to a decline in drink-related outbreaks. At the same time, though, the craze for bagged greens had begun. Between 1997 and 2005, prewashed packaged salad sales nearly tripled, creating a $3-billion-a-year industry.

The nationwide distribution of mixed leafy greens makes it far more likely that any E. coli they harbor will be spread far afield. “When lettuce was shipped as entire heads, a contaminated head of lettuce was unlikely to contaminate another head of lettuce,” says James Kaper, a microbiologist at the University of Maryland School of Medicine in Baltimore. “But when lettuce is chopped up and washed together, then contamination from one head of lettuce could be spread much further.” Although processors triple-wash the leaves in chlorinated water before bagging, a minute amount of surviving bacteria—just 50 organisms—is enough to make a person ill.

E. coli O157 can wreak such havoc because it secretes one of the most potent toxins ever described, second only to that released by botulism bacteria. Known as shiga, this toxin is harmless to cattle. In humans, however, it sparks a cascade of symptoms that begin when the bacterium injects a sort of syringe into the cells of the intestinal wall. First the bugs secrete a protein that helps them adhere to the gut epithelium; then they shoot out shiga toxin, which can reach the bloodstream after destroying intestinal cells. As it circulates, the toxin can attack the kidneys, invade the brain, and—in the most extreme cases—bring on multiple organ failure and death. Those who survive may suffer paralysis, blindness or chronic kidney failure. Antibiotics are worse than useless; because they break up bacterial cells, they can trigger the release of yet more toxin.

According to the Centers for Disease Control, E. coli O157 causes an average of 73,000 cases of infection and 61 deaths in the United States each year. The number of outbreaks has actually declined since reaching a peak in 2000. Nevertheless, “it is a worldwide problem,” says microbiologist John Fairbrother of the University of Montreal, “and the ideal solution has not been found yet.” Although the number of cases from contaminated meat may be declining—the result, he says, of factors like more rigorous sanitary controls in slaughterhouses and thorough heating of hamburgers by fast-food chains—the bug is spreading farther in foods that are less likely to be cooked (and therefore sterilized), such as fruit and lettuce. Infections from other, rarer toxic E. coli strains, dubbed O26 and O111, are also being diagnosed more often.

The bacteria have a worrisome ability to survive in many different environments outside the colon, Fairbrother says. Experiments carried out by Michael Doyle, director of the University of Georgia Center for Food Safety in Griffin, show that E. coli O157 can survive in the field for more than 77 days on lettuce, on carrots for at least 175 days, and on onions for at least 85 days. The question is how a bacterium from a cow’s gut makes its way onto a carrot. One obvious way is through the spreading of animal manure or recycled, treated human sewage on produce fields. “There is no prohibition to using raw manure on crops, so long as the crops aren’t organic. Not very appealing,” says Caroline Smith DeWaal, director of food safety at the Center for Science in the Public Interest in Washington, D.C. “Treated sewage may be used in certain water systems that then are used for irrigation. Even tertiary treatment of sewage may not be enough to totally eliminate the hazards linked to E. coli.” Contaminated runoff from dairies can seep into adjacent fields—as probably happened in the Taco John lettuce outbreak of 2006—and in summer, dust from cattle stalls can drift onto nearby crops. Other animal feces can also carry the bacteria.

If the bagged salad scare continues, produce farmers could face the same kind of financial trouble that threatened cattle ranchers in the 1990s. A 2003 article in in lost sales over the previous decade. Fortunately for lettuce producers, they can benefit from the science being pursued by beef farmers to save their industry. One such line of research is a vaccine to prevent cows from shedding virulent E. coli in their feces. Veterinarian David Smith at the University of Nebraska at Lincoln has spent five years testing this vaccine, which stimulates the production of antibodies against the proteins that the bacteria secrete to help them attach to the gut wall. Smith’s results show that the vaccine reduces the number of cattle shedding virulent E. coli in their feces by 65 percent. In December 2006, Bioniche Life Sciences, a Canadian pharmaceutical company, was granted a license by the Canadian Food Inspection Agency to distribute the vaccine to cattle veterinarians there. Approval is still pending in the United States.

Other approaches are more experimental. Todd Callaway, a microbiologist at the USDA Agricultural Research Service in College Station, Texas, has poked around in cattle feces to find an array of bacteriophages—viruses that attack bacteria—that target E. coli O157. In a recent study, he fed a cocktail of these viruses to sheep infected with the O157 bacteria and found a sharp reduction in the quantity of that strain of E. coli in their intestines. He is now investigating whether spraying the viruses onto cattle hides—a major source of infection in slaughterhouses—could also reduce their bacterial load.

Even if these prevention methods succeed, they are unlikely to be foolproof, so scientists are also developing new ways to attack rogue E. coli if they reach humans. One approach is to target the genes that make E. coli O157 so virulent. James Kaper has discovered that when the bacterial population reaches a critical mass in the large intestine, the microbes secrete hormonelike compounds. These compounds, in turn, switch on the genes that enable the bacteria to colonize the gut wall and to exude their toxin. Disrupting this bacterial groupthink could provide a way to prevent invasion. Vanessa Sperandio, Kaper’s former postdoc who now heads her own lab at the University of Texas Southwestern Medical Center in Dallas, has discovered three molecules that can block interbacterial signaling among E. coli. She plans shortly to begin animal testing of a drug derived from one of the three molecules.

Another option is to defang the shiga toxin itself, a tactic adopted by microbiologist Alison O’Brien of the Uniformed Services University in Bethesda, Maryland. She has created toxin-smothering antibodies that have been shown to be safe in humans by Caprion Pharmaceuticals, paving the way for efficacy trials. Such an antibody-based treatment would be most effective if administered soon after the onset of infection.

Ultimately, though, quashing the bacteria at their source—the cows—is probably the most effective way to prevent E. coli O157 infections in humans. “This isn’t rocket science,” says DeWaal. “It’s critically important that both human and animal waste be kept off crops. It’s appropriate to have restrictions on the use of raw manure, to have monitoring of composting processes to make sure they’re effective, and to restrict the use of water that may contain treated sewage.” But Kaper adds a caveat. “There are so many different bugs, there are so many different types of foods, so many different ways in which food is prepared and processed,” he says. “I don’t think the food supply can be totally safe.”