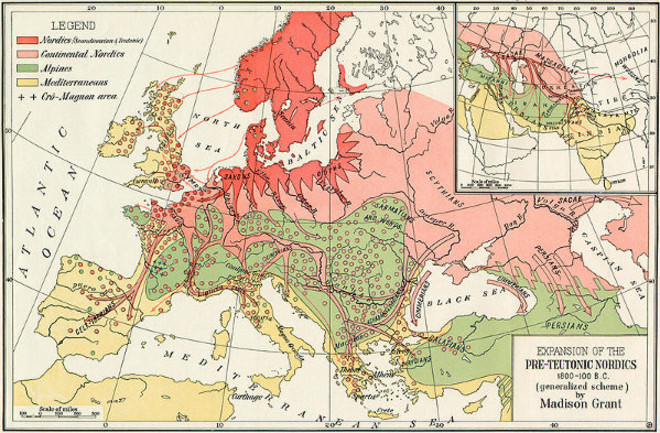 100 years ago a science based physical anthropology offered up very little as to a systematics of mankind beyond what you could intuit from visual assessments of phenotypic similarity alone. Instead, there were fantastical taxonomies which had little basis in the true pattern of variation and more in the nationalistic debates of that period. The Nordic, Mediterranean, and Alpine trichotomy of the European peoples had only marginally more concrete reality than the division between the Vanyar, Noldor, and Teleri. We don't live in such a fantastic age. Much of the mystery, and so potential for mischief, is gone. The "post-genomic" era means that old questions only vaguely perceived in the past are now well resolved. Quite often readers will ask a question as to the phylogenetic relationship between population A & B. If I don't know off the top of my head, which is the norm, I'll go to the search engine and look up what I've written on the topic. This has started to become tedious, in part because Wordpress' search engine leaves something to desired. So I have some papers bookmarked for immediate reference. They're of wide scope (i.e., they don't focus on just one population such as the Jews) and draw from a large number of markers to get a good picture of total genome relatedness. The focus within these papers tends to be genetic distances and relationships, not other topics of great interest such as natural selection. Also, I've tried to find links accessible to people without institutional access (for the Science link free registration will do it). If you can think of other papers, please leave the link in the comments. Worldwide human relationships inferred from genome-wide patterns of variationGenome-wide Insights into the Patterns and Determinants of Fine-Scale Population Structure in HumansToward a more uniform sampling of human genetic diversity: A survey of worldwide populations by high-density genotypingThe Population Reference Sample, POPRES: A Resource for Population, Disease, and Pharmacological Genetics ResearchThe Genetic Structure and History of Africans and African AmericansGenes mirror geography within EuropeGenomic Dissection of Population Substructure of Han Chinese and Its Implication in Association StudiesReconstructing Indian population historyWhole-Genome Genetic Diversity in a Sample of Australians with Deep Aboriginal AncestryGenetic Variation and Population Structure in Native Americans