Neuroskeptic has a post up, The Coming Age of Fetal Genomics:

So they don't. Instead, they buy a $100 test kit, they each provide a small blood sample and send it off to one of the companies offering fetal genome testing. At the testing lab, they can separate out the mother's DNA from that of the fetus, both of which are present in the mother's blood. By comparing the fetal genome to the mother's and father's, it's easy to spot de novo mutations. If a certain gene doesn't match either the mother or the father's sequence, it's mutated. A few days later the results are back. There are several mismatches detected. Most are benign - they're not predicted to have any biological effects. But there's one, a deletion of a few thousand bases in a gene involved in brain development. This deletion is predicted to raise the risk of epilepsy and autism from 1% to 10% apiece. The parents now have a decision to make. The mutation is a one off, it's not inherited. If they conceive again... roll the dice again... and it'll be gone. Do they terminate? Like the adverts say, "Some people disagree with this, but we say there's only one person who really matters: your baby." 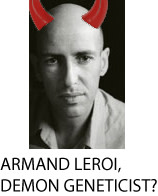 Probably not too surprising to readers of this weblog. Years ago I joked that Armand Leroi was a "demon geneticist" for broaching the topic of neo-eugenics. At this point his article isn't really timely, it's almost passé! Recently on Facebook an evangelical Christian friend from high school posted a photo of a child with Down Syndrome, making the case for the value of such a life. We're beyond thought experiment stage, CVS and some of the non-invasive methods are "online." If Armand was a dark creature, we live in the age of Gog and Magog already. The media just isn't reporting it for whatever reason. But I'm not here to scare you. Rather, there is a positive and ethically uncontroversial method by which we can reduce the expected mutational load of any future fetus for a wide swath of Americans. This applies particularly to people who are the core audience of this weblog. Not only am I going to put a proposition out here, but I considered the cost vs. benefit for myself (ultimately, I decided that it wasn't worth it for various reasons). Let me go to the section of the post which highlights what I'm getting at:

....new mutations, out of the blue, they can affect any family. A clear family history is no protection. They don't discriminate by race or lifestyle. It's just the luck of the draw - except that older parents are at much higher risk, especially older fathers. In the case of our couple, she's 28 and he's 32. Perfectly normal for this day and age - but very old in biological terms. Humans evolved to be grandparents by 32, not parents....

Sperm are replicated throughout your life. There's a hypothesis that it is through the male germline that genetic load tends to creep into the population (or, more positively, mutations which ultimately may be the source of variation which drives evolution). Circumstantial evidence implies the children of older males may have decreased quality of life (e.g., higher rates of cancer). I recently asked a researcher who has looked into the question of genetic load in humans, and he seems to lean toward the proposition that sperm quality does decrease as a linear function beyond one's early 20s. If you are a forward thinking person I assume you'll already have anticipated me: massive banking of the sperm of young men may result in greatly reduced later life aggregate morbidity on the social scale. Obviously some of the same applies to eggs, but that's a more difficult and expensive procedure. And, the storage conditions have to be optimal. But I don't see this as an insurmountable engineering problem. You should extend this to pre-implantation genetic diagnosis as well, take the zygote(s) with the lowest mutational load values and implant them. But that would be more controversial, due to the expense and the ethics. I began thinking of this only a year or two back when I was going about starting a family, relatively late in life. Since I'm already "in the game," and I can't go back into the past to get my young sperm, I didn't do this. And long term storage isn't available in all locales. But if you are a young man who lives in a large urban area and has a decent disposable income, why not? Your symmetrical children with low mutational load will thank you for it.