To the antipode of Asia 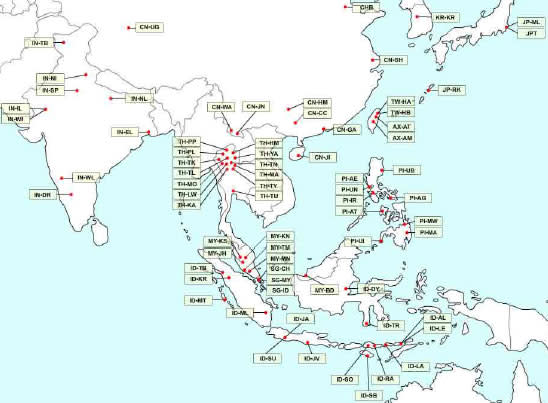 The Pith: Southeast Asia was settled by a series of distinct peoples. The pattern of settlement can be discerned in part by examination of patterns of genetic variation. It seems likely that Austro-Asiatic populations were dominant across the western half of Indonesia before the arrival of Austronesians.

About a year and a half ago I reviewed a paper in Science which did a first pass through some of the findings suggested by the HUGO Pan-Asian SNP Consortium data set, which pooled a wide range of Asian populations. You can see the locations on the map above (alas, the labels are too small to read the codes). The important issue in relation to this data set is that

it has a thick coverage of Southeast Asia, which is not well represented in the HGDP

. Unfortunately there are only ~50,000 markers, which is not optimal for really fine-grained intra-regional analysis in my opinion. But better than nothing, and definitely sufficient for coarser scale analysis. A few things have changed since I first reviewed this paper. First, I pulled down a copy of the Pan-Asian SNP data set. I'm going to play with it myself soon. Second, after reading Strange Parallels, volume 1 and 2, I know a lot more about Southeast Asian history. Finally, the possibility of archaic admixture amongst Near Oceanians makes the genetics of the regions which were once Sundaland and Sahul of particular interest.

Before we hit the genetics, let's review a little of the ethnography of Southeast Asia, as this may allow us to tease apart the meaning of some of the results. The largest ethno-linguistic group in Southeast Asia is that of Austronesians. An interesting point in relation to Austronesians is that they aren't limited to Southeast Asia. As you can see the Austronesians range from off the coast of South America (Easter Island) to southeast Africa (Madagascar). Though there's debate about this issue it seems to me that the most likely current point of departure of the Austronesian migration is Taiwan. Though today Taiwan is predominantly Han Chinese, that is an artifact of relatively recent migration. The indigenous population is clearly Austronesian. 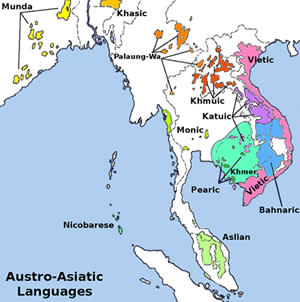 A second language family which is somewhat expansive, though Southeast Asia focused, is Austro-Asiatic. There is a great deal of internal structure to this ethno-linguistic group, in that there is a well known coherent Mon-Khmer cluster, which includes some ethnic minorities in Burma and Thailand, as well as Cambodians. Additionally you have Vietnamese in the east and some tribal groups in northeast India. There has long been debate about whether these Indian tribes, the Munda, are the original Indians, to be supplanted later by Dravidian and Indo-Aryan speakers, or intrusive to the subcontinent. I believe that the most recent genetic data points to intrusion from the east into South Asia. Austro-Asiatic was likely less fragmented in mainland Southeast Asia before the historical period. Both the dominant ethnic groups in Burma and Thailand are intrusive and absorbed Mon-Khmer populations, the latter dynamic being historically attested. Finally there are the ethno-linguistic clusters of Burma and Thailand (and Laos). The former nation is dominated by the Bamar, a Sino-Tibetan population with origins in South China ~1,500 years ago. In Burma the Mon substrate persists, while the Shan people of Thai affinity reign supreme across the northeastern fringe of the nation. In Thailand and Laos the Mon-Khmer substrate has been marginalized to isolated residual groups. But it is notable that in both these polities the Mon-Khmer populations set the tone for the civilizational orientation of the conquering ethnicities. The Thai abandoned Chinese influenced Mahayana Buddhism for the Indian influenced Theravada Buddhism of the conquered populace. Despite the notional ethnic chasm between the Thai and the Khmer of Cambodia, the broad cultural similarities due to the common roots in the society of the Khmer Empire is clear. With the ethnographic context in place, let's look at the two primary figures which we get from the paper. The first figure shows a phylogenetic tree of the relationships of the populations in their database, color-coded by ethnolinguistic group. Next to that tree there's a STRUCTURE plot at K = 14, which means 14 ancestral populations. They've colored the bar components to match the ethno-linguistic classes (e.g., red = Austro-Asiatic, an Austro-Asiatic modal component). The second figure shows two PCA panels. PC 1 is the largest component of genetic variance in the data set, and PC 2 the second largest. I've added a label for the Papuan populations. 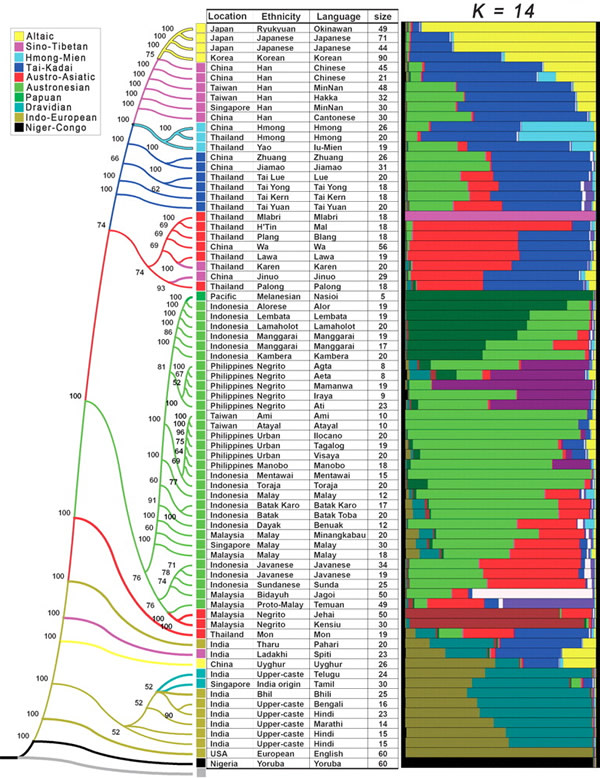 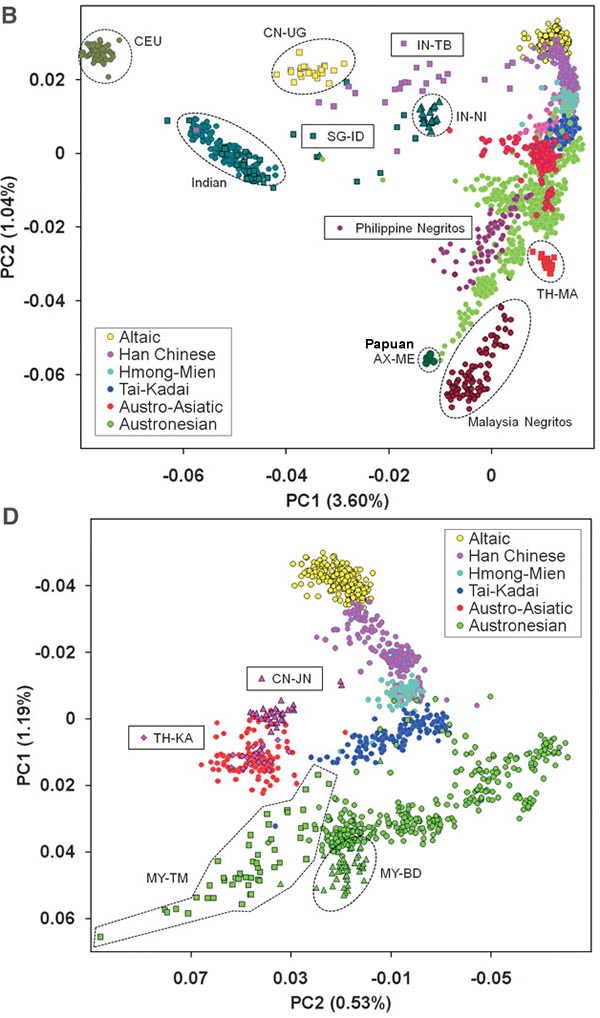 Going back to the chronology above, we know that the Thai came last. The Sino-Tibetans came before then. The issue I wonder about is the relationship of the Austronesians and Austro-Asiatic groups. Interestingly the Austronesian proportions are high not only in island Southeast Asia, but also among many South Chinese groups. In contrast, among the Mon-Khmer hill tribes of Thailand, who are presumably representative of groups which were present before the Thai migrations, it is absent. And it is notable to me that not only does Austro-Asiatic exhibit fragmentation in relation to Thai and Sino-Tibetan, but it does so to some extent with relation to Austronesian! The indigenous folk of central Malaysia seem to speak a Austro-Asiatic language. Finally, the Austro-Asiatic component rises in frequency on the southern fringes of island Southeast Asia, in densely populated Java. Because of the thicker textual record for mainland Southeast Asia we know that the Austro-Asiatic groups predate the Thai and Sino-Tibetan ones. I believe that the Austro-Asiatic element also predates Austronesian in Southeast Asia. That is, I believe that an Austro-Asiatic substrate existed before the arrival of Austronesians from the zone between the Philippines and Taiwan. The Negritos of inner Malaysia, who are genetically and physically distinctive, speak Austro-Asiatic languages. This should not be surprising, it seems that hunter-gatherer groups often switch to the language of resident agriculturalists. Because of their isolation some of these groups have persisted in speaking the languages of the "first farmers" of Malaysia, even after those pioneers were absorbed by newcomers. The PCA shows clearly that the Austronesians are the genetically most varied of these Southeast Asian groups. Why? I believe it is because they are late arrivals who have admixed in sequence with whoever was resident in their target zones. In the east of island Southeast Asia the admixture occurred with a Melanesian population. Both the STRUCTURE plot and the PCA show evidence of this sort of two-way admixture. The STRUCTURE is straightforward, but note the linear distribution of the Austronesians in relation to outgroups in the first panel, and implicitly on the second. Why is the Austro-Asiatic fraction higher in Java than to the zones in the north? Java is today the most densely populated region of Indonesia because of its fertility. I hypothesize that the spread of the Austronesians was facilitated by a more effective form of agriculture which could squeeze more productivity out of marginal land. Relative to Java the Malay peninsula, Borneo, and Sumatra, are agriculturally marginal. The densities of the Austro-Asiatics was greatest in Java, while they were very thin in the regions to the north. It seems likely that the Austronesians engaged in a series of "leap-frogs" to islands and maritime fringes which were not cultivated by the Austro-Asiatic populations. Some Indonesian groups, such as the Mentawai who live on the island of the same name off the western coast of Sumatra, cluster with the Taiwanese, as if they transplanted their society in totality. One thing that needs to be mentioned when talking about the genetics and prehistory of Southeast Asia are the "Negritos." As indicated by their name these are a small people with African-like features. As is clear from the charts above these people are not particularly genetically close to Africans. The Philippine Negritos seem to have some relationship to the Melanesians. Interestingly they speak an Austronesian language; again following the trend where marginalized indigenes seem to pick up the language of their farming neighbors. The Negritos of Malaysia are somewhat different,

but note that one of the populations exhibits Austro-Asiatic, but not Austronesian, admixture.

This comports with my supposition that the Austro-Asiatic populations were the first to marginalize these tribes before themselves being assimilated by the Austronesians. Someone with a better ethnographic understanding of Southeast Asia than I could probably decode the results above with greater power. But at this point I think we've got a chronology like so: 1) First you have hunter-gatherer populations of broad Melanesian affinities in Southeast Asia. 2) Then Austro-Asiatic populations move south from the fringes of southern China. Some push west to India, while others leap-frog south to zones suitable for agriculture such as Java. 3) Then Austronesian populations sweep south along water routes, and marginalize the Austro-Asiatics in island Southeast Asia, though the not on the mainland. 4) The Bamar arrive from southern China over 1,000 years ago, and marginalize the Austro-Asiatics in Burma. 5) The Thai arrive from southern China less than 1,000 years ago, take over the central zone of mainland Southeast Asia, and make inroads to the west in Burma. I will hazard to guess that the Malagasy of Madagascar are Austronesians who have very little of the Austro-Asiatic element in their ancestry. I believe this is so because they were part of the leap-frog dynamic where societies were transplanted from suitable point to point by water (the Malagasy language seems to be a branch of dialects of southern Borneo!). So far I've been talking about the north to south movement. And yet the paper observes a south or north gradient in genetic diversity, which implies to the authors migration from south to north (the northern East Asian groups being a subset of the southern). But the past may have been more complex than we give it credit for. It is entirely possible that modern humans arrived in northeast Asia via a southern route, retreated south during the glaciation, and expanded north, with some groups pushing back south again. As it is, looking at how distantly the Melanesians relate to East Eurasians I think the most plausible model is that there wasn't a relatively recent expansion from Southeast Asia. Rather, the ancestors of most East Eurasians survived in refugia in China, and a sequence of agriculturally driven expansions have reshaped Southeast Asia more recently. These populations admixed with the indigenous substrate, more or less. This would have resulted in an uptake of genetic diversity. Finally, the massive expansion of Han from the Yellow river basin may have caused the extinction of many lineages across China within the past ~3,000 years. Citation: