To Keep Yourself Healthy: Brush, Floss, and Measure Your Microbes Daily?

As these plots of bacterial diversity in two subjects over a period of 16 weeks show, microbiomes vary widely among women and change radically over time.

When John Mayer sang "Your Body is a Wonderland

," he probably wasn't talking about the trillions of microbes that live all over your skin and inside every orifice you have to offer---but it does pretty much describe things. In the last decade or so, scientists have confirmed that we're just as much an ecosystem as a rainforest is: full of ecological niches inhabited by countless bacteria, many of which have been evolving with us for millions of years. Our tiny passengers aren't passive, either. Studies in mice and some in humans have linked these microbial populations, or microbiomes, to the host's digestion, gut health, behavior, and even mood

and prevents invasion by microbes that mean us harm

. But what is a healthy microbiome, exactly? That's an important question, since diagnosing and treating illnesses related to microbiome imbalance requires some definition of normal. In the first few studies to try to address this question, scientists have found that there are some patterns: one study suggested that there could be three gut microbiome "types,"

similar to blood types. Since proposed treatments for microbiome problems include "transfusions" of bacteria from a healthy microbiome (including "fecal transplants

"), this is an attractive analogy. But a new study on the human vaginal microbiome suggests that the real story might be much more complicated. Studies exploring a healthy micobiome often look at a single sample from each person. But it turns out if you sample someone regularly, at least in the case of the vagina, you can watch the entire microbiome change radically---to the point of becoming unrecognizable---in a matter of days

. Here's the basic story: In a previous study, this team found there were five rough vaginal microbiome types present across a sample of hundreds of women

, and that certain types correlated with race. In this study of 32 women, sampled twice weekly for 16 weeks, those types still generally held, but some women swung wildly from type to type, while others never changed. Sometimes it was clear what the triggers were: menstruation could cause the entire microbiome to change, as could sex. Sometimes, it wasn't. To make matters more complicated, the microbiome as a whole kept pumping out roughly the same amounts of the same molecules---lactic acid, for example, which keeps the vagina acidic and wards off new, invading bacteria---even while the microbial make-up of the population completely turned over. 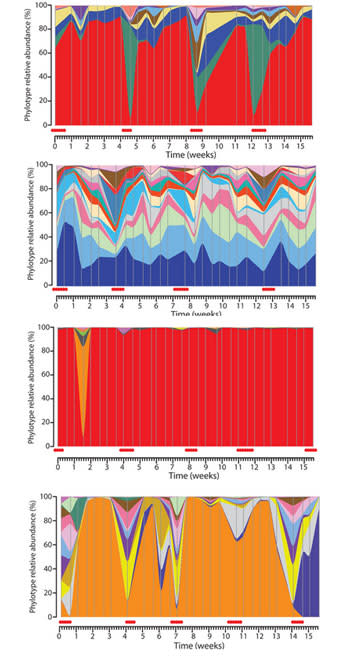 These four vaginal microbiomes could not be more different, both in terms of the variety of the bacteria and their tendencies to change over time. Each color is a different strain of bacteria. (Red strips indicate menses.)

This finding could have implications for the future of women's health. Doctors have generally been operating on the principle that vaginal infections are identifiable by an overgrowth of Gram-negative bacteria

. But a good portion of these women had exactly that kind of bacterial profile at some points yet were perfectly healthy. And it's clear that monitoring the bacteria's production of molecules like lactic acid could be just as important as surveying what's there, in terms of assessing health. With the clarity that comes with better technology, we're now seeing that the dynamics of infectious disease are more complicated than we thought. To understand these dynamics, and learn how to use them to maintain health, we're going to have to adjust how we're learning about microbiomes. These populations are changing in real time, and looking at one or two samples from each subject won't catch what's happening. Instead, we should get hi-def, time-resolved data from individuals, and use that information to classify people into microbiome types that could eventually help doctors provide more directed and effective treatment. (The vaginal microbiome, thanks to hormone cycles, might reasonably be assumed to be more variable than other microbiomes, like those in the gut or on the skin, but multiple samples over time would be a good best-practices approach for studying those too.) These subtypes might be hard to see at first, since they'll have incorporate microbiomes' changeability, but they could be very helpful in medicine. Tracking down the subtypes of breast cancer, for instance, has revealed 10 different versions

of the disease that respond to treatment differently. A couple of months ago, geneticist Michael Snyder published a study in which he analyzed biomarkers in his own blood and other fluids over a period of months and was able to catch his body in the act of developing type 2 diabetes

. If, as this vaginal microbiome study suggests, what's normal varies greatly between people, and over time in the same person, maybe that's the wave of the future. We came to this party expecting snapshots of the microbiome would be enough, at least to start. Now it looks like it would be better to have a slideshow.