To gain pallor is easier than losing it 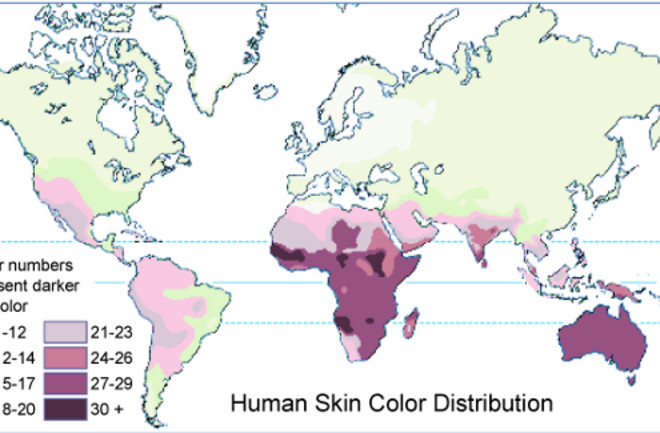 John Hawks illustrates what can be gained at the intersection of old data and analysis and new knowledge, Quote: Boyd on New World pigmentation clines:

I'm using some statistics out of William Boyd's 1956 printing of Genetics and the Races of Man[1]. It gives a good accounting of blood group data known more than fifty years ago, which I'm using to illustrate my intro lectures. Meanwhile, there are some interesting passages, from the standpoint of today's knowledge of the human genome and its variation. On skin pigmentation -- this is the earliest statement I've run across of the argument that the New World pigmentation cline is shallower than the Old World cline because of the relative recency of occupation....

Looking at what was said about pigmentation generations ago is of interest because it's a trait which in many ways we have pegged. See Molecular genetics of human pigmentation diversity. Why humans vary in pigmentation in a deep ultimate sense is still an issue of some contention, but how they do so, and when the differences came about, are questions which are now modestly well understood. We know most of the genetic variants which produce between population variation. We also know that East and West Eurasians seem to have been subject to independent depigmentation events. We also know that some of the depigmentation was relatively recent, probably after the Last Glacial Maximum, and possibly as late as the advent of agriculture. On the New World cline, which is clearly shallower than that of the Old World. The chart below from Signatures of positive selection in genes associated with human skin pigmentation as revealed from analyses of single nucleotide polymorphisms is useful:

What you're seeing here are patterns of relationships by population when it comes to the select subset of genes which we know are implicated in between population variation in pigmentation. The peoples of Melanesia are arguably the darkest skinned peoples outside of Africa (and perhaps India), and interestingly they are closer to Africans than any other non-African population. But in total genome content they're more distant from Africans than other non-African populations, excluding the peoples of the New World. This disjunction between phylogenetic relationships when looking at broad swaths of the genome, as opposed to constraining the analysis to the half a dozen or so genes which specifically encode between population differences on a specific trait, is indicative of selection. In this case, probably functional constraint on the genetic architecture. From the reading I've done on skin pigmentation genetics there is an ancestral "consensus sequence" on these genes which result in dark complexions. In contrast, as has been extensively documented over the last few years there are different ways to be light skinned. In fact, the Neandertals which have been sequenced at those loci of interest also turn out to have a different genetic variant than modern humans. How to explain this? I think here we can go back to our first course in genetics in undergrad: it is easier to lose function than gain function. The best current estimate is that on the order of one million years ago our species lost its fur, and developed dark skin. And it doesn't look like we've reinvented the wheel since that time. All of the peoples termed "black" across the world, from India, to Australasia, to Africa, are dark because of that ancestral genetic innovation. In contrast, deleterious mutations which "break" the function of the genes which gave some of us an ebony complexion occur relatively frequently, and seem to have resulted in lighter skinned groups in more northerly climes. It turns out that some of the pigmentation genes which are implicated in between population variance in complexion were actually originally discovered because of their role in albinism. So how does this relate to the New World? I think the difficulty in gaining function once it has been lost explains why the people of Peru or the Amazon are not as dark skinned as those of Africa, Melanesia, or South Asia. They haven't had enough time to regain function which they lost as H. sapiens traversed northern Eurasia. So there you have it. A nice little illustration of how the genetics taught to 18 year olds can be leveraged by the insights of modern genomics and biological anthropology! In the end, nature is one. Image Credit: Dennis O'Neil