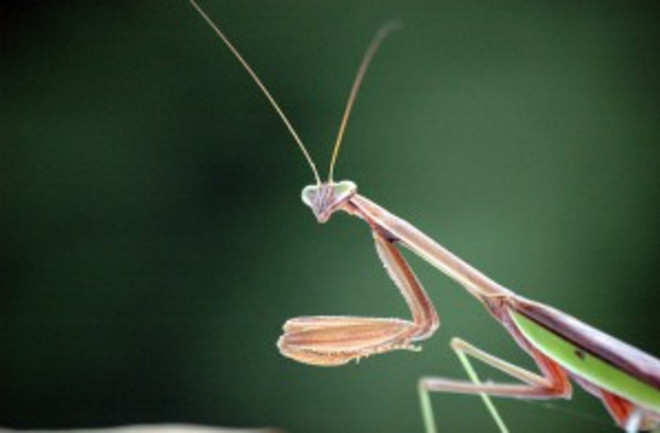 Image: Flickr/Tom HannySomehow, sexual cannibalism never seems to get old. Maybe it's the visceral image of animals eating their partners after doing the deed. Or maybe hearing about kinky sex in wild animals helps us accept our own sexual oddities. Whatever the cause of our obsession, this study adds another layer of drama to the mix. Here, scientists gave male praying mantises a choice of whom to interact with: a likely well-fed female (prey in hand), a potentially hungry female (empty-handed), or a male holding food. And, as the title suggests, the males chose the females holding food, but first waited for them to finish their snacks. A wise choice, given that females have been known to sever male heads during copulation. Gulp!Males choose to keep their heads: Preference for lower risk females in a praying mantid. "Male reproductive success is obviously mate limited, which implies that males should rarely be choosy. One extreme case of a reproductive (or mating) cost is sexual cannibalism. Recent research has proposed that male mantids (Parastagmatoptera tessellata) are choosy and not complicit in cannibalism and that they modify behavior towards females based on the risk imposed by them. Since female cannibalism depends on females' energetic state (i.e. hunger) we investigated whether male mantids are capable of using environmental cues that provide information regarding the energetic state of females to make their mate choices. Under laboratory conditions, males were confronted individually with three options: a female eating a prey, a female without a prey, and a male eating a prey (as a control for the presence of prey). Each subject comprising a choice was harnessed and placed in the corners of a triangular experimental arena at an equidistant distance from the focal male. The prey was a middle size cricket that subjects ate in approximately twenty minutes. The behavior of focal males was recorded for six hours. Females were under the same deprivation regime and, in line with previous studies, consuming one cricket did not significantly increase females' abdomen girth. Male mantids significantly preferred females that were eating a prey. In all cases choices were made after the females consumed the whole prey. This suggests that males did not use the prey as a direct way to avoid being cannibalized by keeping the female busy. The preference for females that had recently fed may have evolved because of the potential reduction in sexual cannibalism." Related content: Spiders perform female genital mutilation to ensure faithfulness.Polygamous male bustards eat poisonous beetles to rid themselves of STDs.Male spiders play dead to avoid “sexual cannibalism.”