This Taste-Related Protein May Lead to New Diabetes Treatment 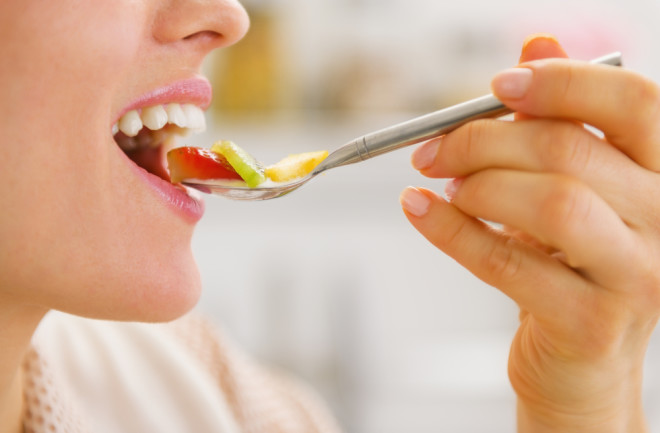 The term “transient receptor potential melastatin 5” doesn’t exactly roll off the tongue, but if you’ve ever enjoyed the sweet taste of a ripe nectarine or the umami flavor in your mu shoo pork, you have this taste-signaling protein to thank.

Now researchers are taking a closer look at this structure — called TRPM5 for short — and with the help of some higher resolution images, have a better understanding of its inner workings. Their findings could lead to additional treatment options for conditions such as diabetes and the development of a better low-calorie sweetener.

A team of Van Andel Institute scientists are conducting this research, achieving the high resolution imagery with the help of cryo-electron microscopy. Scientists have known about the roles this protein plays in the body from taste perception in the tongue, sensing blood sugar levels in the pancreas and even aiding in the battle of parasites in the small intestine, but the structure is so small that roughly 5,000 of them could fit across the width of a human hair. Getting a clear image has been a challenge.

“People used to call it 'blobology' because you could not see any atomic details,” says Juan Du who is leading the TRPM5 research team alongside her husband Wei Lu. “But now using this technology you can see the anatomic details of this protein structure.”

For example, the scientists knew calcium was key to the protein’s function but only knew of one bonding site for the ion. Through their research they were able to find an additional calcium site no one else knew about.

“Not only can we see protein on the nanometer scale, we actually can see ions bond to the protein,” says Lu. “Knowing where calcium binds and what happens when calcium binds is fundamental to our understanding of how TRPM5 works at the atomic level.”

TRPM5 comes from a family of eight proteins that respond to different stimuli such as temperature, pressure or pain. For example, TRPM8 is responsible for signaling cold sensations to the brain while TRPM3 alerts its host to noxious heat — such as when touching something hot, Lu says. In addition to TRPM5, the couple’s lab has also solved the structure for TRPM4 which is a related taste-signaling protein to TRPM5 and TRPM2 which is responsible for signaling heat due to a fever. “It’s a very interesting family of proteins,” says Lu.

In addition to the secondary calcium binding site on TRPM5, the researchers also uncovered a site that could be used to bind drugs to the protein. This is what could lead to a diabetes treatment if researchers can find the right small-molecule compounds to enhance the natural function of the TRPM5 protein. That is, promoting insulin secretion. Ideally it would do this without affecting other proteins which could lead to side effects, notes Lu. The research team has partnered with a pharmaceutical company to explore these options.

An artificial sweetener born out of this research would be unlike current options because it would attempt to appease both the flavor-flagging TRPM5 proteins in the tongue while also addressing the TRPM5 proteins that live in the gut.

“I think all the artificial sugars now on the market only satisfy your tongue but it cannot satisfy your intestine,” says Du. As a result, consuming many fake sugars available today may actually leave you hungrier and cause you to overeat, Du added. While this new hypothetical sugar wouldn’t provide energy like real sugar does it would trick the body into thinking it was receiving it. “You will not gain energy from that but it will make you feel that you gain energy,” says Du. “Satisfy your stomach and your intestine.”

Losing your sense of taste is one of the more bizarre yet somewhat common symptoms of COVID-19, however the researchers say there doesn’t seem to be a link between that and the TRPM5 protein function. Still, Du notes that the symptom has highlighted an appreciation for the sense many of us might take for granted.

“Even though there’s no direct correlation between COVID and TRPM5 in what we are studying, I think because the patients (lose) their taste and smell due to COVID people start to appreciate how important it is,” says Du. “How we can use the taste to appreciate the different flavors of food.”