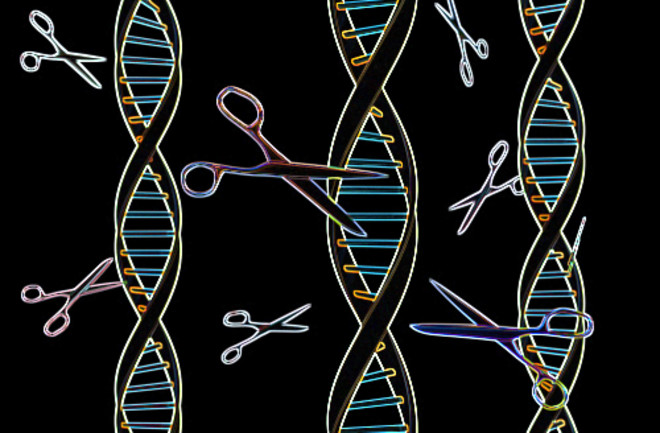 The popular gene-editing tool CRISPR works by cutting out genes. A new genetic tool instead works by searching for and replacing targeted genes, without breaking DNA. (Credit: Steven McDowell/Shutterstock)

Snip, snip. If you’ve been paying attention to the hubbub about gene editing, the first image that pops into your head might be of a pair of scissors. Today, when scientists use the popular gene-editing tool CRISPR, they’re essentially slicing through both strands of the iconic double helix with molecular shears before splicing in a new gene and allowing the cell to recover.

But the revolutionary CRISPR-Cas9 system has its limitations. These double-stranded breaks in DNA can create an uncontrolled, unwanted cocktail of insertions and deletions. And scientists think that they may actually disrupt how the edited gene functions. Beyond that, the approach isn’t that efficient at correcting most types of mutations — which can cause an array of genetic diseases — with precision.

CRISPR isn’t the only widely used method for genome editing, either. In 2016, researchers developed an approach called “base editing,” which directly converts one letter of DNA into another without hacking through the double helix. If the CRISPR approach is like using a pair of scissors, base editing is more comparable to using a pencil. Yet even it is incapable of making exact insertions or deletions, like those needed to correct the extra or missing DNA letters that give rise to Tay-Sachs disease or cystic fibrosis.

Now, researchers at Harvard University and MIT’s Broad Institute have developed a new approach that they say is more like a word processor’s “search-and-replace” tool. Scientists say the method, published Monday in Nature, is the first form of gene editing able to make insertions or deletions in human cells without breaking the double helix.

To date, there are over 750,000 changes that can arise in human DNA associated with genetic diseases. Sickle cell anemia, for example, is caused when a specific “A” base pair mutates into a “T” in the gene that encodes hemoglobin, which supplies cells with oxygen.

This buffet of genetic diversity sits in stark contrast to the relatively few available agents for gene editing. David Liu, the study’s lead author and a researcher at the Broad Institute, says the novel approach — known as prime editing —  uses a lab-made protein and a “guide” RNA molecule.

Together, the engineered macromolecules perform a series of steps that targets, writes and repairs DNA to achieve the desired edit. The end result is a permanent edit that replaces the original DNA sequence on both sides of the double helix.

In the initial study, the scientists reported more than 175 edits in human cells using prime editors — including correcting the genetic causes of sickle cell and Tay-Sachs disease. They also found the approach results in far fewer “off-target” edits than the CRISPR-Cas9 system, which sometimes cuts genes in places it’s not supposed to.

But the researchers say they won’t be completely eschewing other methods in favor of prime editing. They anticipate that all three types of editing agents will play different — and sometimes supporting — roles in basic research.

“(The CRISPR method), base editors and prime editors each have complementary strengths and weaknesses,” said Liu in a press briefing. “Just as scissors, pencils and word processors each have unique and useful roles.”

Liu also added the caveat that they’re still in the early stages of testing this model. “This is the beginning of a long-standing aspiration in the molecular sciences to make any DNA change (within) an organism,” he said. “Much more work, of course, is needed to fully realize this goal.”