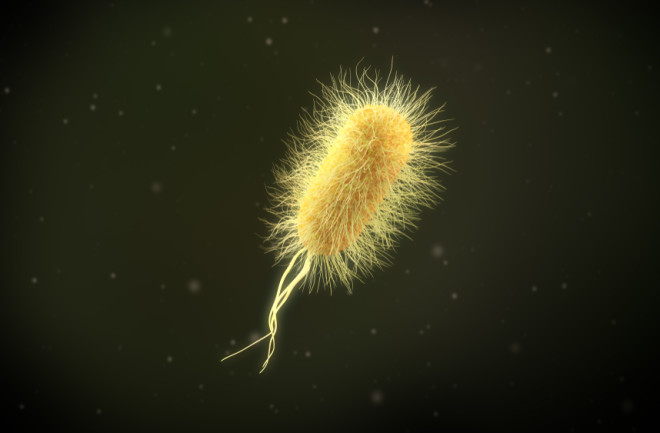 The bacterium Escherichia coli, illustrated here, moves itself with propeller-like structures called flagella; it is one of the mobile microbes scientists have linked to cargo-carrying structures to form biohybrid microrobots. (Credit: supergalactic/Shutterstock)

In the universe of TV’s Doctor Who, the scariest adversaries of all are the hybrid robot-organic life-forms known as the Daleks.

Each Dalek is a living being encased in a robotic shell equipped with lethal weaponry, frequently employed to terrify London, other cities or entire planets. But if you think that’s scary, now imagine nanoDaleks, too small to see, scurrying around inside your body, each of them chanting “Exterminate!”

It’s not entirely far-fetched. Earth-based scientists in the here and now are developing something strikingly similar. But the idea is not to invade and conquer — rather to cure or heal.

Instead of Doctor Who, this enterprise envisions something more like a real-life version of Fantastic Voyage, the 1966 movie novelized by Isaac Asimov. In that story scientists shrank a submarine (with people inside) to the size of a microbe, enabling the humans to travel into the brain of a scientist with a life-threatening blood clot. In today’s version of this tale, scientists are combining living microbes (very small to begin with, no need for shrinking) with an additional cargo-carrying apparatus. These “hybrid biological microrobots” could deliver disease-fighting drugs, attack tumors or perform other helpful functions.

Doctors will not be deploying hybrid microrobot armies into anybody’s body anytime soon. Researchers will need to circumvent numerous technical obstacles before microbots become standard operating procedure. But neither is the prospect entirely hypothetical. Already researchers have designed and built several versions of hybrid microrobots capable of navigating the cellular world.

“Over the past decade, various microorganisms and artificial carriers have been integrated to develop unique biohybrid microrobots that can swim or crawl inside the body,” Yunus Alapan and colleagues write in the current Annual Review of Control, Robotics, and Autonomous Systems.

Experiments in test tubes, lab dishes or animals have shown, for example, that biohybrid bots can be steered by magnetic fields, light pulses or the chemical properties of their surroundings to deliver drugs to desired locations. Such mobile hybrids could also manipulate cellular interactions or generate heat to induce other medically beneficial effects.

All hybrid bot approaches have in common the idea of combining a mobile microbe — one that can crawl or swim — with a structure that can carry cargo such as drugs or do other jobs. But unlike Daleks, which all look pretty much alike, hybrid microrobots can be built from a diverse repertoire of mobile microorganisms. Researchers have also engineered a library of artificial carriers made from different materials, with different sizes and shapes, that can hook up with the microorganisms without killing them.

Such diversity is necessary because no one type of microbot would be suitable for all purposes.

“There is no single recipe for developing the ideal biohybrid microrobot, since the required performance and functionality are highly dependent on the specific application,” write Alapan and coauthors, from the Max Planck Institute for Intelligent Systems in Stuttgart, Germany.

Researchers have investigated various designs and fabrication methods for attaching microbes to a cargo carrier. In one approach, natural electric charges can bind the two electrostatically; the bacterium Serratia marcescens, for instance, carries a positive charge enabling it to bond to a carrier made from negatively charged polystyrene plastic particles.

Biohybrid microrobots combine mobile microorganisms with carrier structures to deliver drugs or perform other useful functions in the body. Researchers are exploring the use of multiple different microbes for propulsion and various types of cargo-carrying structures; success requires finding effective methods for integrating the microbe with the carrier and effective methods of steering the hybrid bot, such as with magnetic fields, light pulses or chemical signals in the bot’s environment.

All such designs exploit the ability of microorganisms, such as bacteria or algae, to swim or crawl through biological environments. These microbes self-propel by consuming chemical energy from their surroundings to drive “molecular motors.” Bacteria swim toward food, for instance, by way of molecular machinery that rotates propeller-like protrusions known as flagella. A different form of flagellar motion drives sperm on their quest to fertilize eggs. Other microorganisms travel using amoeboid movement, driven by flexing of their cellular skeletons, built from the protein actin. As its skeleton flexes, protrusions from a cell’s membrane latch on to surrounding surfaces to pull itself forward.

Mobile microbes are ideal for bot propulsion for several reasons. They can move rapidly through the body, have the ability to interact with the body’s cells, and are small enough to work their way through the body’s smallest passageways, such as capillaries in the circulatory system. A deformable microbot made from E. coli attached to red blood cells that have been evacuated and loaded with cargo can squeeze through passages smaller than the bot itself, one study has shown.

From a daily-life perspective, bot propulsion might seem slow. E. coli’s swimming speed through water is about half a mile per year (and perhaps not that fast in biological fluids). Some white blood cells crawl at more like a mile per century. But within their own microscopic Olympics, such speeds are impressive. E. coli can traverse 15 times its own body length per second, the equivalent of a human running the 100-meter dash in a little over three seconds, making Usain Bolt look like a turtle.

Speed is not the only issue, though. Accurate steering is also essential.

Researchers in recent years have reported rapid progress in developing effective steering strategies. A 2017 study showed success in coating spirulina, a type of cyanobacteria, with magnetic nanoparticles and then guiding it through a rat’s stomach by applying an external magnetic field. Other research has shown that white blood cells loaded with magnetic nanoparticles can be steered toward a tumor to deliver drugs. Another study showed that algae-based microbots can be guided by LED light pulses.

In some bot designs, steering relies on the microbe’s own ability to sense the chemistry of its environment. “An attractive aspect of chemical control is the availability of a wide variety of chemical signals released locally by targeted cells or tissues,” Alapan and collaborators note.

While offering many desirable features, hybrid microrobots pose formidable problems. Medical and engineering considerations must merge in a way that make the bots both reliable and safe. Cargo-carrying structures must be made of materials that do not trigger attacks from the body’s immune system, for example. For that matter, the carriers must also not be toxic to the microbes that propel them. And somehow the carriers must be disposed of safely after their job is finished. (One approach is loading the microrobot with sensors that can be activated by infrared light to generate enough heat to degrade the bot on command.)

Furthermore, it’s unlikely that any medical intervention could be successfully accomplished with a single hybrid microbot. So techniques must be devised to control and coordinate the movement and actions of entire swarms of bots.

Tom Siegfried is a science writer and editor in the Washington, DC, area. His book The Number of the Heavens, about the history of the multiverse, was published in September by Harvard University Press.