Doctors find a surprising cause for a preteen’s stomach pain and high blood pressure. 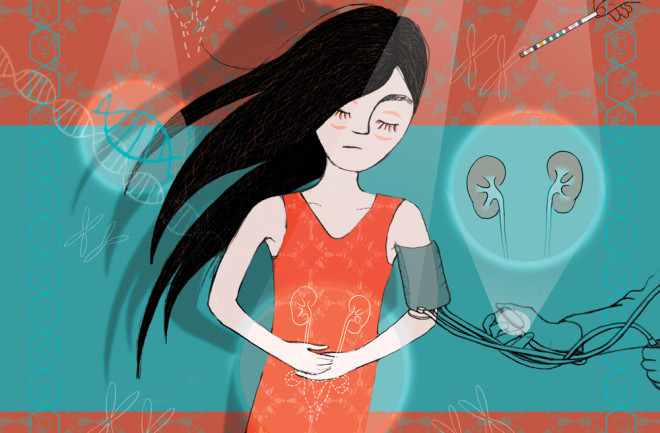 Life was changing fast for Ameera. She had moved with her family thousands of miles from the Middle East to Canada, and had just started school as a sixth-grader.

The 11-year-old was excited but also anxious, and she started to complain of stomach pain. Eventually her parents took her to their family doctor.

During the exam, the doctor discovered that Ameera’s blood pressure was higher than it should have been for her age. So, she ordered an ultrasound of her kidneys, since they help regulate blood pressure. The test revealed she had a mass near her right kidney, and she was referred to the local children’s hospital, where I and other doctors examined her.

Ameera spoke in a quiet voice. She answered most questions by nodding yes or no, as her parents sat nearby. They said that over the last few weeks, Ameera felt nauseous, had to urinate often and was often thirsty. The skin around her eyes was puffy. And Ameera’s blood pressure was indeed high, measuring 140/90. (A healthy range for her age and height is between 90/60 and 120/80.)

As she lay on her back on the exam table, I felt her abdomen and located a mass just above her right hip, toward her back. She winced when I pressed it softly. I had her sit up, then examined her kidneys by pressing at the midback, just above the hips. Everything there seemed normal.

However, her urine test showed high protein levels, which suggested nephrotic syndrome, a kidney disorder. The disorder can also cause fluid to build up around the eyes and ankles, as well as high blood pressure. It explained nearly all her symptoms, but not the mass and the pain.

Surgery was the only way to get a good look at the mass. We didn’t know if it was affecting her ovaries or bladder, so we needed a variety of specialists at the operation.

After starting the procedure, we were shocked to find that Ameera’s mass — large for her body, about the size of a plum — seemed to grow out of her right ovary.

Then another shock: Ameera had no left ovary. Instead, she had an underdeveloped ovary — merely tissue — known as a streak. She also had no uterus.

That combination of missing organs is rare, and it had implications beyond Ameera not being able to bear children: Something may have gone awry in her body’s development at the embryo stage. Now came the hard work of figuring out exactly what was ahead of us.

We took tissue samples of the kidneys and the mass. Ameera did indeed have a kidney disease, explaining her nephrotic syndrome symptoms. And the mass was a gonadoblastoma, a type of tumor that was not cancerous, but could eventually become so. We made plans to remove it in a subsequent surgery.

Such tumors are found in a few known diseases, such as Swyer syndrome, in which patients have neither ovaries nor testes, or Denys-Drash syndrome, which usually includes a specific type of kidney tumor called a Wilms tumor. She had neither of these. One other syndrome seemed quite possible, but determining whether she had it meant learning a bit more about Ameera.

So, after her surgery, we drew blood for further testing. All we could do now was wait, and hope this would finally reveal what caused her illness.

After an anxious week, we finally received the test results: an XY genotype. According to her chromosomes, Ameera was male.

Most humans have 23 sets of chromosomes, which contain genes that dictate how we develop, our appearance and many other features. One set of chromosomes determines biologic sex: XX for female or XY for male. All human embryos effectively begin as females, the default pathway for development. But early on, the presence of a Y chromosome halts formation of female reproductive organs such as the ovaries and uterus. These embryos usually develop testes and male genitalia instead — unless something occurs to stop it.

Having an XY genotype explained why Ameera’s left ovary was barely formed. It also explained why she had no uterus. And yet, her body did not produce enough male hormone to allow for formation of a male reproductive system.

It’s unclear what caused this disruption, but it led Ameera to be chromosomally male, despite her external female genitalia.

We could now finally explain Ameera’s symptoms with a single diagnosis. With the XY genotype, nephrotic syndrome and gonadoblastoma, Ameera showed the classic signs of Frasier syndrome. It’s a rare condition that affects about 1 in 100,000 live births.

In most cases, the syndrome shows up as an XY male with slightly unusual male genitalia who complains of kidney symptoms.

In girls who haven’t yet had their periods, like Ameera, the only hint of Frasier syndrome might be high blood pressure. If it’s not caught early, the condition could lead to kidney failure and transformation of the tumor to a cancer.

We removed the mass surgically, and her right ovary — which turned out to be a partially formed testis — eventually had to come out too, due to the risk of its cells turning cancerous.

Treatment of the nephrotic syndrome (namely through blood pressure measurement and water pills) and surgery were essential components of her recovery, which went well.

After the operation, we had a longer discussion with Ameera’s family. At first, they didn’t understand the diagnosis, and since she had been raised female, they were unclear as to how that might change as she matured. It was extra complicated because Ameera hailed from a traditional and conservative Middle Eastern family, where gender roles are strictly defined.

That said, her family was ready to help Ameera through the process, whatever that might entail. Her Frasier syndrome didn’t necessarily mean Ameera would identify as male, female or other, since gender is self-identified and doesn’t always correlate with biologic sex. It also didn’t necessarily confer a specific sexual orientation.

At our suggestion, her family enrolled Ameera in the hospital’s gender-focused clinic, which sees a wide variety of patients with similar conditions. That helped them navigate the landscape of gender identity, which included providing extensive psychosocial support to the family, and having conversations around hormonal therapy and potential surgeries.

For now, Ameera is a happy, healthy girl, and while she may not choose to identify as a female one day, we’ll work to keep up the “healthy” part.

Amitha Kalaichandran is a pediatrics resident doctor based in Canada. The cases described in Vital Signs are real, but names and certain details have been changed. This article originally appeared in print as "Growing Pains."

More From Discover
The Sciences
Your Body, the First 5 Minutes After You Die
Health
A Blood Test That Screens For Multiple Cancers At Once Promises To Boost Early Detection
Health
Feeling Sleepy After a Thanksgiving Meal? It Might Not Be the Turkey
Health
The Surprising History of the Bidet Started with the Wealthy and Brothels
Mind
3 Unique Ways We Can Remember The Past
The Sciences
5 Amazing Things About The Human Body
Recommendations From Our Store
My Science ShopDiscover STEM Kits
My Science ShopDiscover 2022 Calendar
My Science ShopStrange Science
My Science ShopElements Flashcards
Shop Now
Stay Curious
Join
Our List