There was scale and structure before history

Until relatively recently the spread of agriculture in Europe, and to some extent the whole world, was pigeon-holed into two maximalist models: cultural or demographic diffusionist. Neither of these models were maximalist in that they denied the impact of culture or demographics in totality, but they tended to be rhetorically brandished in a manner where it was clear which dynamic was the dominant mode of explaining the nature of cultural and genetic variation and their origins. Here are two representative headlines from the BBC: - Most European males 'descended from farmers'. - Genetic roots of Europe, "New DNA evidence suggests that a few hundred Stone Age hunter-gatherers were the ancestors of many modern day northern Europeans." For whatever reason archaeologists themselves haven't been able to resolve these issues. To me it seems that ultimately even if genetics is not determinate or even fundamentally specially insightful, it will at least sharpen the discussions, and move scholars away from arguments of rhetorical excess. One of the broader issues which I've been coming to greater consciousness of is the idea whereby all pre-literate societies were diffuse to the point of being in a state of band-level anarchy. The "demic diffusion" model to some extent seems to play into this, where simple demographic population growth due to the ability of farmers to extract more calories per unit of land allowed them to "swamp" the hunter-gatherers. This is a "low level" fundamental explanation which does not require any sort of collective complexity beyond that of the village. It is the a classic illustration of a "social physics" model of human behavior. Similarly, the cultural diffusion model often seems predicated an imitation-through-proximity, as a serial adoption of farming practices occurs through choice or necessity (as an analogy, consider the adoption of firearms). In hindsight I think the major problem with these models is that they downplay by understandable omission the higher order social complexity of institutions and identities which characterize humans. I do not believe that only with the emergence of writing did supra-band level identity emerge. This seems clear from the ethnography, and what we know from the fringes of history. The Inca for example did not have full elaborated literacy, and yet had political dominion and cultural hegemony from Ecuador to central Chile. We need to consider pots, people, and, politics, for human prehistory. Dienekes points to a very useful review in Current Anthropology, which attempts to take a more subtle and nuanced view of the data, supplemented by genetics. Westward Ho! The Spread of Agriculture from Central Europe to the Atlantic:

Recent work on the four major areas of the spread of agriculture in Neolithic western Europe has revealed that they are both chronologically and economically much more abrupt than has hitherto been envisaged. Most claims of a little agriculture in Late Mesolithic communities are shown to be incorrect. In most places, full sedentary agriculture was introduced very rapidly at the start of the Neolithic. “Transitional” economies are virtually absent. Consequently, the long-term processes of internal development from forager to farmer, so often discussed in Mesolithic-Neolithic Europe, are increasingly hard to sustain. The spread of agriculture by immigration is thus an increasingly viable explanation. The crucial role of boats for transport and of dairying for the survival of new farming settlements are both highlighted. Farming migrations were punctuated and sporadic, not a single wave of advance. Consequently, there was much genetic mixing as farming spread, so that agricultural immigrants into any region carried a majority of native European Mesolithic genes, not Near Eastern ones.

The best thing about the paper is probably its map, which is a good way to condense information for those of us who lack detailed knowledge. The dates are all years before the present: 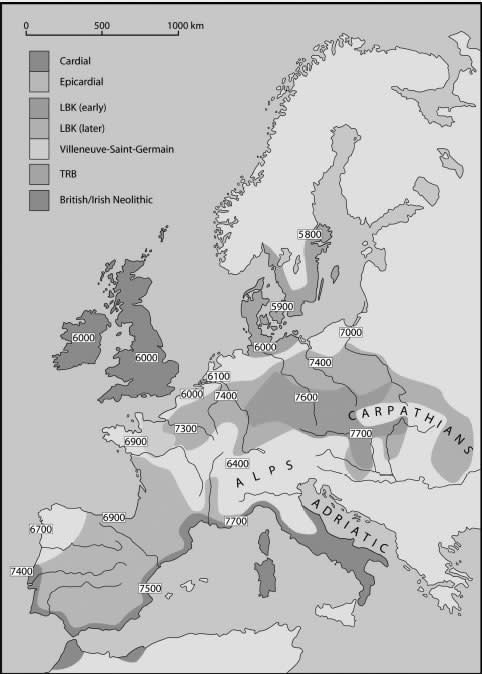 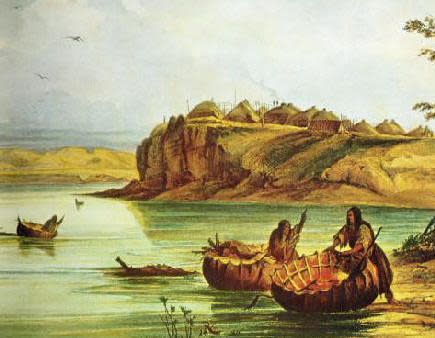 The worst thing is that the genetic references are thin and somewhat outdated. I think the genetics is now making a stronger case for disruption, confusion, and replacement, than is acknowledged in this article. A general framework which applies through the article seems to be that we must look to punctuation of cultural and demographic change as the norm, rather than the exception. The old diffusion models may be predicated on a level of smoothness and gradualism in historical and social process which are simply not feasible. There are limits to ability of biological evolution to allow for plasticity generation to generation (too much natural selection and the population may go extinct as you cull too many individuals to maintain a viable breeding population). Many of these limitations are not as strong for cultural evolution. As an example, between 3000 and 500 BCE despite all the changes Egyptian culture would have been recognizable to an individual extracted from any random moment to another. In contrast, between 500 BCE and 500 CE the culture would have shifted radically. There was arguably more change under the Ptolemies alone than over all of the native Egyptian dynasties. An explicit aspect highlighted in the argument above are the natural preconditions for cultural change and expansion. This reflects my argument that cultures can move much more easily across longitudes than latitudes, earlier made famous by Jared Diamond. The long pause of agriculture on the north European plain was partly probably the structural constraint because of the poor fit between southern crops and northern climes. But once a sufficient fit was operative did that naturally result in the rapid sweep of farmers north? Perhaps not. The colonization of the New World by European powers shows that there are strong institutional and cultural variables which may effect the nature and speed of colonization. The Roanoke Colony failed in part because there was relatively little institutional backing and support, as well as the lack of potential migrants. In the 1630s there was a massive migration of British to New England. Was this due to economics? No. It was due to the emigration of Puritans who were fleeing an Anglican Church was become more self-consciously Anglo-Catholic (I am aware that Anglo-Catholicism as we know it today is arguably a product of the Oxford Movement, but you get my drift with where Bishop Laud was going). Without writing and cultural continuity we would have no real understanding of the massive rise in numbers in the New England colonies, which guaranteed their long term ability to withstand the counter-attacks by the native populations. In other words a general understanding of the rise and spread of farming in any given region shouldn't just rely on the inevitable social forces of history, but also give some nod to the likely contingent parameters for any given specific event. The spread of farming was probably inevitable. But how it played out was subject to contingent detail. One of those details which is nicely emphasized by this piece is that water was probably the critical mode of transport for prehistoric populations expanding through "empty lands." Long distance bulk transport was only feasible by water before the rise of the railroad. The evidence from archaeological finds seems to point to the likely possibility of cultural nuclei, from which new forms and populations spread outward, filling in the "gaps." These nuclei were almost certainly likely connected by water. Think of the Greek or American colonies, which consisted of small towns surrounded by agricultural hinterlands, and unified by sea. When you re-frame expansion in such a manner it seems ludicrous to speak of a "wave of advance," whether it be demographic or cultural.