The world is as it should be in personal genomics

I've been having some fun with my daughter's personal genomics. You see, she has her whole pedigree out to r = 1/4. So, for example, contributions from her grandparents seem to be about on this order: Paternal grandfather = 0.28 Paternal grandmother = 0.22 Maternal grandfather = 0.23 Maternal grandmother = 0.27 I've also calculated the number of recombinations which occurred leading up to the gametes which fused to create her. That will be for a future post. But here let's confirm that she is not inbred. I used plink for this. Here is the description of the command:

Given a large number of SNPs, in a homogeneous sample, it is possible to calculate inbreeding coefficients (i.e. based on the observed versus expected number of homozygous genotypes). ... The estimate of F can sometimes be negative. Often this will just reflect random sampling error, but a result that is strongly negative (i.e. an individual has fewer homozygotes than one would expect by chance at the genome-wide level) can reflect other factors, e.g. sample contamination events perhaps.

My main confusion here was which population I should select? Should I select GIH (HapMap Gujaratis?) or CEU (Utah whites)? I ended up on the TSI sample (Tuscans) as a fake compromise. And of course, because she is mixed-race the results came out very negative, as she had way less homozygosity than would be "expected" from the population wide statistic. I also added an inbred friend (his parents are first cousins) as a "control." Below are two plots which show the result. 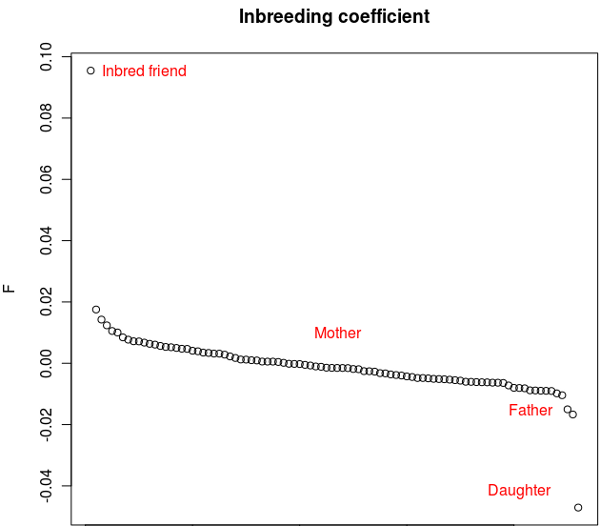 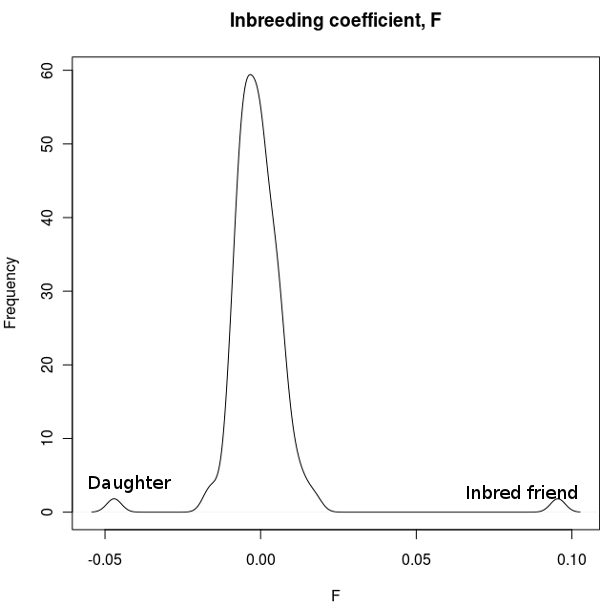 My relatively low F should not surprise. South Asians exhibit relatively high levels of total population genetic diversity as far as Eurasians go. Additionally, my recent ancestry is diverse. I have ancestors of various caste backgrounds, as well as some non-South Asians. But my daughter is definitely an outlier. Though do note that my inbred friend is further up the scale of magnitude of effect. The HapMap Tuscans are already outbred, so there's more room to go "up" than "down."