The Water Flea: A Tiny Crustacean With a Mighty Genome 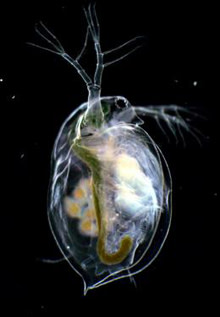 Considering the huge numbers of species that have had their DNA sequenced in the wake of the genomics revolution, it might be surprising that scientists are so excited about a tiny freshwater crustacean. But this one is special: The genome of the water flea contains a staggering 30,907 genes—the most ever seen in an animal, and about 8,000 more than humans have.

Daphnia has a large number of never-before seen genes.... "More than one-third of Daphnia's genes are undocumented in any other organism -- in other words, they are completely new to science," said Don Gilbert, coauthor and Department of Biology scientist at IU Bloomington. [Discovery News]

According John Colbourne, coauthor of the study in Science

, those never-before-seen genes are not dead weight, but rather some of the most important in the crustacean's genome for responding to changes in its environment.

Not all of the crustacean's genes are active at any given time. Rather, a large portion of them are switched on or off with changes in the flea's environment. They are "more or less environment-specific," Colbourne says. Although they are "coding for the same proteins, they're being expressed differently depending on what environmental stresses you expose the animal to." [Scientific American]

The fact that those new genes are so responsive opens the exciting possibility of poking them to see what they can do:

The crustacean can also clone itself, so ecologists will be able to expose individual genetically identical water fleas to different environmental stressors and track changes in their gene expression. "We are entering a phase where we can effectively conduct 'twin studies' — a sophisticated strategy not possible until now," says evolutionary biologist Dieter Ebert, a visiting fellow at the Institute for Advanced Study in Berlin. [Nature]

This little creature could also prove to be a useful human surrogate in scientific tests. Its sprawling genome

contains many genes that are also found in humans; in fact, it shares more genes with humans than any other arthropod known. Not bad for a water flea. And, actually, "water flea" is a misnomer. Daphnia pulex's common name comes from the fact that the translucent creature often appears deep red, like a bloodsucker. However, it's not a flea at all.

In fact, D. pulex is a filter feeder and a crustacean, not a flea, Colbourne said. The early specimens were red because of the animal's amazing ability to alter its body in response to its environment. The red water fleas weren't bloodsuckers; they were producing more hemoglobin, the protein that binds oxygen and turns blood red, because they lived in low-oxygen ponds. [LiveScience]

80beats: The Enemy Within: Deadly Viruses Show Up in Genomes of Humans & Other Animals

80beats: My Excrement, Myself: The Unique Genetics of a Person’s Gut Viruses