The virophage - a virus that infects other viruses

Viruses may cause disease but some can fall ill themselves. For the first time, a group of scientists have discovered a virus that targets other viruses. This new virus-of-viruses was discovered by Bernard La Scola and Christelle Desnues at the University of the Mediterranean, who have playfully named it Sputnik, after the Russian for "fellow traveller". It is so unique that they have classified it in an entirely new family - the "virophages" - in honour of the similarities it shares with the bacteriophage viruses that use bacteria as hosts. 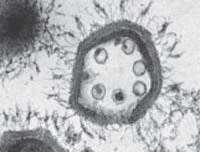 The story of Sputnik started in 1992 with some dirty English water. A group of scientists were studying an amoeba taken from a cooling tower in Bradford, England, when they discovered a microscopic giant - a virus so large that it was originally mistaken for bacterium. It was only in 2003 that La Scola and colleagues conclusively showed that the new find was indeed a virus. But what a virus - APMV, or 'mimivirus', measures a whopping 400 nanometres across.

The search for giant viruses continued. La Scola's team identified another strain of APMV by inoculating the same species of amoeba with water taken from another cooling tower, this time from Paris. The new specimen seemed to eclipse even the original giant in size, and the researchers decided to call it 'mamavirus'.

When this record-breaker infects amoebae, it forms gigantic viral factories that pump out new copies of itself. When the team looked at these under an electron microscope, they found the equivalent of microscopic Russian dolls - tiny viral particles, just 50 nanometes in size and distinct from mamavirus itself. It's all very meta, and to the researchers, the fact that mamaviruses can "get sick" themselves is further evidence that viruses are indeed living things. 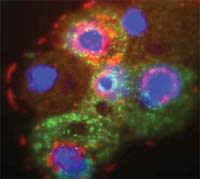 La Scola and Desnues found that Sputnik couldn't multiply within the amoeba by itself; it could only spread within cells that had also been infected with mamavirus. But Sputnik is no partner - by hijacking the mamavirus's replication machinery, it spreads at the expense of its larger host and substantially hinders its reproduction. In the presence of the tiny intruder, mamavirus particles assemble abnormally and surround themselves with unusually thick outer coats. As a result, their ability to infect the amoeba fell by 70%.

The virophage name is perhaps a bit misleading. Bacteriophages reproduce within the cells of bacteria, whereas Sputnik is a satellite virus, in more than name only. Like hepatitis D, it depends on another virus coinfecting a host in order to spread. But it's the fact that it does so at the expense of the mamavirus that makes it a true parasite.

In comparison to its sizeable host, Sputnik is tiny and sports a genome that is almost a hundred times smaller. Its 18,000 base-pairs of DNA contains just 21 genes and when La Scola and Desnues analysed these, they found that Sputnik is a genetic chimera - a mish-mash of different genes from different sources. Thirteen of these have no equivalent in any other known virus, while the remainder have similarities to genes from other viruses, bacteria and even more complex cells.

Three of these are closely related to mamavirus genes, suggesting that this tiniest of parasites has been raiding genetic material from its host and from other viruses. La Scola and Desnues even suggest that Sputnik could be acting as a genetic mule, shuffling genes between giant viruses. It could even explain why mimivirus has mysteriously and recently picked up bacterial genes of unknown origin.