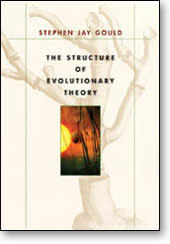 Chapters read:1, 2, 3, 4, 5, 6 and 7. So I'm reading Stephen Jay Gould's magnum opus, The Structure of Evolutionary Theory. I figure if I read this I won't have to read anything else by the guy; if he couldn't squeeze it into 1,464 pages, it really wasn't worth mentioning I'm assuming. Here are impressions from the 90 page first chapter, which is a general overview of his ideas and biography.... 1) There is the fact of evolution (descent with modification), and the mechanism of evolution promoted by Charles Darwin (gradual phyletic change operating through natural selection at the level of the individual). Gould accepts the former wholeheartedly, but he has serious reservations about the details of the latter. 2) This book is an exposition of his ideas as to how the second must be modified and elaborated to more fully describe the process of evolution. His thousand-page rejoinder is squarely aimed at correcting the overly simple narrative promoted by the putative heirs of Charles Darwin, culminating in the work of ultra-Darwinians such as Richard Dawkins. His brief is pluralistic; Gould emphasizes multiple levels of selection operating above the level of the individual, as well as non-selective parameters which are also major determinants in the shaping of the tree of life. 3) Gould has evolved quite a bit in his own views, from a sparely dogmatic naive pan-selectionist to a pluralist of baroque latitudinarian sensibilities. He considers himself part-time historian of science, and believes his scientific training as a paleontologist gives him particular insights which a pure humanist might not have. Gould also seems to fancy that he is less touched by the philistinism which is part & parcel of the outlook of most empirical scientists. 4) This last part shows, Stephen Jay Gould is well versed in the Bible, Shakespeare, and many polysyllabic & obscure words (confute?). He is also an connoisseur of high art & architecture. He likes baseball too (but you knew that!). 5) Periods are less important than commas. Update: I'm an inspiration yo!