The Sixth Sense You Didn't Know You Had

The eyes have it. 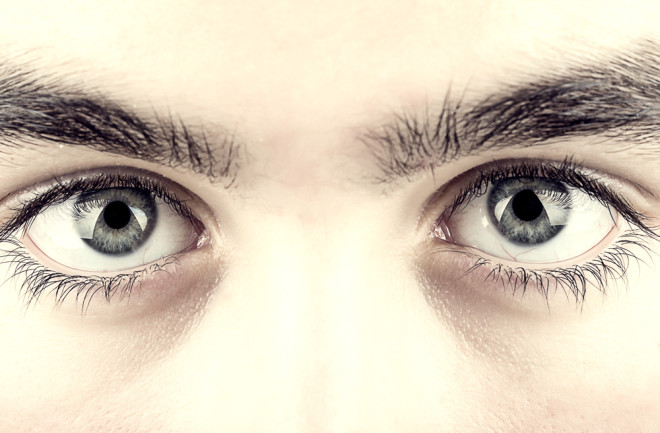 Ever fancied having a superpower? Something you can call upon when you need it, to hand you extra information about the world? OK, it’s not X-ray vision, but your eyes do have abilities that you might not be aware of.

We are all familiar with color and brightness, but there is a third property of light: “polarization,” which tells us the orientation in which light waves are oscillating. Animals, like bees and ants, use the polarization patterns in the sky as a navigation aid. But few people, even in the scientific community, are aware that humans can sense the polarization of light with the naked eye.

In research we’ve just published in Proceedings of the Royal Society B, we used an experiment that was originally designed to test the visual abilities of octopuses and cuttlefish to investigate our human ability to perceive this polarized light.

Imagine a jump rope is a light wave traveling through space. If you move the rope from side to side, the wave you make is horizontally polarized. But if you shake it up and down you create a vertically polarized wave. Generally, light is a mixture of polarizations, but sometimes — for example in parts of the sky, on your computer screen and in reflections from water or glass — a large percentage of the waves are oscillating in the same orientation. This light is described as being strongly polarized.

So if polarized light is actually pretty common outdoors, in your home and in your office — how come you didn’t notice anything special before now?

Humans perceive polarized light using “Haidinger’s brushes,” a subtle visual effect which appears like a yellow bow-tie at right angles to the polarization angle. You may also see a bluish bow-tie at right angles to the yellow one. The effect originates within the eye itself and is not an image of a real external object, so Haidinger’s brushes usually fade in a couple of seconds as your brain processes them out. This is one of the reasons that few people notice them day-to-day, and why they have previously been fairly difficult to study.

By using LCD screens capable of constantly refreshing the effect, we were able to make the first measurements of the dynamics of Haidinger’s brushes, confirming the prediction that some individuals would perceive the orientation of the bow-tie to “flip-flop” as the polarization angle is rotated.

Our results show that your cornea can dramatically affect how you perceive polarized light. As the optical properties of the cornea vary between individuals, this may also explain why people often report their experience of seeing Haidinger’s brushes differently.

To see Haidinger’s brushes for yourself, look at a blank white portion of an LCD screen on a computer, tablet or phone. Tilt your head from side to side and faint yellow and blue bow-ties, slightly larger than your thumb, should become visible. With practice, you can then see them in the blue parts of the sky at 90 degrees from the sun, particularly at sunrise and sunset.

Skylight polarization patterns, caused by light scattering in the atmosphere, are such that the long axis of the yellow bow-tie will point approximately towards the sun.

In previous studies LCD screens have been used to test polarization sense in aquatic organisms. Our study tested the limits of human polarization sensitivity, developing special filters to vary the percentage of polarized light reaching the eye from 0% to 100%.

The ability to see Haidinger’s brushes is caused by circularly symmetric organization of carotenoid pigments in the macula (an area that covers and protects the central part of the retina). Blue light which is oscillating parallel to these pigment molecules is strongly absorbed. White light, which is depleted in blue, appears yellow, which explains the yellow bow-tie effect. The blue parts of the brushes are thought to be generated by the brain in response to the unexpected presence of yellow.

Might it be possible to use our polarization powers for good? The risk of acquiring age-related macular degeneration has previously been associated with low carotenoid pigment density in the macula.

AMD is currently the leading cause of blindness in the developed world, and finding an early stage diagnostic indicator of it before any actual sight loss is incurred is a research priority. It is our hope that polarization sensitivity could be used to investigate and ultimately monitor any changes in the organization of the pigments happening in the early stages of this degenerative eye condition. More work is needed to assess the medical potential of these kinds of tests.

Haidinger’s brushes also provide a demonstration of the physics of light and the anatomy of the human eye. By taking the polaroid layer off an old LCD screen you can make your own simplified version of our test; black and white letters turn into contrasting polarization angles once the polarizing film is removed.

At a recent science festival I tried to get people to take an “octopus eye test” by reading the hidden letters using their polarization sensitivity alone. It went over well, except with one little boy, who was terrified of the accompanying octopus headdress. Time to work on a less intimidating super-costume.

Juliette McGregor is a Research Associate at the University of Leicester. This article was originally published on The Conversation. Read the original article.