The Secret to Why French Fries Smell So Good: Ironing Boards? 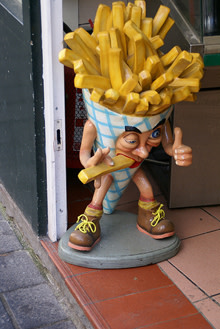 What's so enticing about those French fries cooking around the corner? New research from England finds that the aroma of fries is actually a complex combination of scents including butterscotch, cocoa, onion, flowers, cheese and, yes, ironing boards. Commissioned by—seriously—the Potato Council for National Chip Week, the researchers used an "aroma-meter" (technically a gas chromatograph-mass spectrometer) to separate the aroma into its individual compounds, which were then analyzed and recorded. A new aroma profile was not all the scientists found. The more the chips—ahem, "fries"—were cooked, the more complex they found the aroma to be: Twice-cooked fries often turned up three times the number of "aromatic notes" as batches cooked merely once. No word yet on whether this effect continues for subsequent fryings. Meanwhile, an aromatic mystery on the other side of The Pond has also been solved: A strange smell that has been wafting around and mystifying New Yorkers since October, 2005—at times even flooding the city’s public information phone lines—has been traced to a plant in New Jersey that processes fenugreek seeds to produce flavors and fragrances. As if New Yorkers needed another reason to hate Jersey. Related Content: DISCOVER: Smell Your Way to Happiness DISCOVER: The Biology of . . . Truffles Image: Flickr / jetheriot