The Seasons Are Changing and So Is Your Brain

Some parts of the human brain shrink as the weather turns colder and days grow shorter. But don't panic — scientists have a few theories why. 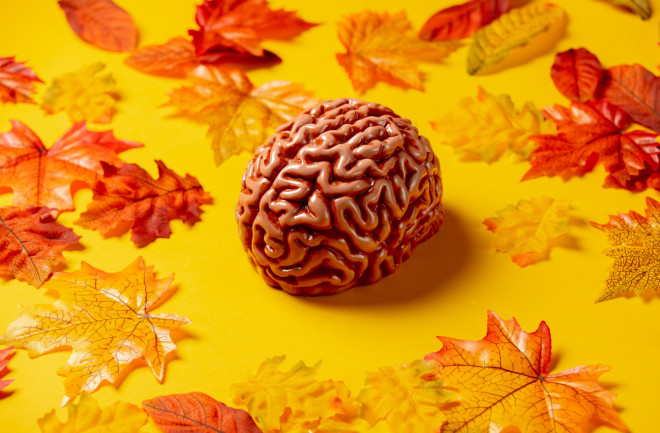 Fall is here, which means cozy sweaters, bright foliage and... shrinking brains? The human brain is remarkably adaptable, but few studies demonstrate this better than new research exploring how the brain might change from season to season.

Scientists have long believed the brain is vulnerable to seasonal shifts. For instance, headaches are more frequent in the fall and spring, mental health may decline during winter, and some symptoms of brain diseases such as multiple sclerosis vary with the seasons. Cognition also ebbs and flows throughout the year — even healthy people perform worse in the winter on tests for everyday brain functions like concentration and memory.

It stands to reason that taking a peek inside the brain as the seasons change may help explain these phenomena — and an exploratory study conducted out of the Olin Neuropsychiatry Research Center in Hartford, Connecticut, sought to do just that.

Sizing Up the Brain

The research center, situated near sea level and experiencing four distinct seasons, proved ideal for investigating seasonal effects on the brain. Researchers there examined brain scans of more than 3,000 healthy people collected over 15 years to observe what changes might occur naturally throughout the year. They collected scans through magnetic resonance imaging, known as MRI, which uses magnetic fields and radio waves to form pictures from throughout the brain. These images can provide valuable information about the brain’s distinct regions, including their relative sizes.

They found that brain size changes seasonally, but not all parts of the brain change in the same way. In fact, several brain regions become smaller during summer and larger during winter. These include areas deep within the brain — called subcortical structures — that control complex functions like learning, motivation, decision-making, and emotional and sensory processing.

Conversely, one brain region showed an opposite seasonal effect; the cerebellum, Latin for “little brain,” grew larger in summer and smaller in winter. It’s a fitting name, given that it may be shrinking even now as you read this story. The cerebellum coordinates the fluidity of complex movements required for hitting a baseball or moving a chess piece, along with other cognitive roles.

So, what do these seasonal brain changes mean? Does size really matter? The answer is complicated.

Generally, a larger brain allows a more extensive brain cell network and better processing power for complex cognitive functions. This is apparent across species — small-brained mammals, like rodents, have less cognitive abilities than large-brained mammals, like elephants. And this may also be true for humans. Several studies suggest that larger brain volume correlates to higher IQ and better cognitive performance for functions like logic, memory and reaction speed.

Seasonal brain resizing certainly could have functional consequences, explaining the existing evidence of reduced cognition in winter. But if size were everything, big-brained mammals like elephants would be more intelligent than humans. Instead, it seems that brain structure, how the brain cells are arranged and connected, for example, is more valuable.

Unfortunately, the underlying cause of these seasonal changes is still unclear. (No, it’s probably not due to pumpkin spice lattes or stressful holiday gatherings.) But Gregory Book, a biomedical engineer and lead researcher of the recent study, has some theories.

One possibility is that blood flow throughout the brain may fluctuate with atmospheric pressure, which is typically lower in summer and higher in winter. Pressure changes affect oxygen availability in the air, requiring the body to adjust blood flow into the brain, thus changing its size. Supporting this idea, Book also found similar brain volume fluctuations from weather-related pressure changes.

Though this may be part of the reason, Book notes that “this does not explain why the cerebellum follows a different pattern from the rest of the brain.” That is, the entire brain should expand or shrink together if pressure changes alone were the culprit. Alternatively, Book suggests the possibility of a vestigial reflex for these seasonal changes — an ancestral remnant of a once-essential function, like the now unneeded goosebumps that pop up when you’re cold.

“This is plausible,” he explains, “because the cerebellum in our study showed the largest changes, and it is the evolutionarily oldest part of the human brain.” In fact, this is not the first report of seasonal brain changes in the animal kingdom, and more answers might lie in previous studies documenting similar effects in another, subjectively cuter mammal.

Over 70 years ago, Polish zoologist August Dehnel observed that shrews have smaller bodies and heads in winter, returning to standard size in summer. Dehnel’s phenomenon, named after its discoverer, is not a simple proportional resizing. Instead, each organ, including the brain, shows a distinct response. This seasonal effect continues to puzzle scientists even today, but new research from the Max Planck Institute of Animal Behavior sheds more light.

The study, led by behavioral ecologist Dina Dechmann, compiled all existing data on this phenomenon to better understand how seasons influence shrew brain reorganization. She found that the brain shrinks by 13 percent in preparation for winter and regrows by 10 percent in spring. Interestingly, like the seasonal human brain changes, not all brain regions respond similarly. “Brain regions behave almost independently of each other, some shrinking and growing, some just shrinking or not changing at all,” Dechmann says. And like the human findings, these effects are intimately tied to climate and seasonal shifts.

Why does this seasonal adaptability exist? Well, the brain is a powerful organ that has high energy demands. Dechmann theorizes that shrews may shrink in fall to save energy for winter’s scarce food supplies — noting that “reducing the energetically costly brain may help.”

Perhaps the mammalian brain changes with the seasons as a survival tactic, sacrificing some brain functionality to do so. And though humans aren’t foraging in the wild anymore, this seasonal adaptation may still be evolutionarily hardwired. Despite these similarities, however, shrews and humans are vastly different and there is still much more to learn.