The Science of Sniffing Out Liars

An interrogation expert spills his secrets. 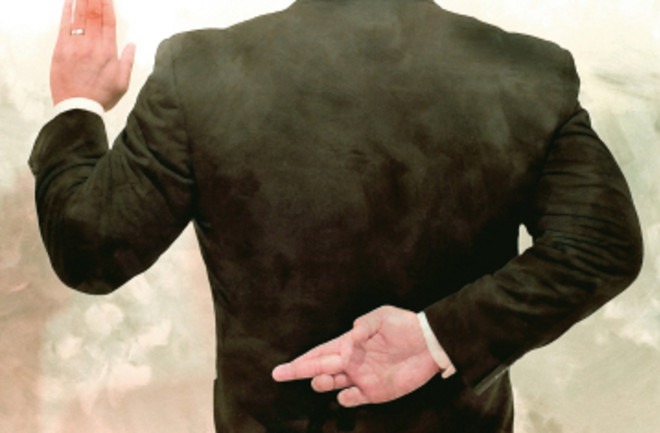 Armed with a doctorate in physiological psychology, Eric Haseltine has explored the boundaries of perception and illusion in commercial projects ranging from flight simulators for Hughes Aircraft to virtual reality and special effects for Disney theme parks. After the events of 9/11, he became engaged in the study of a different kind of illusion: the shadowy world of international espionage. He headed research and development for the National Security Agency in 2002, and in 2006 he was named associate director for science and technology for the Office of the Director of National Intelligence. One of his responsibilities involved research on how to extract information from people during interrogation and how to determine whether the information is valid. Now an independent contractor who calls himself a “technology futurist,” Haseltine divulges as much as he can about deception detection.

Can science help us determine if someone is deceiving us? The very high-tech stuff we rely on includes functional magnetic resonance imaging, magnetic encephalography, and some very, very sophisticated electroencephalography—one of the techniques used to test so-called guilty knowledge. That’s where you expose somebody to something and they have guilty knowledge—they’ve seen it before, let’s say. You can tell by looking at their brain response, up to a point, whether their brain has seen that thing or not. You say, well, do you know X, or have you seen X, and they say no, but their brain says otherwise.

Other work is trying to make traditional polygraphy better by using, for example, algorithms instead of humans to look at what’s coming in on the needle. The polygrapher, who is only human, can have a positive or negative bias about the subject that will color the interpretation of what’s on the needles, so there is a lot of work to make it objective. Algorithms can do a better job of telling if there is a good physiological response, but it’s still a big leap to telling whether the person is lying. It’s still in the basic research phase and far from being something that I would feel comfortable relying on, especially when it gets into the issue of cross-cultural communications. And there are other factors that we don’t completely understand. For example, the kind of person you worry about the most is one who has what we call antisocial personality disorder [a person who is indifferent to the needs of others]. Those people seem to have low guilt and anxiety. Do they have the same physiological response as someone who is “normal”? Yes and no. Lying requires a mental workload, which, according to some scientists, drives up the blood pressure and heart rate regardless of your emotional state, and so there may be some similarities and there may not be. Those are questions that require more investigation. So I personally would not put a lot of stock in any of these measures, including polygraphy per se.

We now get into the category of things that I would call low tech, which I think have a fair amount of validity. For example, Paul Ekman looks at microexpressions as evidence of what you’re really feeling. What he feels is that when you are suppressing things, things leak out in microbursts. If someone says, “Gee, I really am saddened by the death of my wife” and a microexpression shows that he is happy or contemptuous, then it would give you pause. By itself, I wouldn’t call it lie detection. But it does give you information that would either support or not support the hypothesis of deception.

What are interrogators told to look for? There isn’t a lot of behavioral research data about which particular techniques are most effective. There was a Luftwaffe [German air force] corporal who was legendary in World War II for interrogating. His name was Hanns Scharff. He spoke flawless English. He was an incredibly gentle person. He was warm, he never in any way pressured interviewees, and he extracted tremendous intelligence. People who talked about being interrogated by him said they didn’t know they were being interrogated. He had an incredible memory and he never wrote anything down. So you’d be walking out in the exercise yard, smoking a cigarette with him, and he’d just be talking. And he would remember everything.

Who makes a good spy or a good liar? I don’t think there’s any one answer to that. Being a good actor, being a good poker player. Being a good con man. Con men are people who are sociopathic, who do not feel remorse, and who are very attuned, strangely, to other people and can read them very well. If I know what you really want to hear and what is in your heart of hearts, your fondest desire, because I’m good at reading you and I’m street-smart about assessing you, then I can feed you what you want to hear. A good con man does that. A good magician does that. You also have to have a good memory.

So behavioral scientists have a leg up on technology as far as interrogation goes? I think that’s right. You think of things like thermal imaging and pupil dilation, and you can look at heart rate with ultrawideband radar, and blood pressure and breathing rate and galvanic skin response—signals like sweat—and you can look at the constellation of all of these things, and they may tell you that the person is aroused or that he’s having an autonomic response. But it’s a big leap from that to “He’s lying.” I’ve undergone polygraphs, and I will tell you it’s a very stressful experience. And some people react very differently to stress than others without being liars at all.

Does torture work as a method of extracting the truth? I’m going to go back to the findings of the Intelligence Science Board, a group of scientists who advised the U.S. intelligence community and studied the most effective ways to gather information in a free society. When they looked at all the techniques that are used, their conclusion is that we don’t have the behavioral science to give us the answers. As to coercive methods, I don’t think we have good information to say one way or another. [The notion that] if you’re in intense pain then you’ll break may not be true.

What is the hottest area today in deception detection? Human lie detectors. I think the low-tech training of humans to be better interpreters of information is where the most productive work is going to be. The reason being that you can either train a human to do it or train a computer to do it, and human brains are still much better computers than computers are.

Is there any technique that scares or worries you? I think it’s inevitable that with neuroscience we’re going to get to a point where, without [a person’s] cooperation, we can be pretty accurate about knowing what a person knows or feels or thinks. And so I wouldn’t say it scares me, but I would say that there are going to be some really tough issues for society to deal with [regarding] where privacy and human dignity begin and the right of the larger group to protect itself ends.

It’s kind of like the same question as: Is it okay to take the fingerprint of a criminal or a suspect? Yes. Is it okay to take their DNA? Less clear. Is it okay to find out what’s going on in their brain without their cooperation? Let’s say we can train a computer to do better than a human does looking at facial expressions and body language and everything else, right? I think that it will be possible and maybe not too far off in the future. So imagine if a computer can look at you through a camera and know whether you are suppressing information or having feelings that are not consistent with what you’re saying, and you don’t have any ability to volunteer that. I think that society has got to wrestle with that question. And I’m not saying that I’m scared, I’m saying that I’m not optimistic that there are any easy answers.