The Science of Champagne Bubbles 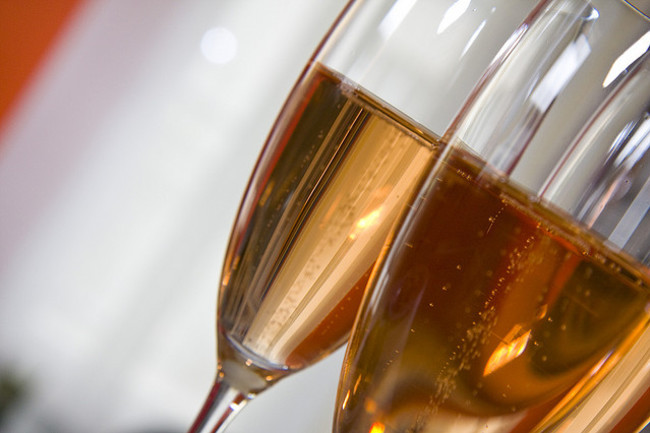 Toast the new year with a bottle of champagne! With its effervescent fizz, golden sparkle, and showy corking, it is the go-to celebratory drink. Read up on champagne making, bubble formation, and the mathematics behind bubble patterns, and get ready to show off some foodie knowledge at this winter’s new year’s party.

A sparkling wine isn't champagne unless it comes from its namesake region of France. The Champagne province in the northeast of France boasts ideal soil conditions which contribute to the grape quality, and thus the quality of the beverage that results from champagne winemaking. Champagne undergoes a two-part fermentation process. The first fermentation results in a flat champagne wine.

Next, yeast and sugar are added to this base, and the bottle is sealed. The yeast consume the sugar and produce alcohol along with about 10 grams of CO2 per liter of fluid [1]. Toward the end of production the bottle is opened, whereupon the yeast and about 80% of the CO2 are expelled from the bottle.

It may seem that allowing such a large fraction of the CO2 to escape would be undoing the yeast’s hard work, but the remaining 20% in the fluid are enough to make 20 million bubbles in one champagne flute, each no larger than a millimeter in diameter [1]. The bottle is quickly corked once again, and is then ready to be sold.

At 11:59 on December 31st, many will have a bottle in hand and will be anticipating the bang of the cork shooting out; this is caused by the buildup of pressure inside the bottle. Surprisingly, only 5% of the energy exerted during the bottle opening is the cork's kinetic energy, that is, the energy of motion that would propel the cork into your uncle’s eye.

The remaining 95% of the energy generates the popping sound's shock wave. This wave causes a mushroom cloud-like pattern of CO2 that is released when the cork pops [3]. The white fog that rises from the bottle after the mushroom cloud is a mist of ethanol and water vapor, triggered by the sudden drop in gas temperature when the bottle pressure is rapidly released Because of the speed at which this occurs, there is no time for the energy transfer—heating—to occur. The result is adiabatic cooling. The gas temperature drops, causing the water vapor in the gas to condense [3].

Natural Effervescence — Champagne fizz has a rather surprising source. It is caused by the presence of tiny cellulose fibers that cling to the glass by electrostatic forces. The fibers are deposited from the air or that have been left over after wiping the glass with a towel. Each fiber, about 100 micrometers long, develops an internal gas pocket as the glass is filled. These microfiber gas pockets are the bubble formation sites. '

To form a bubble, dissolved CO2 has to push through liquid molecules held together by very weak but abundant molecular interactions. The CO2 would not have enough energy to do this on its own, but the gas pockets held in the cellulose fibers lower the energy barrier and allow a bubble to form. CO2 continually deposits itself from the champagne into the bubble until it reaches about 10-50 micrometers [1], whereupon its buoyant force is so great that it detaches from the fiber and floats upward.

A new bubble forms immediately in its place. Artificial Nucleation — Because natural effervescence is very random and not easily controlled, glassmakers use a more reproducible way to generate bubbles. Glassmakers use a laser to engrave artificial nucleation sites at the bottom of the glass to make the effervescence pattern pleasing to the eye. They usually create no fewer than 20 scratches to create a ring shape, which produces a consistent column of rising bubbles.

Bubbling patterns actually change over the time that the champagne is within the glass. The bubbles start out as strings that rise in pairs, then gradually transition to bubbles in groups of threes, and finally settle down in a clockwork pattern of regularly spaced individual bubbles. A team of physicists in the Champagne region of France have performed extensive research to figure out the science behind champagne fizz and the interesting patterns the bubble strings form.

The patterns are determined by the vibration rate of the gas trapped at the nucleation point and the growth rate of the bubbles outside. These factors are determined by atmospheric pressure on the surface of the champagne, temperature, and the size of the nucleation point in the glass, among other factors. The Champagne team has arrived upon a complex equation to explain the differential patterns of bubble streams by relating bubble radius, oscillation frequency of the gas pocket, and the time interval between two successive bubbles [2]

where Ro is the radius of the bubble just before release, and Ti is the time interval between two successive bubbles, ω is the ratio between the oscillation frequencies of the gas pocket and the bubble (Fb), and E is related to the interactions between the two systems [2]. Now that some of the mystery behind the sparkle and pop of champagne has been explained through science, opportunities to impress friends and strike up conversation present themselves at the next big occasion.

Break out a timer and graph paper; observe one nucleation point on a glass and measure the transition time from two to three bubble patterns. Someone is bound to ask what the stop watch is for.