The Science of Bacon 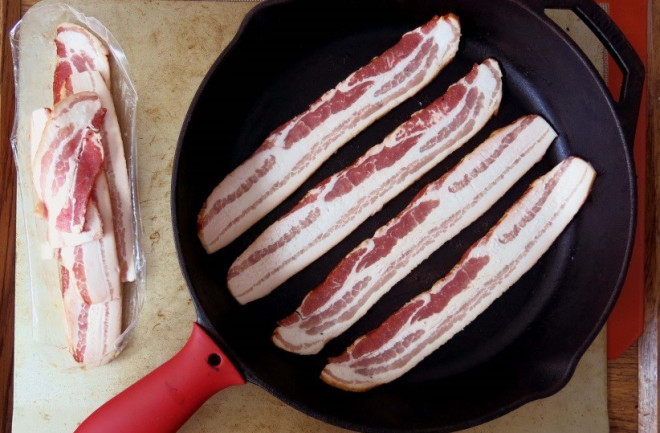 Imagine rolling out of bed on a Saturday morning, shuffling into your kitchen, and tossing a few strips of streaky bacon into a skillet. After a few minutes, you’ll hear a delightful crackling and sizzling, soon followed by a complex and savory aroma that could lure even the most resolute of vegetarians to the kitchen.

As time passes, you peek into the skillet and notice the bacon begin to brown and bubble. After an agonizing wait, the bacon has finally reached a desired color and crispness and is ready to be consumed. You eagerly bite into a strip of bacon and are met with a pleasantly smoky taste, crunch, and a melt-in-your-mouth sensation.

Bacon is a delight to eat, but it’s even better when you understand the science of why it’s so delicious. There are two major factors that can explain why bacon has such a devoted fan base, with the first and more obvious factor being its aroma. Scientists have identified over 150 compounds responsible for bacon’s distinctive smell. As bacon cooks, there are a couple of different things going on.

The Maillard reaction, the browning that results when amino acids in the bacon react with reducing sugars present in bacon fat, produces several desirable flavor compounds. This same browning reaction is also what forms the darkened and crunchy exterior on a pretzel or provides a stout beer with its characteristic color and taste. During this process, bacon fat also melts and degrades into flavor compounds of its own.

The compounds produced from the Maillard reaction and from the thermal degradation of bacon fat combine to form even more aroma compounds. In one study, scientists used gas chromatography and mass spectroscopy and revealed many of these aroma compounds to be pyridines, pyrazines, and furans, which were also found in the aroma of a fried pork loin that was tested. Pyridines, pyrazines, and furans are known to impart meaty flavors, so what actually sets bacon apart from the fried pork loin is the presence of nitrites.

Nitrites are introduced into bacon during the curing process and are believed to react with aroma compounds in such a way that dramatically increases the presence of other nitrogen-forming compounds, including those meaty pyridine and pyrazine molecules. Ultimately, we can thank the high presence of nitrogen compounds as well as the interplay of fat, protein, sugars, and heat for bacon’s savory and unique aroma [1].

Now imagine that you’re eating breakfast. You alternate between bites of fluffy pancake drenched in maple syrup and mouthfuls crispy bacon, and maybe you’ll also have a side of velvety scrambled eggs. Here, you have a variety of textures on your plate –which brings us to our next concept to explain why bacon is so revered — mouthfeel. Mouthfeel is described as the physical sensations felt in the mouth when eating certain foods. Bacon delivers a crunchy contrast to the softer textures found in scrambled eggs or pancakes in a mouthfeel phenomenon known as dynamic contrast.

The brain craves novelty, and sensory contrasts will often increase the amount of pleasure that the brain derives from food, which is why you can find bacon as a textural accompaniment in many classic, creative, or sometimes questionable combinations. In a strip of bacon, you’ll see that it consists of lean meat that is heavily marbled with fat. During the cooking process, fat renders off leaving behind a product that simultaneously crisps and melts in your mouth when consumed, a texture combination that is rivaled by few other foods. The melt-in-your-mouth phenomenon of bacon illustrates another nuance of mouthfeel, which is vanishing caloric density.

Vanishing caloric density can be blamed for why it’s so easy to mindlessly consume massive amounts of popcorn, cotton candy, or other foods that seem to melt in your mouth. Upon ingestion of these foods, it is believed that the brain is tricked into thinking that you’re eating fewer calories than you actually are. Foods with vanishing caloric density have low satiating power but high oral impact, so your brain urges you to consume more, as it finds them more rewarding [2].

Between its tantalizing aroma and its delectable mouthfeel, it’s no surprise why bacon mania has so aggressively swept the nation.

About the author: Mai Nguyen is an aspiring food scientist who received her B.S. in biochemistry from the University of Virginia. She hopes to soon escape the bench in pursuit of a more creative and fulfilling career. Read more by Mai Nguyen

More From Discover
Health
This is How Much Water You Should Actually Be Drinking Each Day
Health
What is Epilepsy and What Should We Know About it?
Health
What is Long COVID and What are the Symptoms?
Health
A Blood Test That Screens For Multiple Cancers At Once Promises To Boost Early Detection
Health
Decorate For the Holidays Early and it Might Improve Your Mood
Health
The Surprising History of the Bidet Started with the Wealthy and Brothels
Recommendations From Our Store
My Science ShopDiscover STEM Kits
My Science ShopDiscover 2022 Calendar
My Science ShopStrange Science
My Science ShopElements Flashcards
Shop Now
Stay Curious
Join
Our List