The Science Behind Why Airline Food Tastes Bad 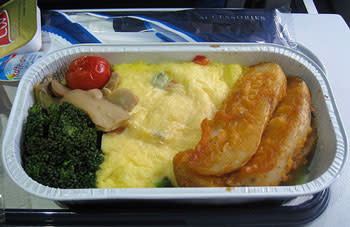 Airplane food is notoriously bad. But airlines, in financial free fall over the last decade, have been trying to bring back the luxe food of early flight in business class and first class, to lure in more high-end travelers. Biology is working against them, though. As Jad Mouawad reports

for the NYTimes, part of why plane food lacks subtlety is that we can't actually taste as well when we're at altitude:

Even before a plane takes off, the atmosphere inside the cabin dries out the nose. As the plane ascends, the change in air pressure numbs about a third of the taste buds. And as the plane reaches a cruising altitude of 35,000 feet, cabin humidity levels are kept low by design, to reduce the risk of fuselage corrosion. Soon, the nose no longer knows. Taste buds are M.I.A. Cotton mouth sets in. All of which helps explain why, for instance, a lot of tomato juice is consumed on airliners: it tastes far less acidic up in the air than it does down on the ground. It also helps explain why airlines tend to salt and spice food heavily and serve wines that are full-bodied fruit bombs. Without all that extra kick, the food would taste bland. Above the Atlantic, even a decent light Chablis would taste like lemon juice.

Astronauts also have to deal with diminished flavor on their journeys

, perhaps for similar biological reasons. After NASA's shuttle food system manager fielded copious requests for hot sauce, she began to suspect that swelling of the sinuses in zero gravity might be interfering with astronauts' ability to smell and taste; now studies are underway to mimic the effect on Earth, by having volunteers lie with their feet elevated slightly above their heads for weeks

and recording their reactions to food.