The School Nurse Shortage Is Getting Worse

The U.S. was already grappling with a deepening deficit of school nurses. Then the pandemic hit. 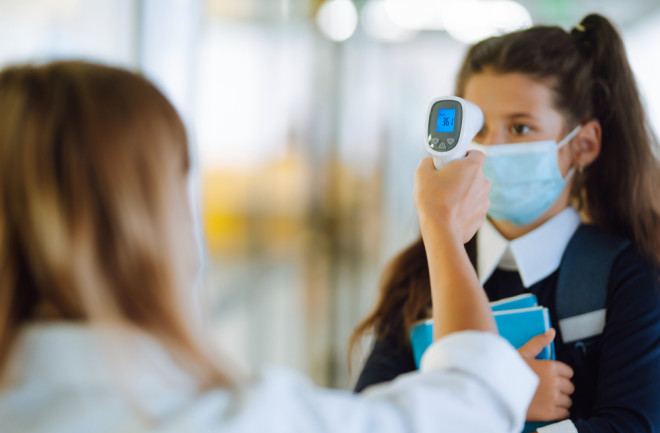 When a middle school student collapsed during gym class in 2015, the physical education teacher wasn’t sure what to do. He called the school nurse, but she was at another campus in the district. She missed the first call, but answered the second and instructed the gym teacher to call 911. The school was located in Delano, California, a small city north of Bakersfield. The call to emergency services, however, was misrouted to Canada and had to be transferred back to local authorities.

The school nurse arrived before the paramedics. About 10 minutes had passed, and the boy was still lying face down. An autopsy revealed he died of hypertrophic cardiomyopathy, a heart condition that can cause sudden cardiac arrest. In some cases, resuscitation can save the person, but no one tried chest compressions until the nurse arrived. The boys’ parents later sued the school district and settled out of court for an undisclosed amount. And an attorney on the case, Matt Clark, says he believes his clients’ son would have survived if a licensed nurse had been at the school and able to perform CPR.

The fact that the school didn't have a dedicated full-time nurse is an unfortunately common occurrence. Almost 60 percent of schools in the U.S. don't have a full-time nurse, according to a study published in The Journal of School Nursing in 2018. Of these schools, 35 percent share a part-time nurse with other schools and 25 percent do not have a nurse on campus at all.

Schools are experiencing a nursing shortage that advocates argue puts children's well-being at risk. It’s a problem that has troubled educators for more than a century, partly because schools have struggled to define the nurse’s role. But it's grown worse in recent years, with the COVID-19 pandemic adding to the confusion, and public health officials worry the crisis will only keep compounding in the years to come.

The presence of medical professionals in schools didn’t begin as a way to help sick students — initially, it was meant to keep contagious children from class. In the late 1800s, medical inspectors were hired to evaluate children in New York City schools. Students who were suspected to have an ailment were sent home with a card that explained they had an undisclosed medical condition that needed to be cured before they could return.

Critics of the policy argued that parents who could not read or speak English didn’t understand the card. And the card didn’t reveal the student's diagnosis, which left parents guessing. Simply put, these children were excluded from school, and many never returned.  At times, as many as 20 percent of students were kept from class.

Advocates in the early 1900s pushed for medical professionals in schools, not for the purpose of excluding children, but to diagnose fixable problems and give more students the opportunity to learn. In some areas, the school nurse provided the only medical attention a child was able to receive.

Still, there were shortages even then, which persisted until after the Second World War. During the war, the government actively recruited nurses and encouraged young people to enter nursing school. In September 1940, there were just 1,600 military nurses. That number soared to more than 24,000 by September 1943.

By the 1950s, school nurses were also given the role of health educator and tasked with teaching fundamentals of good diet and hygiene.  But budget cutbacks in the late 1960s and 1970s slashed education programs and diminished school nursing funds. At the same time, both educators and school nurses were learning how to include and care for children with disabilities. Beyond that, the 1980s recession brought even more cuts to school nursing programs.

Today, tightened budgets have meant that most school districts share nurses between campuses. Others offer a lower salary for full-time nurses, which makes recruitment challenging. School nurses make between $10,000 to $20,000 less than their hospital counterparts, according to a 2021 report by the Pew Research Center.

For many schools, that means there isn’t a trained medical professional on campus, or the one available is overwhelmed. In Wisconsin, there was one school nurse for every 1,173 students during the 2019-2020 school year, according to a paper from the Center for Education Data and Research still pending peer review. Plus, the number of trained professionals who could fill those open positions has continued to shrink: More than 500,000 registered nurses are slated to retire by 2022, creating a need for 1.1 million additional nurses.

The shortage comes at a time when many kids have medical ailments. About 40 percent of school-aged children have a chronic illness such as allergies, asthma, diabetes, epilepsy, or behavior/learning issues that require daily medicine, according to the Center for Disease Control and Prevention. Without a school nurse on campus, faculty and staff who lack medical training are tasked with giving insulin, administering emergency doses of epinephrine during life-threatening allergy attacks, and in rare instances, having to administer CPR.

Plus, the pandemic has added a serious wrinkle to the meaning of medical care at school, pushing already-burnt out professionals to their limits.

Essentially, school nurses became frontline workers during the pandemic. They had to advise schools on pandemic policies, identify symptoms in sick children and assist with contact tracing.  In a survey published in the Journal of School Nursing in 2021, almost all school nurses expressed some type of moral distress about the problems they experienced at work, which included an overwhelming workload and lack of support.

As schools continue to reopen after years of virtual learning, school nurses might be on the frontlines of a different crisis: student mental health. Deteriorating mental health among young people was already a problem before the pandemic; one in three students said they had persisting feelings of sadness and hopelessness in 2019, according to a CDC report. By the end of 2021, the Surgeon General released an advisory warning about adolescents’ soaring mental health needs.

Students coping with mental health issues might encounter a nurse who already feels overwhelmed or unprepared. One literature review on school nursing found limited research into interventions for anxiety, depression and stress. Most students, however, are in districts with no nurse or only part-time care. That means asking the school nurse for help with mental health issues simply may not be an option at all.