The root of all anti-evolutionism

The Religious Landscape Survey has a lot of data various denominations. Recently I noticed something weird about Mormons; they are very anti-evolution, as well as anti-universalist in their views on salvation, according to this survey. These are notable views because Mormons don't have well established attitudes on evolution from on high (which is why Mitt Romney expressed anti-Creationist sentiments without any blowback during the 2007-2008 campaign), and, their religious tradition actually seems to have been influenced by American Universalism, and so an exclusive attitude toward salvation is rather strange. In the case of the latter one could fudge the issue by noting Mormons believe in levels of heaven, and only Mormons themselves have access to the highest level (in particular, male Mormons who become divine). But in the soteriology of Mormonism I am to understand that only a tiny minority of human beings will spend eternity in hell (the "Outer Darkness"). So what's up with the Mormon response to this question? I think it has to do with social identification, as Mormons are now operational adjuncts to the culture of conservative Protestantism (rejection of the theses of Charles Darwin is apparently more pervasive now than it was in the 1930s on the BYU campus according to surveys published in The Creationists). I wanted to relate attitudes toward evolution as they depend on other parameters. I created indices by converting ordinal variables into integers, so that Conservatives = 1, Moderates = 0 and Liberals = -1. I weighted by the proportions, so that if a group was -0.5 in terms of political index that mean it was somewhat more liberal than not. You should be able to figure out the meaning of the signs simply by how the groups associate with each other, though I went left to right in the tables in the Religious Landscape Survey positive to negative (1, 0, -1, or 2, 1, 0, -1, -2, etc.). I estimated WORDSUM means by looking at the means for each educational class in the GSS and weighting appropriately (for black churches I used black WORDSUM means).

Here are the correlations between evolution and particular indices: Political = -0.7 (conservatives more anti-evolution) Party = 0.09 (no real difference) Education = 0.78 (more education = more accepting of evolution) WORDSUM = 0.61 (better vocabulary = more accepting of evolution) Word of God = -0.89 (More literalist about scripture being Word of God, more anti-evolution) The last is rather striking. As for the difference between political and party indices, blacks are very Democratic, not too liberal, and very anti-evolution. The greater power of education than WORDSUM again suggests to me that acceptance of evolution is simply peer-group conformity; dumb college graduates go along with their peer-group, and smart non-college folk might never have been brainwashed into Correct Thought in the ways of the world (very few people have any idea about either evolution as a descriptive or analytic matter). Here are some scatterplots which show clusters of note. Evolution index is always on the Y axis. 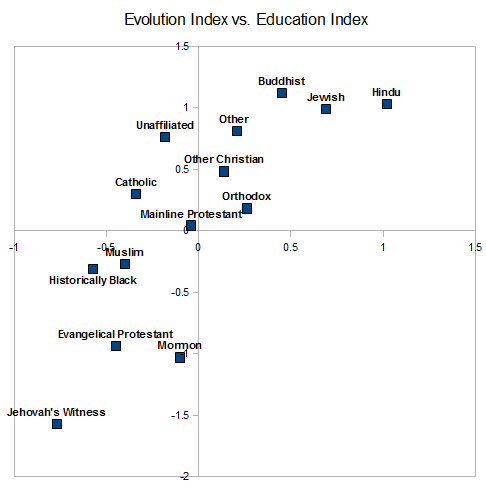 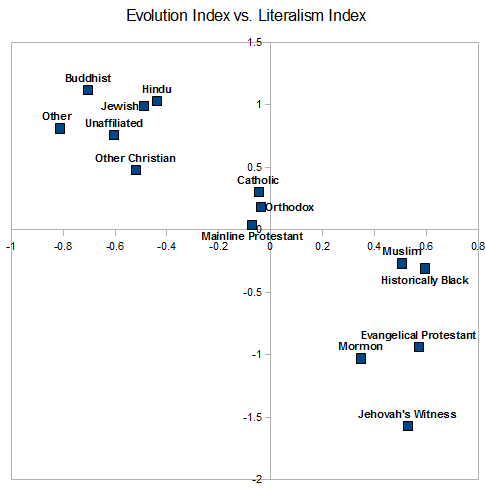 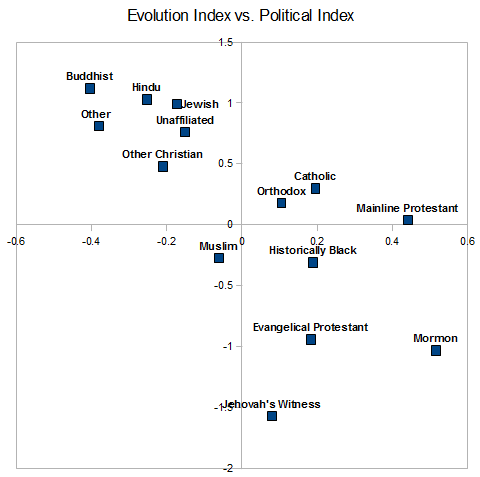