The rise of the rare variant

A fewpeople have mentioned to me a couple of newpapers in Science are out on rare variants. They're summed up in a short review article. I suspect this is going to be a big deal for some time. For humans we are coming to toward the end of the SNP-age and entering into the whole-genome-age. That means that the emphasis on common variation at the genomic level is going to give way somewhat to rarer, more particular, variation. One of the major takeaways is that a lot of this variation is going to be population specific. What I am curious about is the pattern of population specificity. For example, we could query the history of consanguinity in the Middle East, or endogamy in India, by the patterns of rare variants, which should crisply demarcate populations as a function of divergence. If I read this right we may be entering into a golden age of demographic history reconstruction, as rare variants and whole-genome catalogs of a huge number of humans are going to allow us to generate a very fine-grained map of human population diversity. Populations are only the start. Ultimately it might be highly informative to compare siblings, who may carry different mutational loads, but share much of the same genetic background. I found the figure below particularly interesting. Apparently it confirms the recent bottleneck of the Finns: 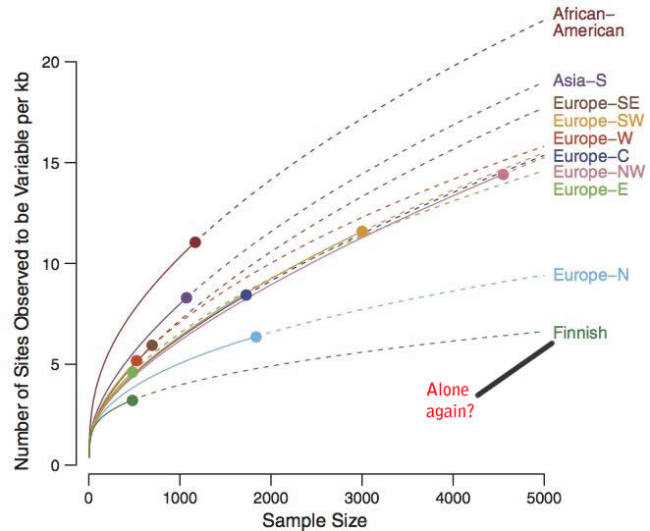