The prenatal wages of interracial relationships

It is the norm today to discuss race as a social construct. Less fashionable is it to explore race as a biological concept. When there's no up or downside and the discussion is abstract I think most people can get away with benign neglect in regards to the second; but when your health is at issue people's ears perk up. The HapMap. Here's the first paragraph in Wikipedia on the HapMap: 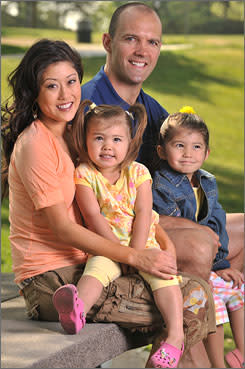 The International HapMap Project is an organization whose goal is to develop a haplotype map of the human genome (the HapMap), which will

The HapMap is expected to be a key resource for researchers to find genetic variants affecting health, disease and responses to drugs and environmental factors....

The rationale behind the HapMap is practical, but its yield has a great deal of basic science relevance. Last year's story about human adaptive acceleration does have connections with disease, but fundamentally its goal was fixated on questions of evolutionary anthropology and demographics, not clinical health. Of course "human genetic variation" can mean many things. There are after all de novo mutations which arise across the generations so that each child differs from their parents in a subset of deleterious mutants. This isn't the focus of something like the HapMap (note the point about "common patterns"), but at some point I assume that full genomic sequencing will make these comparisons more concrete so as to help develop clinical regimes that are extremely individual tailored. But on to the main topic at hand, next month in the American Journal of Obstetrics and Gynecology there will be an article on prenatal risks to pregnancies of Asian-white couples. From EurekaAlert, Asian-white couples face distinct pregnancy risks...:

It's difficult to estimate the prevalence of Asian-white couples, but 14.3 percent of Americans reporting Asian race in the U.S. Census Bureau's 2000 survey also reported being of mixed Asian-white ancestry. Although past studies have looked at ethnic differences in perinatal outcomes, the majority of research has focused on white- African-American couples. Few studies have focused specifically on Asian-white couples, said El-Sayed, who is also associate chief of maternal-fetal medicine. ... More specifically, the researchers found that white mother/Asian father couples had the lowest rate (23 percent) of caesarean delivery, while Asian mother/white father couples had the highest rate (33.2 percent). Because birth weights between these two groups were similar, the researchers say the findings suggest that the average Asian woman's pelvis may be smaller than the average white woman's and less able to accommodate babies of a certain size. (Asian couples had babies with the lowest median birth weight, so caesarean delivery was less common among those women.) It's important for clinicians to know which women may have an increased risk of caesarean delivery, so they can conduct proper counseling prior to childbirth, El-Sayed said. El-Sayed and his colleagues also found that the incidence of gestational diabetes was lowest among white couples at 1.61 percent and highest among Asian couples at 5.73 percent - and just under 4 percent for Asian-white couples. These findings weren't altogether surprising: past studies have shown an increased risk of diabetes among Asian couples, which researchers attribute to an underlying genetic predisposition. But the interesting finding, El-Sayed said, was that the risk for interracial couples was about the same regardless of which parent was Asian.

If you read this weblog you won't be too surprised. Two years ago there was a paper in Nature Genetics which reported a result that African Americans may have heightened risks for heart problems because they are a genetically admixed population. It seems that an allele which African Americans inherited from their European ancestors (20-25% of African American ancestry is European) results in inflammatory problems against a West African genetic background (deleterious gene-gene interactions). Racially mixed individuals in Hawaii seem to be more likely to be obese; the process might be purely cultural in derivation, but there might also be risks due to interaction of metabolically related loci. Finally, different frequencies in blood groups can result in higher miscarriage rates for some combinations. The first example is one where Europeans and West Africans are disjoint in allelic frequency; the genetic variation among Europeans is just not found in West Africa. The last example is one where the groups overlap, but, the average between group differences matter. In both of these cases there isn't something mystical going on; God is not smiting those who are sinning by crossing racial lines. Human spontaneous abortion rates are high. Much of this might be due to mother-child immune system responses. It shouldn't surprise anyone that people from very genetically distinct populations have very different immune profiles. One byproduct of this is to produce new and novel genetic combinations in offspring. This might result in a more robust immune system in terms of defenses against common diseases since the immune profile is so rare that pathogens haven't had to adapt against it. But, it also causes problems when it comes to tissue matching for organ transplants; mixed-race children exhibit a synthetic immune profile which has similarities with, but is rarely identical to, individuals from the two populations which their parents derive from. All this is presupposed on the viability of the offspring. What about the large number of spontaneous abortions (miscarriages)? There is some data which might suggest that genetic relatedness increases reproductive fitness, possibly because of reduced risk of immune incompatibilities between mother and fetus when the father is more closely related to the mother. It stands to reason then that as the father becomes more genetically distant the likelihood of incompatibilities might increase. All of this means that genes matter, and they matter in ways we can possibly predict. For example, imagine a population where everyone has blood group O (many Native American tribes are like this) and another where everyone has blood A (I believe this is close to true for the Blackfeet). If you make the claim (which is empirically defensible, see links above) that women who are O blood group will have much higher rates of miscarriage when they are carrying babies from males who are of blood group A, you can conclude that matings between the first population and second will have reduced fertility. But, the same applies to people from populations where there is a fair amount of blood group variation. If a woman from a village in Norway of blood group O marries a man from the same village of blood group A, even if they are cousins she will have the same heightened risk of miscarriage. There's nothing mystical in the blood here, it's simple genetics. The likelihood is a product of clear and distinct factors. Between population differences are often simply exaggerations of within population difference, though not always. Just because on any random locus 85% of the variation is found within populations and 15% between, that does not mean that on all loci 85% of the variation is found within populations and 15% between. On some genes nearly all the variance is between population and almost none of it within population. Because of the results on Caesarean section rates they adduce that there is a pelvic size difference between Asian women and white women. Objective male observer acquaintances of mine have generally tended to back up this phenotypic difference between the populations. But, that does not necessarily speak to individual experiences, that is, if the authors corrected for pelvic size on an individual level they might not need to make recourse to population level generalizations. The results on gestational diabetes not being effected by the sex combination of parents strongly imply that Asian populations have some sort of genetic variant (or variants) which arose due to mother-child genetic conflict. Does any of this matter? I think the article is a bit too unclear about rates of interracial marriage by group. Here is some data: