The politics of Indian science

A geologist, Suvrat Kher, has a very good post on the recent paper on Indian genetics. He concludes:

The Indian Press has made a hash of the finding. For example they have only reported those parts of the study that deal with the kinship among Indians and have stressed that castes and tribes cannot be differentiated or that there is no divide between the Aryans (roughly north Indians) and Dravidians (south Indians). That is all true for average relatedness. But the study also clearly points out that there are genetic differences between north and south Indians and between upper and lower caste in terms of the degree of relatedness to Eurasians. North Indians and upper castes are more closely related to Eurasians. North Indian upper castes have even more Eurasian ancestry. This part was ignored by the press. But I can't blame the press entirely. The scientists who gave interviews to the press didn't mention this. They wimped out on reporting this potential inflammatory and politically incorrect finding. This is just poor and irresponsible science outreach on part of the scientists. How can you ignore a finding that is staring out at you from the very paper you are talking about? The press may be guilty of not digging in but it was just reporting what the scientists told them. 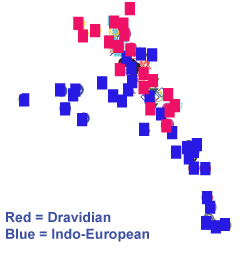 I've noticed that several Indian weblogs have linked to my previous post to prove that the Aryan-Dravidian divide is a myth! Again, look at the chart to the left. I've recoded so that Indo-European ("Aryan") and Dravidian speaking groups are blue & red respectively. They overlap, but there is clearly an average between group difference. Sometimes people will see what they want to see. It reminds me of a post I put up years ago that some Jewish groups, like non-Ashkenazi from the former Uzbekistan, don't really fit into the "Sephardic-Ashkenazi" dichotomy. Nevertheless, the first comment on the post asked if these Jews were Sephardic or Ashkenazi!