The Perfect Gift This Holiday Season: The Neanderthal Test

If you've ever wondered if your slothful spouse---he of the prominent brow and grunted endearments---has caveman blood, wonder no more. Genomics company 23andMe, purveyors of fine genotyping, would like to suggest a gift that will keep on giving this holiday season: the Neanderthal test, which will give you nagging rights for eternity. The latest gossip says the Neanderthals, the other human species kicking around about 30,000 years ago, did not leave this earth without spreading a few wild oats among our Cro-Magnon ancestors (nudge nudge, wink wink). And genetics, as so many daytime talkshow guests can tell you, is where such secrets go to die. Everyone except Africans (who missed the shackin' up party that was prehistoric Europe) now has a sort of genetic souvenir, a remnant of our forebears. That means you can now give a gift that brings new meaning to getting in touch with your heritage. Having recruited one of the biologists behind the first draft of the Neanderthal genome, who developed the test, 23andMe is able to offer you the exclusive opportunity to learn what percentage of your own genome came from those mysterious ancestors. The average is 2.5%, but some of us---perhaps someone you know, passed out on the couch this very minute---actually have much more. Ah, but what does it really mean to be 2.5% Neanderthal? Does it make you short, stocky, or heavy-browed, or bestow a penchant for furry loincloths? That's a very good question, especially since, Clan of the Cave Bear aside, we now know that Neanderthals could probably make normal speech-range sounds and were not as strange-looking as we'd once thought (oh well). But what does any heritage really mean, anyway? Most of Europe is descended from Charlemagne, too. It means precious little, though that doesn't stop it from being an endless source of fascination and totally insufferable cocktail party conversation. It's high time we slipped our Neanderthal blood into the discussion between hors d'oeuvres. 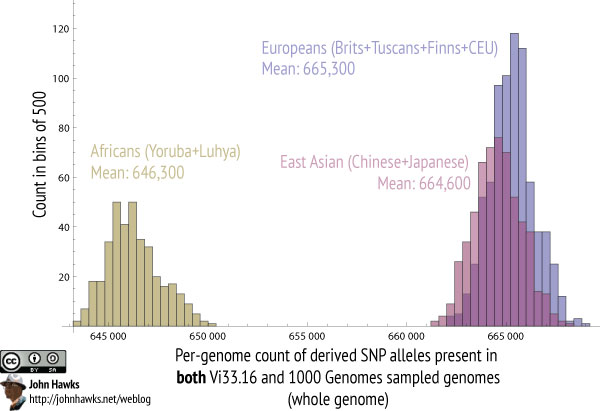 Sorry, Africa---you missed out on the interspecies breeding.