The Omentum: A Curtain of Tissue That Keeps Our Guts Working

The omentum is a curtain of fatty tissue that hangs down from our stomach and liver and wraps around the intestines. 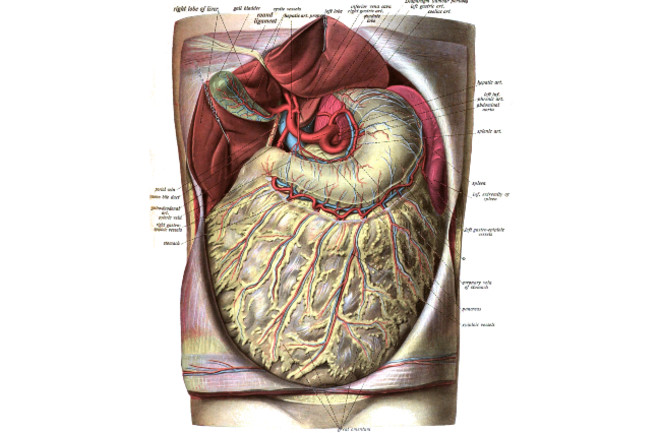 A push to renew research into an understudied gut organ is gaining momentum.

The organ in question? The omentum. It’s a curtain of fatty tissue that hangs down from our stomach and liver and wraps around the intestines, and is known to play a role in immune responses and metabolism, although exactly how that happens is only dimly understood.

Because the omentum doesn’t have a discrete function like, say, our stomach, it can be easy to overlook. But, as a new review published in the journal Trends in Immunology Thursday argues, it seems to interact with the bag of organs that makes up our digestive system in complex and important ways, fighting disease and fine-tuning how the system works to keep us in fighting shape.

Milky Spots Are Where It’s At

Most of the action in the omentum takes place in clusters of white blood cells, known officially as “milky spots,” that dot the organ. They serve as a kind of filter for the abdominal fluid that circulates through the omentum and play a role in controlling immune responses to bacteria in the gut. When a harmful microbe is detected, the milky spots kick off the release of inflammatory molecules that mount a defense. If a microbe comes in peace, the omentum can signal the gut to stand down. For its role as the arbiter of justice in the gut, it was dubbed the “policeman of the abdomen” in 1906.

The omentum likely plays a role in metabolism as well. There’s evidence that excessive build-up of the fatty tissue it’s made of can contribute to metabolic diseases, such as diabetes. Some cells included in the omentum help digest fatty acids, in addition to their immune responsibilities. Losing these cells has been correlated both with an increase in some types of obesity and sensitivity to insulin.

In some situations, the omentum can also predispose us to harm. The filter action that allows it to pluck pathogens from our digestive system can also get gummed up by cancerous tumor cells. When this happens, the cells begin to live and grow in the organ. For this reason, partial omentectomies are commonly performed when removing tumors in the abdomen, as well as during some gastric bypass surgeries.

Cutting away pieces of omentum was typically done with little thought for the consequences, because there didn’t seem to be any. And, in obese patients, this kind of surgery can help by cutting down on dangerous intra-abdominal fat. Patients function normally after having part of their omentum cut away, placing it in the same category as the appendix or the gall bladder — interesting, but non-essential.

The study authors, however, would like the medical community to reassess their conceptions of this overlooked, and at time maligned, organ. They hope that by highlighting its main functions, such as commanding our immune system’s troops into action, researchers will focus renewed attention on the omentum and the subtle but influential authority it holds over the digestive system.