The Nine Lives of George Washington

This presidential election has been notable in many regards, but perhaps most conspicuously in the preoccupation of the media with the health of the Democratic and Republican candidates. At no other time has the American public scrutinized and debated the medical fitness and stamina of the two rival candidates. In celebration of today’s grand political tradition, Election Day, the health of the inaugural president will be discussed, the gentleman whose serene gaze graces both the quarter-dollar coin and one dollar bill, he of cherry tree and hippo teeth fame, survivor of more than a half a dozen deadly plagues: George Washington. Washington’s life spanned the 18th century, an age rampant with contagious disease. All told, Washington suffered from at least nine known serious infections caused by bacteria, parasites and viruses that resulted in the deaths of his family members and contemporaries and could certainly have killed him as well. Ultimately, it would be a suffocating throat infection typically associated with children that would lead to his quick death. 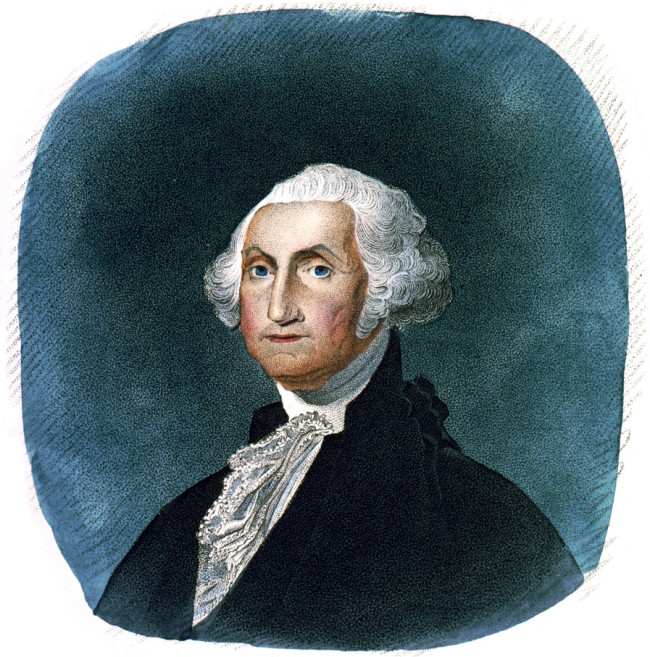 A portrait of George Washington by James Barton Longacre, ca. 1845. Image: Library of Congress. Click for source. Born in 1732 in Bridges Creek, Virginia, Washington made it through childhood and into adolescence without suffering any mortal bouts with disease, a true feat in an era lacking in public sanitation, when infections were the leading cause of death in children and especially among infants. Indeed, Washington himself would lose three siblings to illness before reaching adulthood. At age 15, however, he developed diphtheria, a bacterial infection of the throat that is now rare thanks to an effective vaccine.(1) Diphtheria is more of an intoxication than a bacterial infection, caused by a toxin that causes a remarkable throat swelling, high fevers, and even damage to the heart if the toxin distributes through the circulatory system. Washington recovered, but two years later, at age 17, he would suffer his first bout of malaria infection, an affliction that would repeatedly assail him in his 67 years. At age 19 in 1751, Washington ventured with his half-brother on a trip to Barbados. Lawrence Washington, recently diagnosed with tuberculosis, had been recommended by his physician to experience the fresh salutatory air of the Caribbean in an attempt to alleviate his bad lungs.(2) Amidst the tight and airless quarters of their seafaring voyage, Washington contracted the airborne contagion himself. Just a year later his half-brother would die from tuberculosis.

On this same luckless trip to Barbados, Washington visited a friend “with great reluctance, as the smallpox was in his family” and subsequently developed the infection just two weeks later.(3) One of the deadliest known to man, smallpox is a highly contagious virus that has killed hundreds of millions of people, thankfully now extinguished due to an excellent vaccine and hard-earned public health effort in the 1970s. Washington would survive this ailment and acquire immunity to the virus but bore the disfiguring pox scars on his cheeks for the rest of his life.(4) Nearly three decades later, during the heaviest days of the Revolution, this infection would prove to be a pivotal episode in Washington’s life and in the success of the nascent United States.

As he grew into manhood, Washington served as a major in the militia of British Virginia and as an ambassador of the British crown. During his military service in the French and Indian War, he reportedly suffered from bouts of bloody diarrhea, known as dysentery. In 1757, it forced an early retirement from the army: “I have never been able to return to my command, ... my disorder at times returning obstinately upon me, in spite of the efforts of all the sons of Aesculapius, whom I have hitherto consulted.”(3)During the Revolutionary War, Washington would be forced to reflect upon his past experiences with the deadly smallpox virus. In 1779, over half of his 10,000 strong Continental Army had contracted the debilitating virus during an epidemic, a grave tactical setback in the face of a largely immune British army.(5) “We should have more to dread from it, than from the Sword of the Enemy,” he wrote.(6) In February 1777, Washington would demand the use of an innovative technique, variola vaccination, to protect against smallpox and prevent the decimation of his troops in the face of the ensuing British onslaught.(7) He also instituted mandatory quarantine to prevent further spread of the infection among unvaccinated volunteers. By the end of the year, nearly 40,000 soldiers had undergone variolation and the rates of infection were dashed from 17% to 1%.(5) Washington’s oft-overlooked campaign against smallpox would be one of the most successful public health achievements of the era. The rest, as they say, is history. Beyond his wartime squabbles with microscopic enemies, Washington fared other debilitating contagions. During his terms as President from 1789 to 1797, he developed bouts of what he described at the time as “river fever” and “the ague,” recurring paroxysms of high fevers and diffuse muscle aches, characteristic of what we now understand to be mosquito-borne malaria infection.(3) In 1793, Washington was part of a mass Philadelphia exodus intended to escape an epidemic of yellow fever, one of the most notorious outbreaks in American history. In addition to these constant encounters with some of the most deadly diseases of the era, he also suffered other quotidian infections, such as the dental cavities and rotten teeth that would force him to wear poorly fitting dentures outfitted with large teeth carved from hippo bone. At the turn of the new century, Washington, general, President, and Founding Father, would be felled by a final infection of a tiny flap of tissue in the throat, the epiglottis. Just two years shy of his retirement from public office, he awoke in the early morning feverish and short of breath after a horse ride in Mt. Vernon during snowy weather. He underwent several harrowing medical therapies popular at that age to cure him - four episodes of bloodletting, in which he was bled of nearly two liters of blood, garglings of vinegar, applications of dried dead beetles, and a single enema.(1) After a day of such agonies, he gasped to his secretary Tobias Lear, “I find I am going, my breath can not last long. I believed from the first that the disorder would prove fatal.”(1) He died late that night, less than 24 hours after falling ill. It is believed by physicians today that, given his symptoms and rapidly fatal course, that Washington perished due to epiglottitis infection, worsened by excessive bloodletting. The first President of the United States, a war hero, public health visionary, and multi-plague survivor is believed to have borne witness to more epidemics of infectious disease than any other American president. He also suffered more than his fair share of pestilence and disease, many of these contagions being endemic in that era, and most of which have now largely been eradicated - or at least suitably corralled - due to public sanitation and vaccinations. For a man best known for fighting and winning battles, it is perhaps his personal ones with debilitating illness that are least understood, but best demonstrate his inner resolve and character. Resources

Read more about the bloodletting techniques - specifically the bloodsucking ectoparasite popular in that era - that contributed to Washington's death here.

You used to get one life. Now you get two. On the medical advances that have contributed to our longevity.

Learn more about the last days of George Washington here.