The New York Times has an article about stand-up paddleboarding. I guess that means it's now officially mainstream? It's weird to have seen a sport arise completely from scratch, over a period of just a few years. Five years ago paddleboarders were basically freaks. Now every break is teeming with them, and there's a whole industry specifically for stand-up. Even the gray lady herself is in on the game. For the uninitiated: imagine an oversized longboard (over 10 feet long), with extra width and stability. You stand up on the board, and use a long-handled paddle to propel yourself through the water. Sort of like a canoe, only standing up. It's good exercise. It's also really fun. You can really cruise. And you can enjoy it even if it's totally flat (although the real fun is to take the big boards into the surf). The rapid rise in popularity is almost certainly due to the fact that the learning curve for stand-up paddleboarding is shallow. The average person can be up and going in about 10 minutes. And it's almost like they're surfing. After all, they're standing on a surfboard, moving through the water. However, this is a pale imitation. Until you actually get the board out in the surf, and feel the acceleration of a drop, and the exhilaration as you glide down a wall of water, you have no idea what it's all about. Good paddleboarders can go out in big surf. But that part of the learning curve is Jaws steep. I was in Maui this past January, and my favorite break (Kanaha) was overrun by paddleboards. At least half the people out there were doing stand-up. For a "conventional" surfer it's a bummer, since the paddleboards catch waves early, and there's no room to drop in, even if you wanted to. But if you can't beat 'em…. About a year ago I had my initiation, doing a down-winder from past Ho'okipa to Spreckelsville. It took a while to get the balance down, but eventually you figure out where to stand, and how to use the paddle for stability. And then you're cruising. You can paddle into reasonable breaking surf, since the board has a tendency to keep going and remain unperturbed. You cut right through waves that would have tossed a longboard. However, I can tell you from painful experience that it really sucks to get Maytagged while doing stand-up. I have a nice fin-shaped scar to prove it. 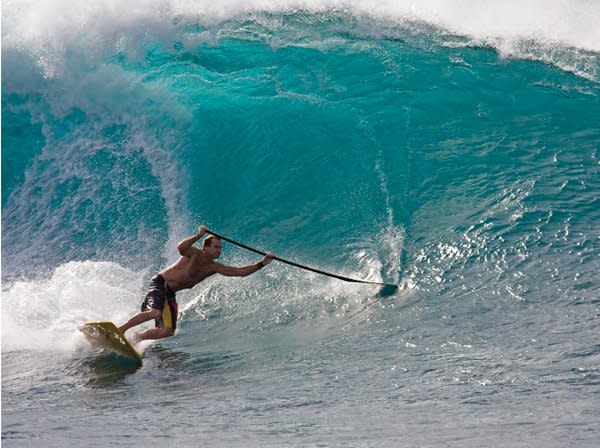