The Middle Class, Not the Poor, Eat the Most Fast Food 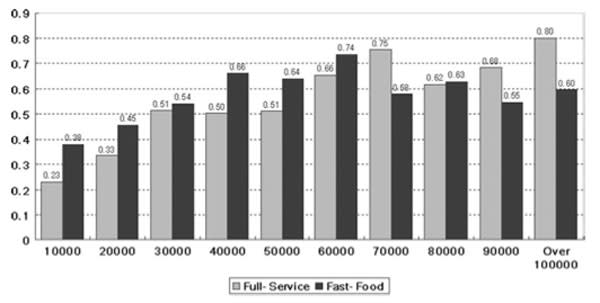 As income rises, the frequency of fast food visits rise as well, at least until income hits $60,000 a year; sit-down restaurant visits just keep on rising. (The y axis is frequency of visits.)

Obesity rates in the United States are highest among the poor

, and high up on most lists of reasons why, you'll find the truism that fast food is cheap food, and the poor, who can't afford healthier fare, are its main consumers. A new study suggests

, however, that the people eating the most fast food are middle class, with incomes as high as $60,000 a year. Using a national database of about 5,000 people, researchers at UC Davis found that the frequency of people's visits to fast-food restaurants increased with rising household income until $60,000, when frequency started to go down (though, interestingly, people making more than $100,000 still went to fast food more than those making $20,000). Visits to sit-down restaurants, on the other hand, increased with rising income and just kept on growing. The research indicates that ascribing a fast-food habit to the poor alone ignores the rest of the population's predilections and may be a distraction from other causes of obesity in Americans of all income levels. As the scientists point out, restaurant meals in general are much higher in fat than home-cooked meals, yet people with larger incomes eat out far more frequently than the poor, while maintaining lower obesity rates. Restaurants are only part of the picture. In fact, given that a straight diet of fast food is beyond the means of many poor families

, perhaps rock-bottom cheap, high-calorie foods sold in grocery stores are more of a problem than McDonald's.

Image courtesy of Leigh and Kim and Population Health Management